This is a bit old, but it is pretty much where NZ is now. The third NZ case is a relative of someone who traveled to Iran, but did not leave the country. Note: today the count is five and a bit: : one person was (ahem) Not diagnosed with ARDS secondary to a corona-type virus when had clinical signs thereof because we didn’t have the test yet, and the partner of case 3.

Nothing much has changed. Trudeau cares more about whales. Not people.

Meantime Dr Tam, Canada’s chief public health officer, is telling others who were on the flight with patient zero no quarantine is necessary. 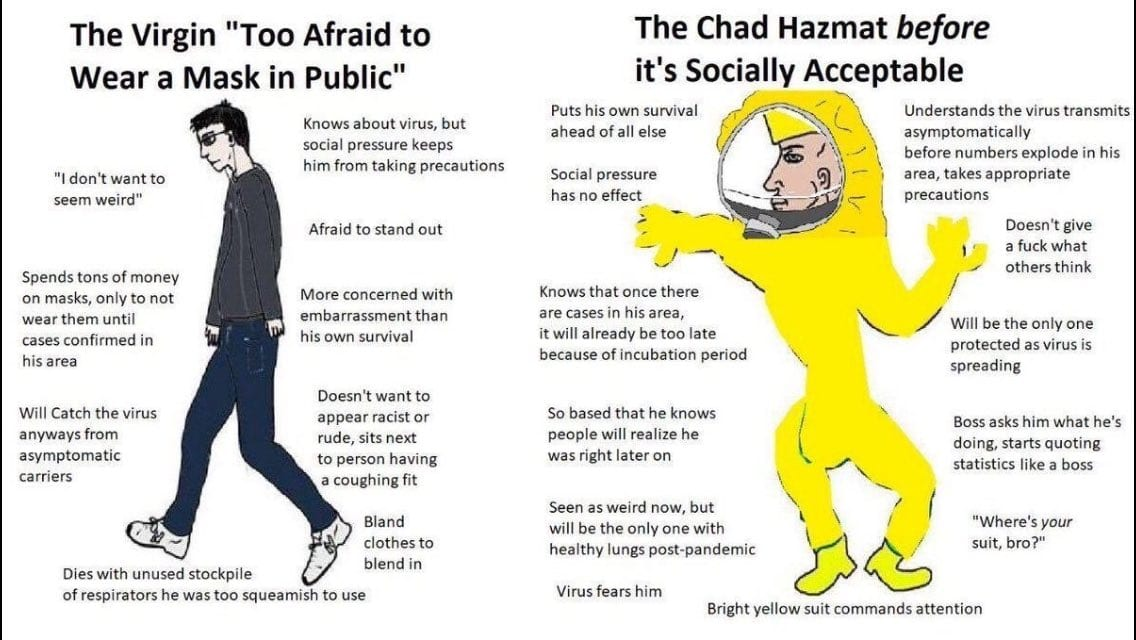 And this is starting to hit our habit of atomization. I’ve said before that son one is caring for his granddad and is worried: he should be. I was walking to a clinic yesterday in another town and directly across from the hospital was a rest home (aged care centre for the Aussies) with a slogan “safe and secure”. It made be feel it was a petri dish — like schools. Petri dishes are bad.

A story that struck me as symptomatic, as it were, of how challenging epidemiological crisis management can be in the modern West was the one reported this week about a good-will excursion of pre-schoolers to an aged-care home. After seventeen children from Banksia Cottage in Macquarie Park visited residents of BaptistCare, all had to be tested for coronavirus when a 95-year-old woman at the facility died of the illness that week after catching it from an infected nurse. Children minded by strangers visiting the elderly minded by strangers. We outsource “child care” and “aged care” and then use the very young to make up a shortfall of joy in the lives of the very old. We tell ourselves it’s a mutually uplifting practice. It’s also a neat trick. Containment and isolation, indeed. What I can’t be sure of is whether traditional stay-at-home cultures are better suited to protecting the weak from COVID-19. If China were more like Australia, would their infected population be double what it is – or are our elderly lucky to be in semi-medical facilities 24-7?

The fact is that all the cases in NZ were people who had travelled elsewhere and got through our immigration services. I’m not sure how COVID 19 started: in a genetics lab or as a crossover from another species. But it is worth considering the implications, and those who work in speculative fiction have sorted them out.

But either way, the coronavirus pandemic points to what is certain to come. In genetic engineering, we have created a monster that very well may devour the whole human race. When man seeks to play God, the results tend to be unhappy. New plagues will be generated both intentionally and unintentionally. Unlike nuclear weapons, genetically engineered diseases do not require vast facilities that cost billions. They are knowledge-based, and the knowledge is already widespread. That makes them ideal WMDs for non-state, Fourth Generation forces. WMDs in the hands of states are generally stabilizing. In the hands of non-state entities, the opposite is true.

We would do so well to remember that the Medieval world, which, contrary to what kids are taught in school, was highly successful, was brought down by the plague, the Black Death. When you lose a third, half, or even two-thirds of your population in six weeks, everything falls apart.

So what do we do about it? We have to face the fact that in the face of new plagues, Globalism is suicide. The only thing that works is quarantine. In the Middle Ages, some Italian towns saved themselves from the plague by a policy of immurement: any house where plague appeared was bricked up, with the people inside.

The equivalent for us now is to shut down all international travel. No one may enter the United States without going through a period of quarantine. The current wisdom is that a two-week quarantine is sufficient. That may change. With future genetically engineered plagues, the quarantine may have to be longer. In Thomas Hobbes’ novel Victoria, entry into Europe requires a three-month quarantine on Heligoland Island. Of course, anyone illegally attempting to enter the country and thereby avoiding quarantine must be shot dead.

In future cases, it may also be necessary to prohibit all imported goods. It should not be too difficult to create plagues that are transmitted by things: by food imports, by cars or car parts, by anything that an American might end up handling. The toxins would be designed, at least initially, to come through the skin. With genetic engineering, there is almost no limit on hideous characteristics a disease can be given. Modernity, meet your Frankenstein.

This is the future, folks; not “one world”, but many moats and drawbridges. Globalism is the chink in our armor, or perhaps going into a tournament without hauberk or cuirass. We will either armor up or listen to the cry in our streets, “Bring out your dead.”

The press is trying to engineer a panic: we ended up buying toilet paper not because we can’t make it (we can and do) but because when everyone else is panicking, ensure you have a supply. A local high school has cancelled a cricket team visiting India — but really the school should not be doing this anyway.

What will implode is the conference circuit. The idea of putting 1000 — 5000 professionals in a room to listen to experts is now a risk, as are rock concerts, religious festivals, and sporting events. Italy has cancelled the lot, and the Saudis have advised the Ummah that there will not be a haj this year. Perhaps the King of Saudi Arabia cares more for the muslims, or those Italian Northern Politicians the Guardian hates more for the people of Milan, Lombardy and Venice than our government, which is still wedded to inclusion and open borders.

If Lind is correct, this will change. Survival does trump ideology.