This week the work pressure has hit both of us hard. Some things that we should have been doing are getting close to deadline, but we have had extra work, and working by distance takes longer. We have managed some walks, but some days we are doing long hours including helping the stepdaughter with her polytech assignments and then collapsing.

The lack of structure is starting to backfire on us, under pressure, because the midday and evening walks are not happening.

Going and having some cafe treats — even though we can’t sit there, did not help.

We are now allowed to swim, row, kayak, hike, mountain bike and surf “only close to home and only if you do those things already”. It is too cold to swim in the ocean all year around and the harbour is fragrant whenever the Victorian storm-water and sewage systems overflow. What we can’t do is hit the gym.

Globally, however, our aerobic capacity has increased, and that is never a bad thing, and we are sleeping better.

We all need a minimum of seven to nine hours per night. Yet, survey after survey shows that most adults and even many children chronically get less sleep than they need. It’s no surprise that in studies, around 20 percent of the population experiences excessive daytime sleepiness.2

Obviously, the first question you should ask yourself is, “Am I getting at least seven hours of sleep per night?” Really, I’d say at least eight for most people. That doesn’t mean seven hours in bed. It takes a while to fall asleep, and most people wake up at least a couple times per night. An analysis of over 10 million users’ Fitbit data revealed that the average person is awake or restless for 25.5 minutes per night.3 If you’re aiming for seven hours of sleep, you should be in bed for eight. Want eight? Commit to being in bed for nine.

One of the reasons I don’t have a smartwatch right now is that is privacy. We are in a time when these things are being used — as are our smartphones— to monitor us. But there is more to this: the sleep monitoring is not there yet.

There are definitely problems with most of the current devices. They’re not as accurate as medical trackers. They rarely muster up to polysomnography. But they’re good for tracking overall sleep duration, and they’re getting better at tracking sleep stages. I imagine at some point in the near future we’ll have consumer devices that rival the medical ones.

And some of the newer ones, like the OURA Ring and WHOOP, can also track respiration rate and heart rate variability, which give insight into not just how you’re sleeping but also general preparedness and stress tolerance. I’ve explained the merits of HRV in the past, and although I’m not a devoted HRV-tracker, I recognize its usefulness. If I were an athlete again, I’d get a lot of use out of tracking my heart rate variability and having a “readiness” number waiting for me upon waking.

But overall, I’m not sold on their necessity.

Imagine this: You get the newest, bestest tracker to finally figure out what makes a good night’s sleep. Except things get weird.

On the days you feel exhausted, your tracker reports the previous night’s sleep as having been exemplary.

On the days you feel rested, your tracker reports poor sleep.

Who are you going to believe? The tracker or your own experience?

How you respond to this disagreement—who or what you believe—will have major ramifications for the rest of your day.

Imagine if type 2 diabetes was treated like COVID-19? With >400 million cases worldwide, we'd have to be in lockdown for a couple more decades yet. Until all active agents – sugar, vegetable oils and refined carbs (amongst others) – had been completely removed from planetary diet https://t.co/ilKexdbaIc

As I said last week, the scales are unreliable, and we have a contradiction. My shirts are loose, but weight has probably increased. My walk distance is longer, and the pace is higher. We are now exhausting the dogs. Perhaps we need to be looking a lean body mass, That decreases insulin resistance, and probably increases longevity.

Sarcopenia is a fancy word for age-related loss of muscle mass. Sarcopenia, or the decline of skeletal muscle tissue with age, is one of the most important causes of functional decline and loss of independence in older adults. Sarcopenia starts to appear in our 40s!!! Loss of muscle mass is predictive of a shorter lifespan, and worse recovery after injury or surgery. The causes of sarcopenia are debated, but it appears to be multifactorial, with neurological decline, hormonal changes, chronic inflammation, sedentary behavior, chronic illness, and poor nutrition, all looking to be related and contributing to the decline. 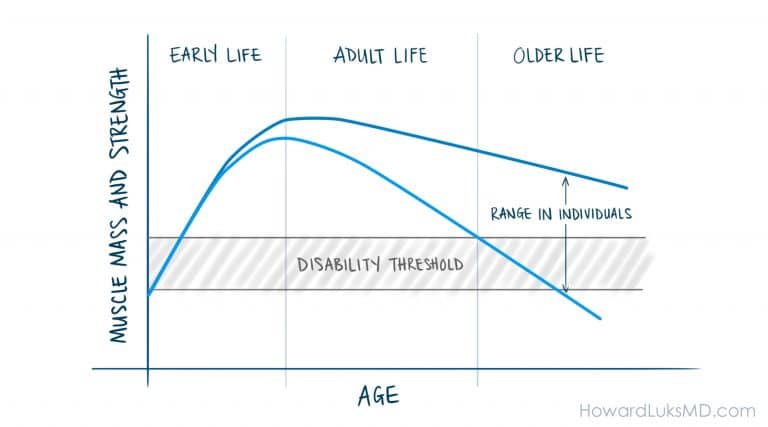 There are plenty of scales that will estimate thisplenty of scales that will estimate this from impedence, but they may underestimate your pecercentage of body fat underestimate your pecercentage of body fat if you have a BMI over 30. A good scale, however, should cost you less that $50 US. But you need to put them in the same place, preferably on a solid slab of something, not on carpet.

And it may pick up that the reason you’ve gained while your stomach shrunk is that your lean body mass is increased.