We have come out of lockdown in casa weka… grumpy. When we are stressed, like one of Ringos characters, we have been dealing with the crisis, and at times not as well. In the book, the wife has very, very good reasons to hate the military — go read it, if you have not, but be aware that John Ringo generally manages to ruin the entire world every second book. The second warning is that Baen books works like a drug dealer — the first taste is free, but the other books cost, and many a person has been hooked.

Honey,” he said, rubbing his chin and looking at the ceiling, “generals don’t recall you from civilian status, personally, to go run around in the boonies.” He dropped his eyes to meet hers and shook his head.

“Whatever it is, they’ll want me for my know-how, not my biceps. And sometimes, yeah, I wonder if being, maybe, by now, a company commander in the Eighty-Deuce wouldn’t be a little more . . . important, useful, I don’t know, something more than building a really boss web page for the country’s fourth largest bank!” He garnished the generous helping of fettuccine with a chicken breast in garlic and herbs and extended it to her.

She shook her head, understanding the argument intellectually, but still not happy. “Do you have to leave this evening?”

She took the plate and looked at it with the same suspicion as the wine. A little alcohol and complex carbohydrates to calm the hysterical wifey. Unfortunately she knew that was exactly how she was acting. He knew all about her knee-jerk reaction to the military and was trying to compensate. Trying hard.

“No, I have to be at McPherson on Monday morning. And that’s the other thing, I’m just going to McPherson. It’s not like it’s the back side of the moon.” He picked up a rag and wiped away an imaginary smear on the gray countertop. He could see the light at the end of the tunnel, but with Sharon on the warpath it could just as well be a train.

John Ringo, A Hymn before Battle

So Kea is hating the scales. Having family members, older, who don’t tolerate change and eat the standard Western Diet is bad for our waistline and for our health. We have both found ourselves aching where we have old injuries. Diet matters, or eating bad food will undo anything you have done in the last week.

This means on Monday we are back on the diet, hardcore. And we won’t be going near the chain fitness system. When I go to the gym, I have to lift, and when I’m inflamed that would injure me. Planet Fitness would ban me on day one. 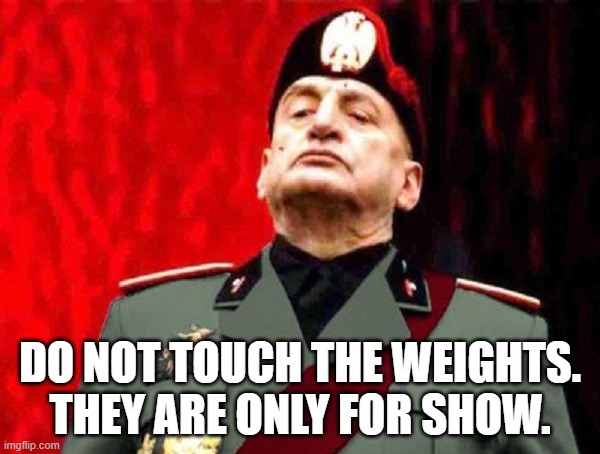 All gyms are notorious for offering a basic membership that assumes you’ll rarely show up between January 10 and December 24. I approve because it keeps fees low for the real gym rats like me. But Planet Fitness was different. They sold respectability to those lazy gits!

Come to the gym (for free food)! If people ask why you’re still fat at the gym, tell them it’s an exclusive gym for special people and they’re not allowed! Get that hoity-toity in-group feeling without the long years of melting belly fat with sweat and tears! Feel smug as we embarrass and remove the occasional hunk lunk who thinks he’s better than you! We’re available for birthday parties, too!

The good Gunner has it in for Crossfit as well, or more precisely Greg Glassman. However, I’m hoping the box survives and I can get uninjured and back. Not because I want to go into aerobic debt and get Fran Lung. But because the owner of my local box ensures I scale the hell down and stops me from going too hard. For old farts like me, weights matter and low intensity aerobic stuff: you test yourself only about once a month.

Because it will take you a week to recover from a good test. My current one is climbing the hill behind my house. For time.