A couple of days ago Kea and I left lockdown and went to get some things we needed for upcoming tasks. As part of that, we had a break in a coffee shop, The current regulations limit the number of people and the distance betweeen them and require table service, so 2 metres ahead there was a woman around our age pushing a much older woman in a wheelchair. She can no longer get around by herself. She needs help.

Moses was that age. Joshua, however, was old, but not that old. He and Caleb were grown men and leaders when Israel spied the land before 40 years of wandering in the desert, and they would now be in their 60s or 70s. Still vigorous enough, but experienced.

For while we still can, we should remain strong, and courageous, and drive out the evil from among us. For Joshua, this was a people, for us, it may be the tribe of the woke, wanting their mother to care for them until they are considered without any economic utility.

31 So Moses continued to speak these words to all Israel. 2 And he said to them, “I am 120 years old today. I am no longer able to go out and come in. The Lord has said to me, ‘You shall not go over this Jordan.’ 3 The Lord your God himself will go over before you. He will destroy these nations before you, so that you shall dispossess them, and Joshua will go over at your head, as the Lord has spoken. 4 And the Lord will do to them as he did to Sihon and Og, the kings of the Amorites, and to their land, when he destroyed them. 5 And the Lord will give them over to you, and you shall do to them according to the whole commandment that I have commanded you. 6 Be strong and courageous. Do not fear or be in dread of them, for it is the Lord your God who goes with you. He will not leave you or forsake you.”

7 Then Moses summoned Joshua and said to him in the sight of all Israel, “Be strong and courageous, for you shall go with this people into the land that the Lord has sworn to their fathers to give them, and you shall put them in possession of it. 8 It is the Lord who goes before you. He will be with you; he will not leave you or forsake you. Do not fear or be dismayed.”

9 Then Moses wrote this law and gave it to the priests, the sons of Levi, who carried the ark of the covenant of the Lord, and to all the elders of Israel. 10 And Moses commanded them, “At the end of every seven years, at the set time in the year of release, at the Feast of Booths, 11 when all Israel comes to appear before the Lord your God at the place that he will choose, you shall read this law before all Israel in their hearing. 12 Assemble the people, men, women, and little ones, and the sojourner within your towns, that they may hear and learn to fear the Lord your God, and be careful to do all the words of this law, 13 and that their children, who have not known it, may hear and learn to fear the Lord your God, as long as you live in the land that you are going over the Jordan to possess.”

One of the things that people forget is that the law was to be read. it was public — it was not to be hidden away. Every year of release, when debts were to be expunged, the law was to be read at the festival of the booths. This is not honoured in this time when bankers buy politicians who micro-regulate our worship and gatherings while insisting that our debt is multi-generational, often pushing the law they made beyond what is written

One of the other things that happened over the weekend is that we met another professional photographer. He noted that the lockdown had been the first time in six years that he had a break. Our move to working 24/7 without any breaks is bad for us.

And we all need a break. If we do not, as a society, regulate such, we will found that circumstances bring them upon us.

In the meantime, do judge this time by the consequences to those who become as promoted. Instead, be strong and of good courage. 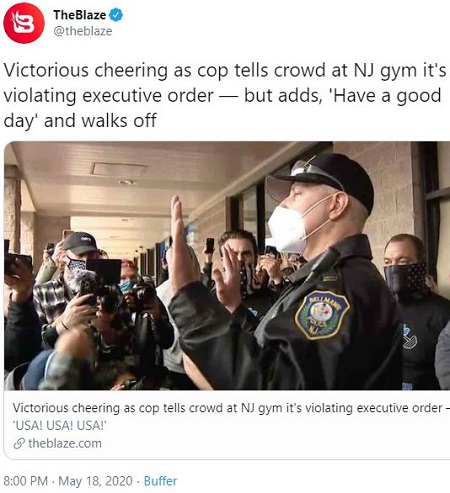 A few hours after workouts began Monday morning at New Jersey’s Atilis Gym — which is making national headlines for its early reopening in defiance of Democratic Gov. Phil Murphy’s coronavirus shutdown order — police showed up outside the Bellmawr business.
What happened next?
The large group of people outside the gym were angry and hostile, likely believing the officers showed up to shut down the gym, hand out tickets, or even make arrests.
Soon enough the crowd quieted down enough so that one of the officers was able to address them.
“We are and we’re only here for everybody’s safety today,” the officer began. “We planned for the worst, hoped for the best, and it seems like that’s what we have out here today. Formally, you are all in violation of the executive order.”
Then came the officer’s surprising follow-up statement: “On that note, have a good day. Everybody be safe.”

The elite of this time will soon be one with the Amorites, Seek good, and may the word of God dwell richly with us during this crisis. The elite want us to forget such. But we were never called to be like them.