Sometimes the passages we have write read as if they were editorials for the passage of this day. We are being attacked by people who are aligned with evil, and it is our duty to state this clearly and without apology. Context.

I was wrapping up the writing on Wednesday’s post when the events in Kenosha happened. By events, I mean where Kyle Rittenhouse allegedly killed two people and wounded a third. I say allegedly, because even though I saw it from nearly six different angles, nearly in real time, by saying allegedly that makes me sound official. And my attorney Lazlo says it makes it harder for Leftists to sue me.

What I saw was fairly simple. It was a 17 year old kid who ran from someone who was allegedly going to hurt him. I allegedly saw a muzzle flash, which meant that someone shot at Kyle as he was fleeing. A melee ensued, and several shots can be heard on the video.

Kyle is then seen on video, first looking to provide medical care to the man on the ground, and then talking on his cell phone. The dying man on the ground is 5’3” manlet Joseph Rosenbaum. Rosenbaum was an ex-convict who had spent nearly a decade in jail for sexual misconduct with a minor, who was required to register as a sex offender for the rest of his life. Clearly, Rosenbaum was a gem of a manlet.

Rosenbaum made the mistake of chasing someone with an AR-15.

This was not allowed to stand. Rittenhouse was arrested, and he is now lawyered up. The court case will continue for longer time than the riots will. But there are some liberal Jews who don't care that Ronsenbaum was chasing a 17 year old, with malice intended. Because he was Antifa, he was righteous. They call evil good. 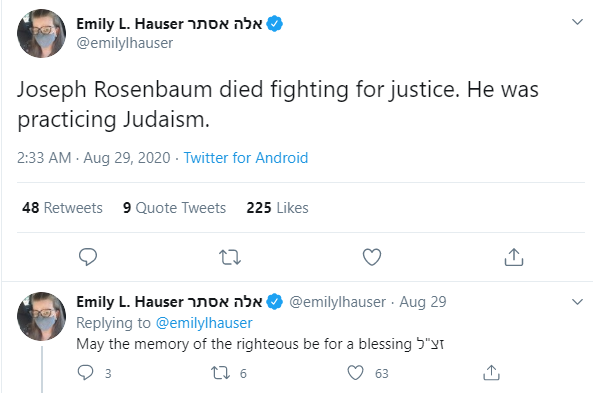 Joseph Rosenbaum was convicted of raping five young boys and died violently attacking a teenager. For this, he was deemed righteous by his fellow Jews.

The observable truth is that there are two and only two options presented to every soul. The Way, the Truth, and the Life, or de facto submission to the god of this world. No exceptions... although there are clearly those who have chosen de jure submission and the express lane on the highway to Hell. And the metric for distinguishing the latter is a straightforward and long-established one.

Woe unto them that call evil good, and good evil; that put darkness for light, and light for darkness; that put bitter for sweet, and sweet for bitter!

It is now shooting time in the USA. Over here, it is likely that we will have regional lockdowns. It may not be too late to move, but in Auckland you can't meet in groups of more than 10, and Australia is arresting people for planning protests on facebook.

The warning is here. We just have to take our headphones off.

Australian police officer who signed warrant for pregnant 'anti-lockdown' mom is under investigation for corruption. @MiaCathellhttps://t.co/C6oiFWa9m2

🚨BREAKING🚨 The Victoria police are out of control, now busting down doors over FB posts. @ScottMorrisonMP The line has definitely been crossed.

You’ll be meeting with @DanielAndrewsMP today!

33 The word of the Lord came to me: 2 “Son of man, speak to your people and tell them, ‘Suppose I bring the sword against a land, and the people of that land select a man from among them, appointing him as their watchman. 3 And suppose he sees the sword coming against the land and blows his ram’s horn to warn the people. 4 Then, if anyone hears the sound of the ram’s horn but ignores the warning, and the sword comes and takes him away, his death will be his own fault. 5 Since he heard the sound of the ram’s horn but ignored the warning, his death is his own fault. If he had taken warning, he would have saved his life. 6 However, suppose the watchman sees the sword coming but doesn’t blow the ram’s horn, so that the people aren’t warned, and the sword comes and takes away their lives. Then they have been taken away because of their iniquity, but I will hold the watchman accountable for their blood.’

Matthew 23:29-36
29 “Woe to you, scribes and Pharisees, hypocrites! You build the tombs of the prophets and decorate the graves of the righteous, 30 and you say, ‘If we had lived in the days of our ancestors, we wouldn’t have taken part with them in shedding the prophets’ blood.’ 31 So you testify against yourselves that you are descendants of those who murdered the prophets. 32 Fill up, then, the measure of your ancestors’ sins!

33 “Snakes! Brood of vipers! How can you escape being condemned to hell? 34 This is why I am sending you prophets, sages, and scribes. Some of them you will kill and crucify, and some of them you will flog in your synagogues and pursue from town to town. 35 So all the righteous blood shed on the earth will be charged to you, from the blood of righteous Abel to the blood of Zechariah, son of Berechiah, whom you murdered between the sanctuary and the altar. 36 Truly I tell you, all these things will come on this generation.

Be very careful of the self righteous: this includes the press, whose besetting sin is wrath. One of the reason to avoid the mainstream media and social media is that it tends to make you angry: or, in the case of Pravda One, fearful and trapped.

As one friend said in an email a few days ago:

More context. I did not write this, but this week has been very stressful and busy, and that is before we found that there were two deaths from the second wave of COVID 19 in South Auckland yesterday. Which his home hard: I grew up there.

I had to deal with a lot of drama and craziness during that time, but that was as nothing compared with what happened in the USA. It would appear that over the last few days, the Cold War between Right and Left has gone from Hot, to Boiling, to Holy SHIT The Shooting's Starting!!!

And honestly, at this point, the shooting is well overdue.

There is simply no accommodation with the Marxist regressive Left anymore. They have made it very clear exactly on which side of the dividing line between Good and Evil that they stand on. They have chosen their path. Let them stand or fall depending on that choice.

I realise that a lot of people are very uncomfortable with seeing the world in such explicitly Manichean, or black and white, terms. I know why. The world is full of greys and it is right and good to acknowledge them and seek out nuance and understanding where possible.

But it is impossible to seek out accommodation with people who want you dead for the simple fact of your skin colour, your political beliefs, or your willingness to defend your own property.

At this point, if the breaking has to happen, if Civil War Round 2 has to start, then for God's sake, let it be DONE already - with as little bloodshed, horror, and misery as possible.

Now, I am realistic about the prospects of all-out war. It's not going to happen tonight, or tomorrow, or anytime within the next few months - not until at least Election Day USA, November 3rd.

After that, though, all bets are off

We don't have to look far to see evil now. It is time to choose sides. There are true prophets out there, but when even those of us who merely match patterns can see what is coming, take heed.

Cling to Christ and to truth and honour. Because the other side does not. With Christ, nothing in the world can control us. In living well, we will proclaim the goodness of God. But this virtue signalling? It will not save you. That time is past. Get yourself right with God, and then sing hymns.

Because the church will be revived and militant, or the nation will fall.