Bumped into an old mate today. Said I’m a joy germ. I commented that the only way I am coping with the bad shite is by not adding to it. I’m not watching the news media. I’m not getting involved in twitter wars. I have weaned myself from the dopamine hit of likes.

There is enough going on in real life right now. We have green twits putting more than themselves at risk. Saw this protest as we drove past this morning. The motivation to by a diesel v8 is increasing.

Climate activists have locked themselves to the railway tracks at the Dunedin Railway Station blocking a train transporting coal.

There are about 15 activists from Extinction Rebellion at the protest this morning. About seven people are on the tracks and two of them are physically clipped onto the tracks wearing face masks that say ‘no to coal’.

They have been here since about 6.30am.

Several police officers are also at the scene.

The train was bringing coal from Bathurst Resources’ Takitimu mine in Southland to Fonterra’s Clandeboye milk factory in Canterbury.

KiwiRail Dunedin operations manager Jamie McFarland said the protest had caused a massive disruption to its service, not only locally, but to the wider South Island network.

‘‘The biggest problem I have is that they have recklessly endangered themselves and also my staff.’’

During their last protest, during the markets, staff had not been immediately aware that there were people on the tracks, he said.

‘‘It is a shame — there are other ways to get your message across.’’

In other news, tourism is basically dead. The borders look like they will be closed throughout 2021. Kea is glad because I all meetings will be zoom, which are less hassle.

All yr stonks r belong 2 us

Never bet against the weaponized Autists. They are not in the market to make money, but for the lulz. The tears of the professional market manipulators are the points. The destruction of the market is the goal. One firm at a time.

The sight of karma hitting the banksters is clear to all.

Popular subreddit r/WallStreetBets (WSB), whose tagline is “Like 4chan found a Bloomberg Terminal,” has over 2 million members reading and posting “stonks” tips and news. Its biggest obsession in recent weeks has been raising the stock price of GameStop, the old-school video game mall retailer.

Lindzon thinks the investors chatting across Reddit — who tend to be millennial and Gen Z men — are just having a fun time causing trouble for hedge funds who’d bet on shares in the gaming retailer dropping. “They’re just playing a game,” he said. “And they’re having a blast.”

Here is the princple, taken from the Vox Popoli.

Everything that Globohomo builds is ultrafragile… Political, cultural, financial… They are masters of plastic and duct tape with deviltry for mortar.

Watching it all crumble is a good reason to get healthy and stay alive. Wouldn’t want to miss any of it!

The few adults in the room have forgotten that you should have left the autists with their games. All they wanted to do is play and go to the gym. But now they are after blood, and the SEC is afraid.

We are aware of and actively monitoring the on-going market volatility in the options and equities markets and, consistent with our mission to protect investors and maintain fair, orderly, and efficient markets, we are working with our fellow regulators to assess the situation and review the activities of regulated entities, financial intermediaries, and other market participants. 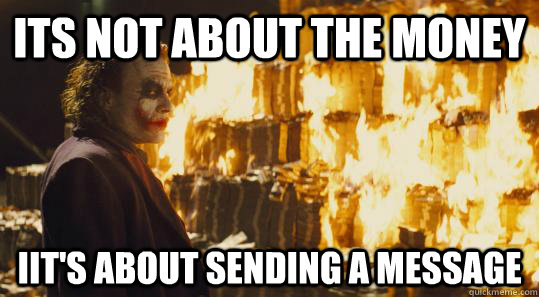 Obligatory Disclaimer. I live in NZ. I am not a financial advisor. I don’t play the US stock market. I prefer that the IRS does not know I exist. Any investments I have are property or via kiwisaver.

The mainstream media is dying. When we pulled the cord from the TV the only thing I was trying to find on the TV was fixer upper and windy city rehab, so we can get ideas. I learn by reading, and Kea is more visual so books and magazines are a faster way for us to understand things than video. But the woke media are afraid, and unstead of considering, to their horror, that they may be wrong, they are blaming those who don’t care.

As many have pointed out, Gamergate was by no means the beginning of the rise in extremism; the fault lies with a broad cocktail of factors ranging from centuries of racism, to decades of neoconservative grassroots organizing, to the rise of conservative media and online echo chambers, to internet recruitment by actual white supremacists, and much more.

Note to the woke: the gamer’s don’t care. They have lost any chance of promotion. They have never fitted into the toxic high school culture which infested the academy and corporations. Many have been sacked. Others know they won’t get promoted.

So they don’t care about your feelings. They want to win. And they will make sure they know the real rules.

They don’t care if they lose money with their actions. They will fight all the way. Such people are impossible to deal with. You make them your enemy at your peril, because they will enjoy making your life miserable for longer than you will enjoy the pleasure of a tempoary win.

They are now trying to get laws stacked against them. This won’t work. Even the SDL knows that when you have a certain type of person after you, make it right.

Spacebunny once observed that she’d never seen me back down the way I downright hastened to make things right with a world-class individual a few years ago.

Even dark lords know their limits….

But the woke are midwits. Midwits are dangerous.

Did not think that this was a form of scrubbing (repeatedly doing tasks to get points in a game) but it is, it is.