The battle is spiritual and most people are not prepared to consider that. This world hates the idea of fatherhood, and the concept of God as a good father is hate speech. Gathtering ias a congregation to praise God is deemed illegal. They will mercy kill the inconvenient but fro fear of a virus not allow worship.

There are indeed Antichrists in Alberta.

Coates’ attorney, James Kitchen, said the preacher is willing to remain behind bars in order to do the “right thing,” according to CTV News.

In mid-December, Alberta Health Services inspector Janine Hanrahan issued an order against GraceLife, directly mandating the church to ensure all congregants, staff members, and leaders are wearing masks while on the property, to enforce social distancing of at least six feet between all persons, and to restrict occupancy of the facility to 15% or less of the building’s total operational capacity.

AHS then filed a court application in January to enforce the order through the courts. The application named Coates, granting the health agency the power to jail the pastor if he continued to hold worship services in violation of government edicts, according to the Justice Centre, which is representing the minister.

Kitchen described the orders in place in Alberta as “reminiscent of what one encounters in dystopian novels such as George Orwell’s ‘1984.’”

“The congregants of GraceLife refuse to accept the Alberta government’s dystopian ‘new normal,’” the attorney said. “Their first loyalty is to obey their God, not government. They are committed to gathering, as they always have, for in-person worship services. They will challenge this excessive and unlawful government oppression rather than turn their back on their beliefs. They also believe they are lawfully exercising their Charter-protected freedoms and that the government’s restrictions are not justifiable.” 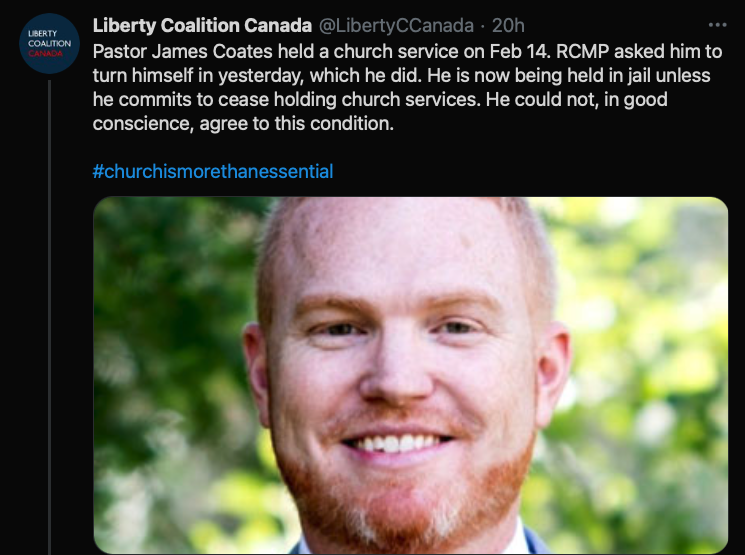 What to do> The first thing is realize that the problem is spirutal, and use the correct tools. These are prayer, intercessory prayer. This is sacrificial, because a fair number of the people that we will be praying for hate us and want us in jail. The crisis is upon us, and the hatred is openly displayed. All their inter-sectianality is dog whistles. For the hatred of Christ and his church.

15 And now, O Lord our God, who brought your people out of the land of Egypt with a mighty hand, and have made a name for yourself, as at this day, we have sinned, we have done wickedly.

16 “O Lord, according to all your righteous acts, let your anger and your wrath turn away from your city Jerusalem, your holy hill, because for our sins, and for the iniquities of our fathers, Jerusalem and your people have become a byword among all who are around us. 17 Now therefore, O our God, listen to the prayer of your servant and to his pleas for mercy, and for your own sake, O Lord, make your face to shine upon your sanctuary, which is desolate. 18 O my God, incline your ear and hear. Open your eyes and see our desolations, and the city that is called by your name. For we do not present our pleas before you because of our righteousness, but because of your great mercy. 19 O Lord, hear; O Lord, forgive. O Lord, pay attention and act. Delay not, for your own sake, O my God, because your city and your people are called by your name.”

20 While I was speaking and praying, confessing my sin and the sin of my people Israel, and presenting my plea before the Lord my God for the holy hill of my God, 21 while I was speaking in prayer, the man Gabriel, whom I had seen in the vision at the first, came to me in swift flight at the time of the evening sacrifice. 22 He made me understand, speaking with me and saying, “O Daniel, I have now come out to give you insight and understanding. 23 At the beginning of your pleas for mercy a word went out, and I have come to tell it to you, for you are greatly loved. Therefore consider the word and understand the vision.

24 “Seventy weeks are decreed about your people and your holy city, to finish the transgression, to put an end to sin, and to atone for iniquity, to bring in everlasting righteousness, to seal both vision and prophet, and to anoint a most holy place. 25 Know therefore and understand that from the going out of the word to restore and build Jerusalem to the coming of an anointed one, a prince, there shall be seven weeks. Then for sixty-two weeks it shall be built again with squares and moat, but in a troubled time.

4 I charge you in the presence of God and of Christ Jesus, who is to judge the living and the dead, and by his appearing and his kingdom: 2 preach the word; be ready in season and out of season; reprove, rebuke, and exhort, with complete patience and teaching. 3 For the time is coming when people will not endure sound teaching, but having itching ears they will accumulate for themselves teachers to suit their own passions, 4 and will turn away from listening to the truth and wander off into myths. 5 As for you, always be sober-minded, endure suffering, do the work of an evangelist, fulfil your ministry.

This is what we need to do at this hour.

Firstly, pray. We may understand the times, but we don’t have the whole picture. We need to pray for our nations — that they will become based, and kick out the vectors of corruption.

The second is preach the gospel. I’ve always said that the core of this place is the lectionary posts that are not read that much. But the word of God is active and will not return without a result. I think part of the reason that we are in transition right now is that I’ve offended the right on pagans I live among. They don’t want the hard word of the gospel. They want to be told that the are enlightened, spiritual, as Gods.

Here mockery and memes may help.

Thirdly is to help the brotherhood. In Christ. You help the brothers and teach them how to help their wives and kids. You make a patriarchy, and you don’t ask for permission. This also will draw people to Christ. Wives, demand that your husband leaves and then submit when he does.

And our happiness and love will be either the cause of repentance and revival or as burning coals to our enemies in this life. God has his timing. We are here to give him the glory.

Hmm. What do you suppose would happen if the congregation were to continue to show up anyway. There are certainly enough copies of the church keys around that one could be made available each Sunday. How many people would have to be put into that same jail before the authorities might decide it wasn’t worth the effort? And if the judge attempted to set bail, just refuse to pay it and stay in jail. I’ll bet the congregation could cover a few days of lost wages for the people so imprisoned.

Yes. Alberta. Once the Bible Belt of the prairies….now a synagogue of Satin