Yesterday, or the evening before, I was talking about the passages for the day and how Sarai had asked Abram to make one of her serving women, Hagar, his concubine. Then she got pregnant. Kea was horrified: was that acceptable in those times? Of course you would want to beat her up: she had your man! Here is the text, because it leads into todays.

It is worth noting that Hagar was Egyptian, and she got a wife for Ishmael from Egypt. It's also worth noting that Ishamel was not the child of promise, and that the plans that Sarai made to have a son she could adopt into the family failed. It may have been licit, but the raw emotions here were such that Hagar fled.

16 Now Sarai, Abram's wife, had borne him no children. She had a female Egyptian servant whose name was Hagar. 2 And Sarai said to Abram, “Behold now, the Lord has prevented me from bearing children. Go in to my servant; it may be that I shall obtain children by her.” And Abram listened to the voice of Sarai. 3 So, after Abram had lived ten years in the land of Canaan, Sarai, Abram's wife, took Hagar the Egyptian, her servant, and gave her to Abram her husband as a wife. 4 And he went in to Hagar, and she conceived. And when she saw that she had conceived, she looked with contempt on her mistress. 5 And Sarai said to Abram, “May the wrong done to me be on you! I gave my servant to your embrace, and when she saw that she had conceived, she looked on me with contempt. May the Lord judge between you and me!” 6 But Abram said to Sarai, “Behold, your servant is in your power; do to her as you please.” Then Sarai dealt harshly with her, and she fled from her.

Ishmael was predicted, before his birth, to be at enmity with his brothers. He was also predicted to be the father of multitudes. God did not abandon Hagar because of the errors of Abram or Sarai. But there was a cost. She had to return to her mistress, and submit, because of what was to come. Hagar did this. Her child is that from whom the Arab nations claim ancestry. 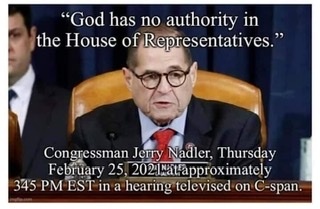 This will end badly. Ishmael knew to call upon the Lord, as did his mother. His line was not the line of promise, and he was predicted to be a man of violence, but he knew there was a God over Israel. These apostates do not, and it will end very badly for them.

For those who do not understand, the same 1% sending the FBI to hunt down Americans ruthlessly with a new Attorney General focused on that vendetta, the reality is, that God is even more ruthless and thorough on entire nations and those who think they are above the Law of God.

Ponder that, in the bastardization of law by the regime in DC and other nations, in how they are subverting it to engage in witch hunts. God's Law is pure, and you must comprehend this God which the peoples now think won't do anything and they have all this social security and government money and arms to protect them, that they think they are untouchable, but the fact is Babylon was wiped out, Ninevah was wiped out. Saramaria was wiped out. Jerusalem was wiped out, Athens was wiped out, Rome was wiped out, Berlin was wiped out. God sends His Holy Angels into the dark hiding places and there makes reckoning thorough.

Unlike Lame Cherry, I am no prophet. However, I do understand pattern recognition. At this time, a fair number of employers and the state -- which manages most businesses by regulation if not outright ownership -- is not good to work for. They don't beat us. Instead they want our souls.

Though we want to run away, we have to live in this world and work in this world. But we have a promise attached to us. The people who rule this world do not, and every time they have tried to make humans better it has ended in rivers of blood -- shed by them, before their blood is shed.

Any sane man fears the true justice of the LORD, and instead seeks mercy.

“Behold, you are pregnant
and shall bear a son.
You shall call his name Ishmael,
because the Lord has listened to your affliction.
12 He shall be a wild donkey of a man,
his hand against everyone
and everyone's hand against him,
and he shall dwell over against all his kinsmen.”

13 So she called the name of the Lord who spoke to her, “You are a God of seeing,” for she said, “Truly here I have seen him who looks after me.” 14 Therefore the well was called Beer-lahai-roi; it lies between Kadesh and Bered.

15 And Hagar bore Abram a son, and Abram called the name of his son, whom Hagar bore, Ishmael.

I thought that the Kiwi and Aussie Parliaments were corrupt and run by people who had taken the ticket. But the current congress of the USA seems to ignore any sense of righteousness, in their aim to get us to worship the woke and the tolerant. God is our King. It is he whom we worship. Institutionalised Apostasy does not end well.

The House passed House Passes Equality Act to End Legal Recognition of Biological Sex Equality Act Thursday, which would eliminate the legal definition of biological sex, cater to gender ideology, and designate protection for the unborn as “pregnancy” discrimination.

The House passed H.R. 5, the Equality Act, 224-206. Three Republicans voted for the legislation.

The legislation would rewrite civil rights law to include “sexual orientation and gender identity” as protected classes.

Rep. Louie Gohmert (R-TX), who voted against the legislation, decried the bill as attacking religious freedom, said on the House floor before the vote, “What this bill, the so-called Equality Act, is really about, it’s not about giving rights, this is about taking away rights. This is saying that part of the First Amendment that states, ‘Congress shall make no law respecting an establishment of religion, or prohibiting the free exercise thereof;’ that’s gotta go!”

More on this from the Federalist

The two of us went our ways, carefully navigating the icy bricks back to the safety of our homes. The monsignor was right, of course: If the Equality Act passes, he won’t be safe in his home much longer, nor will women be safe in their sports, their restrooms and locker rooms, the nail salons they work in, nor even shelters from homelessness and abuse.

The act, which the House is expected to pass for the second time in nine months on Thursday before sending it to a now-Democratic Senate, opens up swinging on Christian (as well as most religions’) concepts of morality in marriage, sex, and identity. It would strike biological sex from the 1964 Civil Rights Act, replacing it with “sexual orientation and gender identity.” Belief in traditional marriage, the act would legislate, is a specific example of illegal discrimination.

If the bill passes the Senate, our church parishes will become soft targets. While weak-kneed men like David French confidently celebrated the migration of drag queens from rowdy, seedy city bars to children’s library story hours as “blessings of liberty,” it will be curious to see what he thinks when parish halls are subjected to those same blessings.

It’s all made possible by massively expanding the government’s definition of bigotry, as well as the definition of public gathering places to include any place that “provides exhibition, entertainment, recreation, exercise, amusement, public gathering or public display.” When you add the above to “any establishment that provides a good, service, or program,” you’ve put nearly the entirety of American civic life under the thumb of radical activists.

And they’re not remotely done. Unhappy with the restrictions on eligibility that Catholic and other religious adoption agencies put on families looking to take children into their homes, the act seeks to nationalize Massachusetts, New York, and California’s outright bans on religious adoption agencies’ right to operate according to conscience. Never mind that there are any number of secular adoption agencies with no traditional marriage guidelines; shutting down the organizations that invented adoption, the bill states, will “increase the number of homes available to foster children.”

Meanwhile, Catholic school and other forms of religious education, rare alternatives to increasingly failing and liberal public education, will be compelled by the act to teach a concept of marriage antithetical to their faith, as well as the popular but absurd claim that boys can be girls and girls can be boys.

There are memes about this. Fairly violent ones. I expect that this will go down as well as resurrecting civil development in Portland while letting antifa rage.

The question is always whom do you serve. Is it Christ, or is it his enemy? I can disagree with those who are of Christ, but I am not the one who makes the judgement on their lives. Christ is. But I can call out those who deny him. In the church and outside the church: as Gunner Q points out, if you are deemed successful by this world the world generally owns you.

The world has its narrative. We have the truth.

27 And Jesus went on with his disciples to the villages of Caesarea Philippi. And on the way he asked his disciples, “Who do people say that I am?” 28 And they told him, “John the Baptist; and others say, Elijah; and others, one of the prophets.” 29 And he asked them, “But who do you say that I am?” Peter answered him, “You are the Christ.” 30 And he strictly charged them to tell no one about him

Hagar and Ishmael had sin within them: it is part of the human condition. He was at emnity with the house of Isaac and Israel. But he did not deny the truth. He did not say that what is wrong is right. He did not demand that everyone worship him. He knew he was not God.

This bunch are playing with things that they do not understand. Their version of "science" is orthogonal to scholarship and experimentation. This will end badly.