It’s worth noting that the Briggs notes that Books I-III of Summa are understandable by human reason, but book IV is not. My thought is that Calvin and Aquinas agree on predestination. They are both against Arminius, who considered that we choose salvation or not.

1 So, since we have shown that some men are directed by divine working to their ultimate end as aided by grace, while others who are deprived of the same help of grace fall short of their ultimate end, and since all things that are done by God are foreseen and ordered from eternity by His wisdom, as we showed above, the aforementioned differentiation of men must be ordered by God from eternity.

According, then, as He has preordained some men from eternity, so that they are directed to their ultimate end, He is said to have predestined them. Hence, the Apostle says, in Ephesians (1:5): “Who predestinated us unto the adoption of children… according to the purpose of His will.”

On the other hand, those to whom He has decided from eternity not to give His grace He is said to have reprobated or to have hated, in accord with what we find in Malachi (1:2-3): “I have loved Jacob, but have hated Esau.” By reason of this distinction, according to which He has reprobated some and predestined others, we take note of divine election, which is mentioned in Ephesians (1:4): “He chose us in Him, before the foundation of the world.”

3 Moreover, that predestination and election do not find their cause in any human merits can be made clear, not only from the fact that God’s grace which is the effect of predestination is not preceded by merits but rather precedes all human merits, as we showed, but it can also be shown from this, that the divine will and providence is the first cause of things that are done, but that there can be no cause of the divine will and providence, although, among the effects of providence, and likewise of predestination, one may be the cause of another.

We all have the same problems. Perverted and false priests and pastors. And sluggish minds. None of us can comprehend the mind of God. 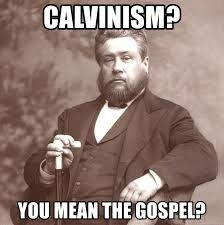 9. But since our sluggish minds rest far beneath the height of Divine Providence, we must have recourse to a distinction which may assist them in rising. I say then, that though all things are ordered by the counsel and certain arrangement of God, to us, however, they are fortuitous,–not because we imagine that Fortune rules the world and mankind, and turns all things upside down at random (far be such a heartless thought from every Christian breast); but as the order, method, end, and necessity of events, are, for the most part, hidden in the counsel of God, though it is certain that they are produced by the will of God, they have the appearance of being fortuitous, such being the form under which they present themselves to us, whether considered in their own nature, or estimated according to our knowledge and Judgment. Let us suppose, for example, that a merchant, after entering a forest in company with trust-worthy individuals, imprudently strays from his companions and wanders bewildered till he falls into a den of robbers and is murdered. His death was not only foreseen by the eye of God, but had been fixed by his decree. For it is said, not that he foresaw how far the life of each individual should extend, but that he determined and fixed the bounds which could not be passed (Job 14:5). Still, in relation to our capacity of discernment, all these things appear fortuitous. How will the Christian feel? Though he will consider that every circumstance which occurred in that person’s death was indeed in its nature fortuitous, he will have no doubt that the Providence of God overruled it and guided fortune to his own end. The same thing holds in the case of future contingencies. All future events being uncertain to us, seem in suspense as if ready to take either direction. Still, however, the impression remains seated in our hearts, that nothing will happen which the Lord has not provided. In this sense the term event is repeatedly used in Ecclesiastes, because, at the first glance, men do not penetrate to the primary cause which lies concealed. And yet, what is taught in Scripture of the secret providence of God was never so completely effaced from the human heart, as that some sparks did not always shine in the darkness. Thus the soothsayers of the Philistine, though they waver in uncertainty, attribute the adverse event partly to God and partly to chance. If the ark, say they, “Goes up by the way of his own coast to Bethshemish, then he has done us this great evil; but if not, then we shall know that it is not his hand that smote us, it was a chance that happened to us.” (1 Sam. 6:9). Foolishly, indeed, when divination fails them they flee to fortune. Still we see them constrained, so as not to venture to regard their disaster as fortuitous. But the mode in which God, by the curb of his Providence, turns events in whatever direction he pleases, will appear from a remarkable example. At the very same moment when David was discovered in the wilderness of Maon, the Philistines make an inroad into the country, and Saul is forced to depart (1 Sam. 23:26, 27). If God, in order to provide for the safety of his servant, threw this obstacle in the way of Saul, we surely cannot say, that though the Philistine took up arms contrary to human expectation, they did it by chance. What seems to us contingence, faith will recognise as the secret impulse of God. The reason is not always equally apparent, but we ought undoubtedly to hold that all the changes which take place in the world are produced by the secret agency of the hand of God. At the same time, that which God has determined, though it must come to pass, is not, however, precisely, or in its own nature, necessary. We have a familiar example in the case of our Saviour’s bones. As he assumed a body similar to ours, no sane man will deny that his bones were capable of being broken and yet it was impossible that they should be broken (John 19:33, 36). Hence, again, we see that there was good ground for the distinction which the Schoolmen made between necessity, secundum quid, and necessity absolute, also between the necessity of consequent and of consequence. God made the bones of his Son frangible, though he exempted them from actual fracture; and thus, in reference to the necessity of his counsel, made that impossible which might have naturally taken place.

John Calvin, Institutes of the Christian Religion, Book One, Chapter 16