This is from one of the NZ Business websites, and describes the situation that the Reserve Bank finds itself in: inflation starting, low interest rates propping up the economy, and pressure from the government to keep inflation down.

Businesses don’t want the Reserve Bank (RBNZ) to remove the punchbowl that is loose monetary policy.
But economists know the central bank will need to start thinking about when and how to wind the party down.
Since the onset of COVID-19, the RBNZ has sought to boost inflation and employment by lowering the Official Cash Rate (OCR) to 0.25%, buying $53 billion of mostly New Zealand Government Bonds, and lending retail banks $3 billion via its Funding for Lending Programme (FLP).
It will continue to buy government bonds and make cheap funding available to banks until June next year.
But with inflationary pressures building and the labour market proving tighter than expected, all eyes are on how the RBNZ will use its quarterly Monetary Policy Statement due out on Wednesday to signal an eventual tightening of conditions/raising of interest rates.
“The big test for the RBNZ is, how does it acknowledge the evolution we are witnessing without scaring markets?” BNZ head of research Stephen Toplis said.
“We completely understand why the RBNZ would not want rates to rise yet, nor the NZ dollar for that matter.
“But, at the same time, the Bank’s credibility would be threatened if it didn’t acknowledge price pressures have risen. Somehow it needs to find a way to prevent a market over-reaction while still signalling that the possibility of tighter conditions has increased.
“We will watch this tightrope walking with interest.” 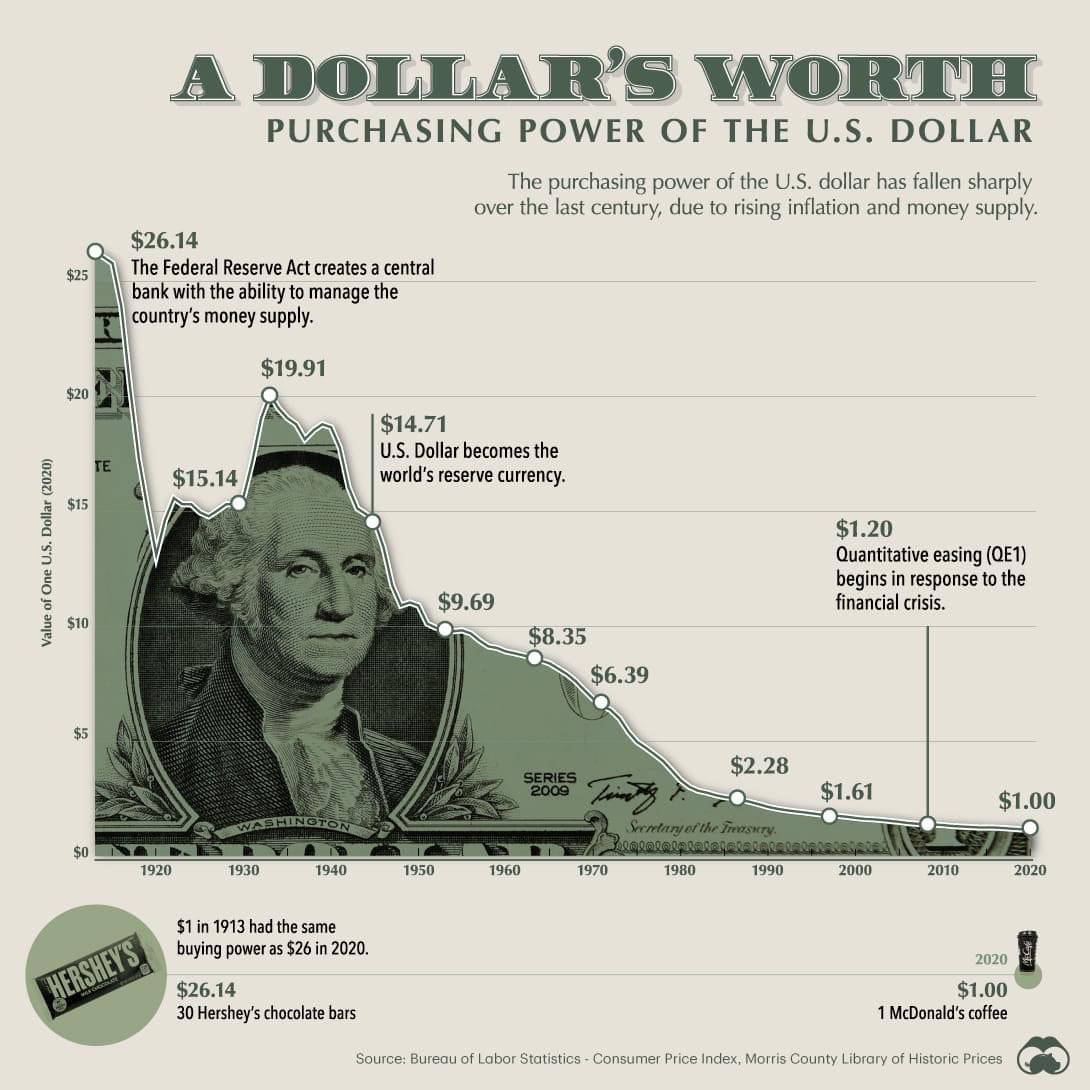 I keep on saying it is not the value of the dollar — the Kiwi dollar is creeping over 70 cents against the american buck, and the media will tell you that is good, but what it can buy. Aesop here, commenting on that graph.

Yesterday’s graphic, useful as it was to open the discussion, is lying even worse still. No, really. Because the financial idjit that made the graphic totally forgot that while 1 dollar buys 1 Hershey bar now, in 1913, 26.14 would have bought 1,307 Hershey bars. Not 30, as described in the graphic. The bars were 2¢ apiece back then. Whoops. Double bonus: The price of a cup of coffee in 1913? Also 2¢. So, empirically, you could have also bought 1,307 cups of coffee with your 26.14. Or 50 of either with a 1913 dollar. Or 25 of each.
IOW, in real commodity-based pricing, your dollar is worth exactly 50 times less now than in 1913. That would be…2¢. Color me shocked. Gold, chocolate, coffee: all confirm the data. BTW, another data point: average wages in manufacturing in 1914 were 22¢/hr, or about 11/wk. That would be 11/hr or 2200/wk now, based on purchasing power. After taxes. If you’re not clearing that now after taxes, IOW making the price of between 1/2 and 1 ounce of gold/week, you’ve lost ground over your grandfather and great-grandfather. The average weekly wages, per the .Gov , are around 900/week or so in manufacturing. Pre-tax. So it’s not your imagination that you’re losing ground, no matter what you do. You are. Figure that 900/wk is taxed at 20%, bringing it down to 700ish, versus 1100 that should be earned with dollar-parity. Your real wages, IOW, have slipped nearly 40% because of just inflation in the last century. You’re making less actual money, and everything is costing more inflated dollars to buy. And it doesn’t last as well.
….
When a non-gold-backed “dollar” is now worth less than 2¢, you’ve about reached the maximal ability of that Ponzi scheme, and the whistle is about to be blown, with gravity kicking in rapidly at that point. FTR, 40% of all the US dollars that have ever existed have been created – mainly digitally – in the last few years. I say yet again,
BRACE FOR IMPACT.
Because the first time the US economy hiccups, the whole house of cards comes all the way down. Look what one sector eating it did to us in 1999 or 2008. Now imagine that with everything, simultaneously.
A Vegas casino is required to have a dollar in cash in the vault for every dollar of chips in play. The USGov has no such requirement. So imagine a casino where they just keep paying you out with chips, and then everyone tries to redeem them. But the till is empty. Hilarity ensues. People get trampled. People get shot in the face. Expect both, on a societal scale.
Graphs like the above is what happens when they don’t even teach history to people who make such graphs.
Mafz Iz Hard. History + Mafz is apparently Chinese Calculus to some people.

One of my sons watchs and raads economic blogs and videos for fun. Yes, the family is geeky. And he said that he expects 40% inflation over the next few years. We are seeing the start of this as the renovation costs blow out — not the wages, but the materials — gib (Sheet rock for the Americans), timber. Electronics are becoming cheaper. Food is more expensive. And a coffee here is no longer four dollars, but five.

Here is one for you. I found some of my Dad’s tax returns from the late 60’s and early 70’s. His 1969 return showed that he made 13,500 income that year.
Depending which online inflation calculator you use, in 2021 that amount is now about 98k to 102k. But hey, think of all the dumbass MBA’s who think this fine and the academic economist who always piss on those Misesians and Austrians regarding money.
I would not go back to 1969 necessarily. I do like LCD TV’s, computers, better cars for the most part, and better stuff in some ways. What is left of the free market has provided us with fresh Subway sandwiches and other goods and services not thought of in 1969. But I do wish the damn elites just for once would do something good for us peons.

And Aesop commented right back.

My dad’s return was similar.
Another difference between then and now is that he was able, on that amount of income, to pay off the note on the house he bought, in L.A., for $25K in the late 1940s.
That wouldn’t even get me the down payment on a condo in the same neighborhood today, and it’s strictly a working class, one or two steps above ghetto neighborhood, not the hoidy-toidy shi-shi bougie part of town.
13,900 is less than 7 bucks an hour. That’s below poverty, now. Then, it was six times minimum wage.
With twice the education he had, at the fat-money end of my career, I don’t make 6X minimum wage now.
Yet again, our dollars are worthless.

Inflation is nasty. It toom 25% interest on mortgage payments, divesting generations of state assets, and breaking the unions to get us out of that cycle last time. Like flares, we should have left that in the 1970s.

Do not get into debt, because if we then crunch and deflate, you will need those dollars. Do get things sorted as much as you can now. You can’t eat computers. But you can grow a garden on land. Set your priorities accordingly — noting that you can now, post COVID, do a lot of things by distance which means you don’t have to be in LA (or Auckland) to make a living, and you don’t need to pay hyperinflated house prices to live.