The current assumptions of the people running our Western nation are not Christian. Instead, they function as materialist athiests, and fairly vile, woke ones at that. They do not see an accounting, and they don’t see the pattern that they are falling into. They preach a utopia, and deliver the opposite.

But there is a God who created, who sustains the world, and whose power we cannot comprehend. To him we will have to give account, at the end of this life. And during this life he corrects us, using nature.

It is not global warming that brings earthquakes and drought and famine and plagues: it is our rejection of the Almighty. If God did not spare Egypt he won’t spare us.

37 “At this also my heart trembles,
And leaps from its place.
2 Listen closely to the thunder of His voice,
And the rumbling that goes out from His mouth.
3 Under the whole heaven He lets it loose,
And His lightning travels to the ends of the earth.
4 After it, a voice roars;
He thunders with His majestic voice,
And He does not restrain the lightning when His voice is heard.
5 God thunders wondrously with His voice,
Doing great things which we do not comprehend.
6 For to the snow He says, ‘Fall on the earth,’
And to the downpour and the rain, ‘Be strong.’
7 He seals the hand of every person,
So that all people may know His work.
8 Then the animal goes into its lair
And remains in its den.
9 From the south comes the storm,
And from the north wind the cold.
10 From the breath of God ice is made,
And the expanse of the waters is frozen.
11 He also loads the clouds with moisture;
He disperses the cloud of His lightning.
12 It changes direction, turning around by His guidance,
That it may do whatever He commands it
On the face of the inhabited earth.
13 Whether for correction, or for His earth,
Or for goodness, He causes it to happen. 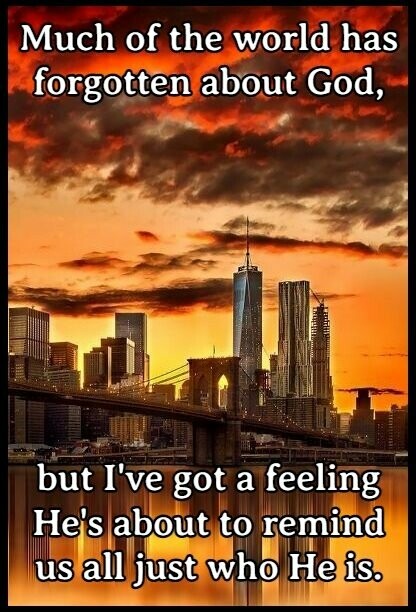 So in this time, we need to consider that we don’t live just for this time, but for eternity. We will have times of difficullty in our lives. The economic cycles happen. Not every year is good for every farm. In NZ we cannot run the debt level that other countries can because we have earthquakes, floods, drought, bushfires and Tsunamis at a regular, almost predictable rate — and for these things the Government backed Earthquake commission acts as a final insurer.

That is normal. This life has trials.

But we will leave this life behind.

50 Now I say this, brothers and sisters, that flesh and blood cannot inherit the kingdom of God; nor does the perishable inherit the imperishable. 51 Behold, I am telling you a mystery; we will not all sleep, but we will all be changed, 52 in a moment, in the twinkling of an eye, at the last trumpet; for the trumpet will sound, and the dead will be raised imperishable, and we will be changed. 53 For this perishable must put on the imperishable, and this mortal must put on immortality. 54 But when this perishable puts on the imperishable, and this mortal puts on immortality, then will come about the saying that is written: “Death has been swallowed up in victory. 55 Where, O Death, is your victory? Where, O Death, is your sting?” 56 The sting of death is sin, and the power of sin is the Law; 57 but thanks be to God, who gives us the victory through our Lord Jesus Christ.

We need to live now in light of eternity, but we need to also live now. We were not put where we are, in this time, without a purpose. We have times when we can influence: when we can do good, when we can glorify God.

And that we should do.

We will also be at times tempted to take the easy compromise, lose our integrity, and remain welded to the flesh as if that is all there is. If we do that, then there is a second death that awaits us.

It is far better to choose to be with Christ, to know God, and to enjoy him forever.