The ANZ business survey notes that 80% of firms are expecting their costs to go up ant 58% are planning to raise costs. In NZ. This may provide context to the indication of a pay freeze, and increased loan to deposit requirements for mortgatges that hav ebeen signalled.

ANZ chief economist Sharon Zollner said the strains in the economy are starting to show, as the economy tries to grow faster than it physically can, given shortages of both goods and labour.
“The degree of reported disruption caused by inward freight issues jumped for both construction and services, while for outward freight, reported disruption jumped economy-wide.
“Temporary it may be; immaterial it is not,” she said.
“Any ECON 101 student or business person can tell you that strong demand and hampered supply is a sure-fire recipe for inflation.
“The Reserve Bank can ignore it only as long as inflation expectations remain well-anchored. So far so good; but it’s a lagging, not leading, indicator,” she said.

Zero Hedge had the story this morning that ought to send chills up all of our spines. The setting is that the Bank of America has earnings calls with many businesses they work with (as you’d expect), and they note the number of mentions of “concerns about inflation” they hear mentioned. In their first calls in the previous two weeks, the number of mentions of concerns was up 400% year-over-year (YoY). That was more than triple the YoY per company so far, the and the biggest jump since BofA started keeping records in 2004. This week they needed an even bigger chart. The YoY increase in mentions of “concerns about inflation” reached 800% YoY shattering the week-old record. 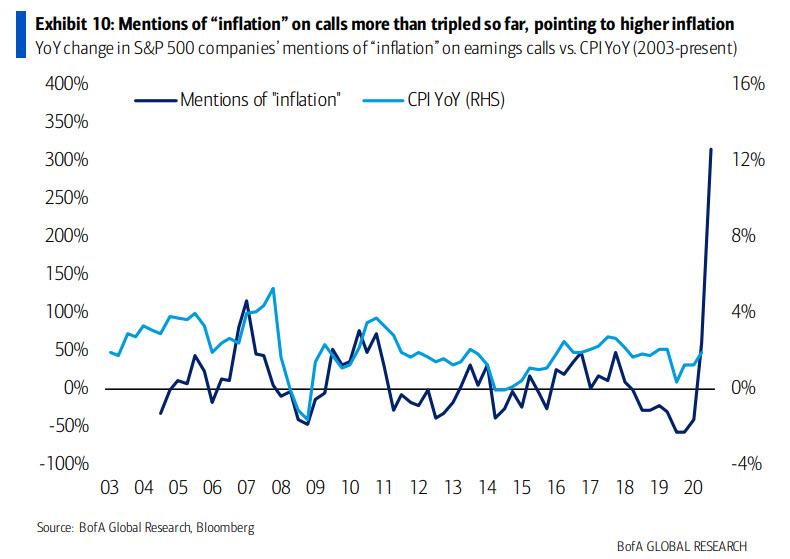 The lads in Reddit note that inflation is hitting a lot of commodities. The reported inflation rate is orthogonal to the commodity cost increases. 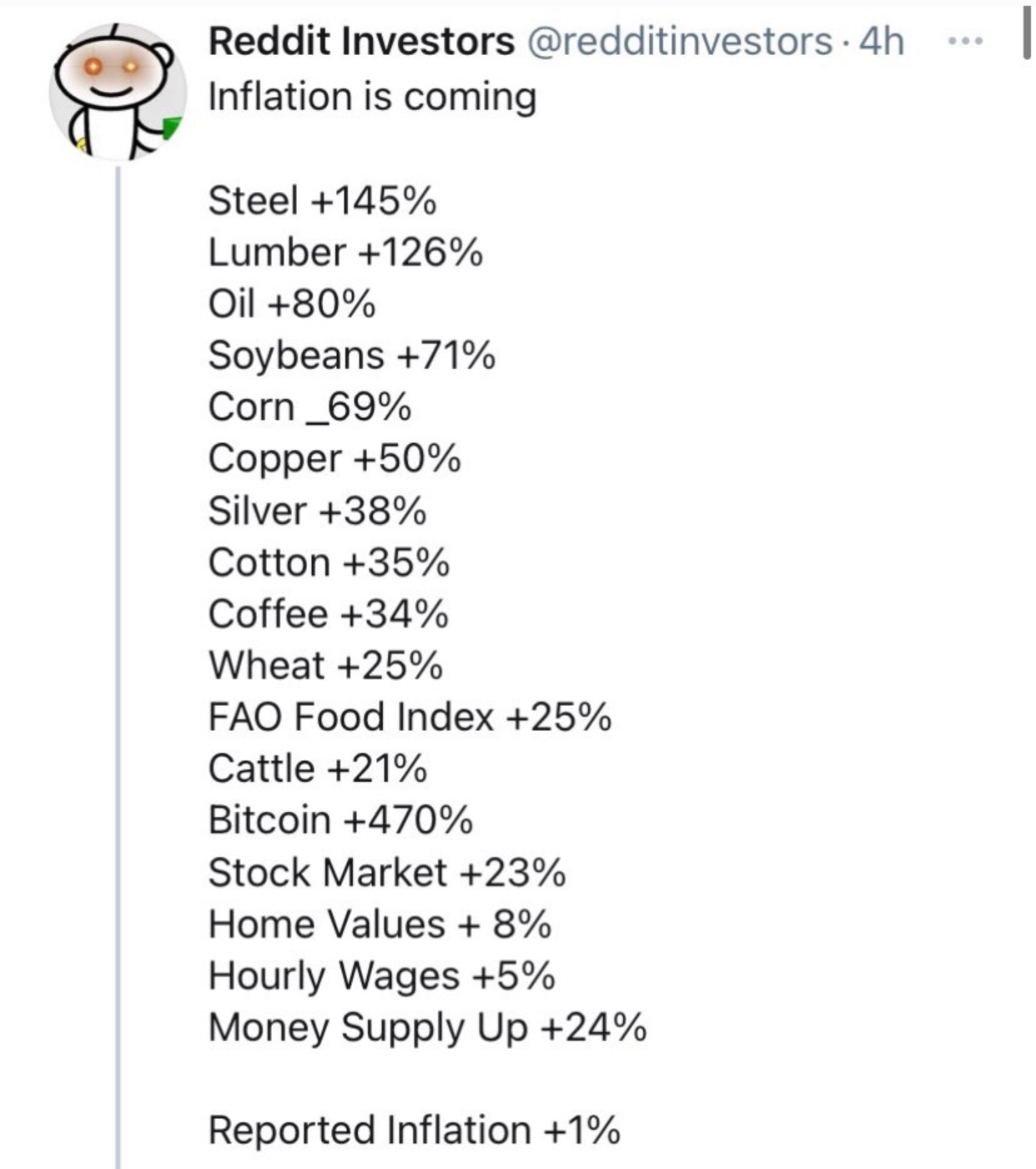 Simon Black is another person it is good to follow, and he notes that quantattive easing together with decreased capacity will increase prices. In NZ, we simply ignore the regulations around social distancing, but the businesses still have to have the codes and santizer out, though only the Karens use them.

Inflation is clearly a concern of the largest companies in the world. Investors are worried. Consumers can see it.
And in a rare moment of truth yesterday morning, a politician almost admitted that she was concerned about inflation too.
This is not some wild conspiracy. Inflation is real. It’s happening. Let’s look at three key drivers:
1) Capacity Constraints
Last year the entire world shut down. Businesses and factories everywhere closed, and plenty of companies went out of business.
Many companies who survived took radical steps to conserve cash– laying off workers, liquidating inventory, and selling equipment.
One critical consequence was that the amount of capacity in the system was greatly reduced.
Here’s an example: I’ve been in Cancun for several weeks, and as you know, this place is a major tourist destination.
Last year when tourism dried up, plenty of companies went out of business. Rental car companies, for example, had practically zero customers. Many went bankrupt. Others survived by selling off most of their vehicles, believing that it would be years before the tourists returned.
But a year later, the tourists are back.
Problem is, there are now very few cars to rent in Cancun, because rental agencies either went bankrupt or liquidated their inventories.
As a result, car rental prices in Cancun have surged; supply is scarce, yet demand is back to normal.
We’re seeing similar effects across the economy. Capacity is limited because of the extreme measures that businesses took last year. And they can’t simply flip a switch and bring capacity back to normal. It takes time.
They’ll have to invest in inventory, hire more staff, etc. Eventually, these supply/demand imbalances will stabilize. But for the foreseeable future, it’s driving prices higher.
This is the type of inflation that politicians and central bankers have been calling “transitory”. In other words, it’s temporary pressure that should subside in the future.
2) COVID lunacy
Hardly anyone talks about this… but just think about all the idiotic rules that people have to follow now.
If you own a retail store in a shopping mall, for example, you have to pay employees to stand at the door ready to hose down every customer who walks inside with hand sanitizer.
And imagine how much money businesses are spending now on PPE… masks, gloves, hand sanitizer, etc. Or companies (airlines, hotels, etc) that now employ legions of workers to chemically scrub every nook and cranny of the premises.
All of this costs money, and the extra costs eventually get passed on to consumers. Most likely, these measures are not going away… which means that COVID is extremely inflationary.
3) Trillions in money printing
This is the big one. The US federal government is hoping to spend a whopping 11 TRILLION this year, between the regular budget, COVID stimulus already passed, and all the new legislation they’re proposing.
And it’s only May.
Obviously Uncle Sam doesn’t have the money. So they have to borrow it.
Their chief remaining lender these days is the Federal Reserve, which first has to ‘print’ money before loaning it to the government.
(The actual process is more modern and complex, but that’s basically what happens in a nutshell.)
The more money the government spends, the more the Fed prints (roughly $4 trillion last year). And as this freshly created money makes its way through the economy, it typically ends up in financial markets, driving asset prices higher.
It’s not a coincidence that the Fed has created record sums of money, and the stock market is simultaneously at a record high. Ditto for real estate, cryptocurrencies, collectibles, etc.
Many commodities are also at record highs. Lumber prices have never been higher. Corn is near its all-time high. Oil prices surged from MINUS 40/barrel last year to 70 today– a difference of 110.
Higher commodity prices eventually lead to higher consumer prices.
High lumber prices, for example, mean that housing costs increase. Higher corn prices mean higher food prices. Higher fuel prices mean higher transport costs, which increases the price of almost everything.
So as long as the Federal Reserve is printing money and holding rates down to historic lows, these prices will likely keep rising.
Given the US government’s insatiable appetite to borrow money from the Fed, this inflation pressure is NOT going away.
And after what we saw yesterday, it’s clear that the government’s approach will be to ignore or dismiss inflation risks.

We are pushing ahead on finishing the renovation of Casa Kea. The prices are going up, so we have prepaid for as much as possible. Our aim is to stay here for a very, very long time. If the crowds come, we can go through the back fence into the bush and get lost… and yes, there is a gate there.

It’s getting spicy. The government is going full micromanagement. I last saw this when I was a teenager, under Robert Muldoon. We almost went bankrupt that time. This time could be worse.

Stay away from crowds, and batten down the hatches.

As the kids might say these days Amy, #metoo. (Hope I got that right, I don’t want to sound like an out-of-touch old guy.) I poured a slab for a new pergola before the virus. Didn’t get around to building the pergola last summer but thought this summer might be the perfect time. Then discovered the tripled price of lumber. Now I’m just watching prices. I’ll get it eventually and my back yard will be that much nicer. Eventually.

@Heresolong My mom gave up her fence project due to price/availability of lumber (she couldn’t get anything but green wood). My understanding is the lumbermills were closed for a year due to COVID (likewise steel mills). Pretty much all the commodity prices are skyrocketing (I work for a manufacturer and we are definitely seeing increases on all the things).

I expect lumber prices to come down as people go back to work, leaving less time for building all those backyard projects; and as Canada reopens (I can dream, can’t I?) and lumber production starts to increase. My understanding is that the unreliable Canadian supply is a part of the reason for the price increases. We are also seeing a building boom which I assume is being driven by a year of prohibition on anyone doing anything productive. There is going to be some catch up.