Around the monitored traps.

And I am going to break Godwin’s Law. Sometimes you have to. LInk is to Zero Hedge.

The FBI issued an ominous tweet on Sunday which encourages "family members and peers" to "learn how to spot suspicious behaviors and report them to the FBI" in the name of national security.
…
The FBI’s tweet goes hand-in-hand with a campaign dating back to at least September of 2020, when FBI Director Chris Wray told Congress that the greatest threat facing America comes from domestic extremists (and not the thousands of ‘protesters’ who spent much of last year looting, murdering and setting fires across American cities), which quickly morphed into ‘angry white men’ who disagree with Democratic policies.
Combine that with President Biden framing the Capitol rioters as ‘white supremacists,’ which he said is ‘he most lethal terrorist threat to our homeland today’, and Gen. Mark Milley, the highest-ranking military officer in the U.S. as Chairman of the Joint Chiefs of Staff, testifying last month that he wants to understand where ‘white rage’ comes from, and it couldn’t be more clear that this is a coordinated propaganda campaign to demonize an entire race to solve a problem that largely doesn’t exist, while actual domestic terrorism is excused as ‘mostly peaceful’ protests. 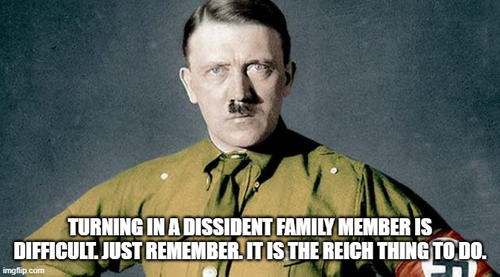 Nuremberg Trials II is coming for the medical elite who have gagged the profession.

Hello, SS, this girl Anne Frank has been questioning the efficacy of the vaxx. Come arrest my duaghter and I’ll publish her diary and get rich.