On Sunday I can go a bit longer in the introduction. When Christ fed 5000 people with five loaves of bread he did ten times more extension of the food than Elijah did when a man bought to the prophet the first fruits of his harvest.

From the actions of the man who bought the food to Elisha one can see this: we should indeed give to the work of God. But if the temple is corrupted, do not give to it. If it is impossible to give to Jerusalem, give elsewhere. Give to where the spirit of God is, and the work of God is happening.

As a general rule, this is not within the converged churches of any branch of Christianity. There are plenty of megachurches that are converged and more mainline churches. Do not enter the door of such: they are synagogues of Satan.

There are faithful churches and leaders in all parts of the church. Support them.

O God,
whose never-failing providence ordereth all things
both in heaven and earth;
We humbly beseech thee to put away from us
all hurtful things,
and to give us those things which be profitable for us;
through Jesus Christ our Lord.

Wokeness has invaded Hollywood, which used to be a refreshingly amoral place where people cash-signaled instead of virtue-signaled. Posing is now currency. That’s bad, because when everybody was focused on money, at least we could buy them off. You could make something conservative because people would pay for it. But you can’t buy off people who are only interested in getting PC props from their fellow drones.
As a result, today’s films and shows are dreary exercises in boring conformity that push a message of submission to the dominant paradigm. It’s all CRT strawmen villains and a diverse spectrum of tiresome protagonists who look different but are entirely the same.

There is harm in supporting them. But there is benefit in being near Christ though your job may be taken from you.

Christ has greater powers of provision than this world.

14 For this reason I bend my knees before the Father, 15 from whom every family in heaven and on earth derives its name, 16 that He would grant you, according to the riches of His glory, to be strengthened with power through His Spirit in the inner self, 17 so that Christ may dwell in your hearts through faith; and that you, being rooted and grounded in love, 18 may be able to comprehend with all the saints what is the width and length and height and depth, 19 and to know the love of Christ which surpasses knowledge, that you may be filled to all the fullness of God.
20 Now to Him who is able to do far more abundantly beyond all that we ask or think, according to the power that works within us, 21 to Him be the glory in the church and in Christ Jesus to all generations forever and ever. Amen.

6 After these things Jesus went away to the other side of the Sea of Galilee (or Tiberias). 2 A large crowd was following Him, because they were watching the signs which He was performing on those who were sick. 3 But Jesus went up on the mountain, and there He sat with His disciples. 4 Now the Passover, the feast of the Jews, was near. 5 So Jesus, after raising His eyes and seeing that a large crowd was coming to Him, said to Philip, “Where are we to buy bread so that these people may eat?” 6 But He was saying this only to test him, for He Himself knew what He intended to do. 7 Philip answered Him, “Two hundred denarii worth of bread is not enough for them, for each to receive just a little!” 8 One of His disciples, Andrew, Simon Peter’s brother, said to Him, 9 “There is a boy here who has five barley loaves and two fish; but what are these for so many people?” 10 Jesus said, “Have the people recline to eat.” Now there was plenty of grass in the place. So the men reclined, about five thousand in number. 11 Jesus then took the loaves, and after giving thanks He distributed them to those who were reclining; likewise also of the fish, as much as they wanted. 12 And when they had eaten their fill, He said to His disciples, “Gather up the leftover pieces so that nothing will be lost.” 13 So they gathered them up, and filled twelve baskets with pieces from the five barley loaves which were left over by those who had eaten. 14 Therefore when the people saw the sign which He had performed, they said, “This is truly the Prophet who is to come into the world.”

15 So Jesus, aware that they intended to come and take Him by force to make Him king, withdrew again to the mountain by Himself, alone.
16 Now when evening came, His disciples went down to the sea, 17 and after getting into a boat, they started to cross the sea to Capernaum. It had already become dark, and Jesus had not yet come to them. 18 In addition, the sea began getting rough, because a strong wind was blowing. 19 Then, when they had rowed about twenty-five or thirty stadia, they saw Jesus walking on the sea and coming near the boat; and they were frightened. 20 But He said to them, “It is I; do not be afraid.” 21 So they were willing to take Him into the boat, and immediately the boat was at the land to which they were going. 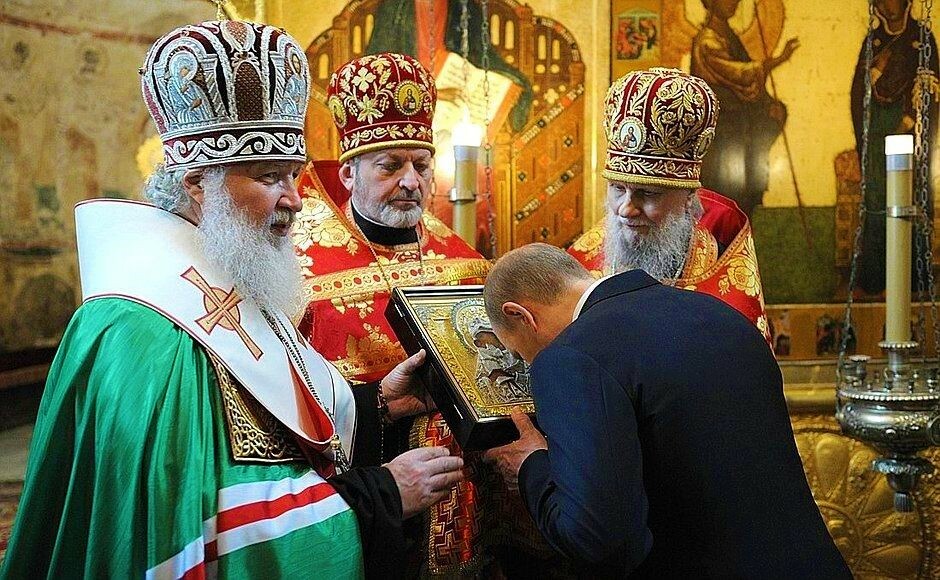 If the link above works, it should be the President of Russia, Mr Putin, lighting a candle in an Orthodox Church.and then respecting an ikon. We can consider if this fakery or true faith: we will not know. We do know that Putin sees this as more than expedient, and the Russian Press respect his worship. The Aussie press do not respect those Christians who become PM, from Tony Abbot, a Catholic, to Scott Morrision, a Pentecostal.

This is worth considering. In a rightly organised nation, the princes of the nation worship God truly, and listen to the Bishops and Elders on issues of morals and faith.

For the kingdom of God was not made for this world, but for something more eternal. When Jesus fed 5000 he would have been seen by the crowd as Elijah reborn, or the Messiah. They wanted him to be a King. Right now.

So Jesus sent his disciples rowing into a storm, while he went into the wilderness.

In the west, we don’t have righteous rulers. The apostate generations have instead tyrants, elected in managed elections, which is what we deserve for our sins.

We need to reform our church: we need to prune the woke, apostate, and overly proud from our elders and governance.

And then live as Christ wants us to. Then watch the nations tremble, as the spirit of God moves with power.

May revival indeed come, beginning with me.