Around the trucking traps, pm edition

The Kiwi grumpiness continues. People are noticing what is not reporteda; the government talks cases. Not hospital admissions. Not deaths. For what it is worth, there are 15 people in hospital and no deaths. So far, we have done well. 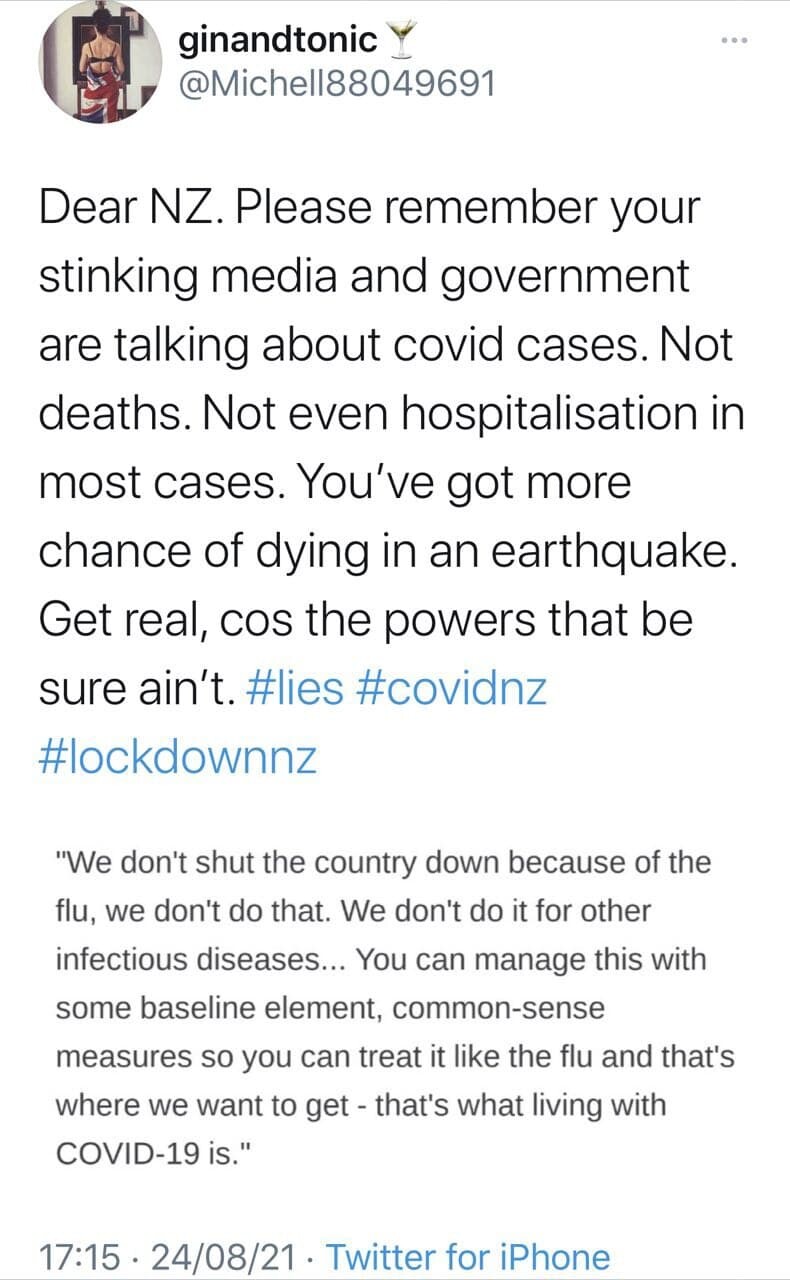 The current plan in NZ is to identify the virus, contact trace, and stamp it out. This is a policy unlike most of the rest of the world. It requires a closed border. If you open the borders — and much of our economy requires open borders –then we are going to find that elimination won’t work. It does not mater if the travellers are tourists, businessmen or Afghan refougees.

"When we open the border, things are going to get tough," Prof Skegg told the committee.
"I keep saying to my friends, this is the golden year. We’ve had a wonderful time the last six months. We’re almost the only country on Earth just living a normal life.
"I know some people have been really impacted by the border closures, obviously families that can’t be reunited, people who work in tourism – I know some of these people and they’re suffering.
"But most New Zealanders have been able to enjoy normal, social life, our economy is doing well, we’ve spent less time in lockdown than many other countries.
"But I think things will get more difficult when we start reopening the borders… we’re going to have outbreaks of COVID-19 and they may be difficult to control."

Prof Skegg expects the lockdown to last weeks and the COVID issue to be around for years. It’s worth nothing that there are three cases in the South Island, all travellers, all in quarantine.

And an announcement on change of level is expected tomorrow for all areas but Auckland. The PM is continuing with an elimination strategy.

Around the internet there is a series of videos and warnings saying that in Australia the trucks are going to stop on August 31, including a blockade, so all capital cities in OZ will not get goods. They are warning people to stock up in preparation. If you are on OZ, heed this: otherwise we can watch and see what happens.

The message is this: Back off and return our country to us, or we go on strike. This message is a potent reminder to the entitled, white-collars sitting in their ivory towers, with their pandemic pay-rises and Big Pharma mates, that they are not in charge.
In spite of stay-at-home orders, last weekend tens of thousands of Australians marched to protest the government lockdowns. These are not "anti-vaxxers" or "conspiracy theorists”, they are people who recognise we are in the midst of a takeover, and want to take back control of the wheel, before we as a nation are driven into oblivion.
At the Queensland-New South Wales border, thousands protested against the Queensland premier, Annastacia Palaszczuk, and her signalling she will mandate vaccines before permitting people to cross the border. Since the border in Tweed Heads-Coolangatta runs down the centre of the street, crossing the road from one shop to another would require a shot before you shop.
We Australians have been asleep at the wheel too long, and this has allowed the governments and their corporate pals to steer us off-course, where government interference occurs in all aspects of our lives. Could the rise of the blue-collar worker, protesting through strike action, finally be the one thing that will bring them to the negotiating table?

The commentary is getting fairly terse as well.

To heck with paying the bills, this is now about survival. So what if your credit score takes a hit. Big deal. In three or four months, it will be good as gold again.
They’ll throw you in jail? Big deal. You’re already in jail – in your own home — because of these government punks.
You’ll get thrown out of school or fail college for a semester? Big deal. With the trash education most of the schools provide, you’ll be doing yourself a real favor not attending their filthy indoctrination. Then, too, once they realize they’re killing their own customer base and that the school cannot survive without "x" number of paying students, they’ll shut up real quick!
The goal of these Australian groups is simple. One organizer with whom we spoke said: "No more masks, no more lockdowns, no more forced vaccinations no vaccine passports or restrictions on normal people, or else the government will be imploded by its own people."
He went on to say "No talk. No negotiation. Government must comply or be imploded."
Australians have NINE (9) (8) (7) (6) Days to prepare.

Having had a look at the mainstream media sites, this looks like it is not goint to go ahead. The general rule of stay away from crowds applies. We alrsay have some shortages of goods here in some supermarkets. The supply chain is stretched, and the government is advising people not to mail order things unless you can’t get to the supermarket so it is available to thos ewho need it.

This does not look good. Let’s say that when I was getting consumables today I doubled my order.

Interesting article on virus immunity and how it works in the long run.