If you see only the material circumstances and read only that which is the received narrative of those the world calls great and good (who are generally members of the high materialist church) you are missing where the battle for this age is fought. It is not material. It is not ideological. It is spiritual.

Either there is revival and our nations choose again to serve the LORD our God or there is apostasy, and we will be one with the Amorites that God drove out of Canaan so that Israel will have a place they can stand. I have a sneaking suspicion that the Amorites will accuse this generation, for we had the truth and rejected it for lies that we knew were not true.

Note the dates on these tweets, and tell me that we are not being punished, as nations of the West, for our apostasy and hubris.

I have to thank Nikolai for linking to these tweets, which makes the point quite nicely. If you mock God, God will let you become stupid and a laughing stock, a warning to other nations. 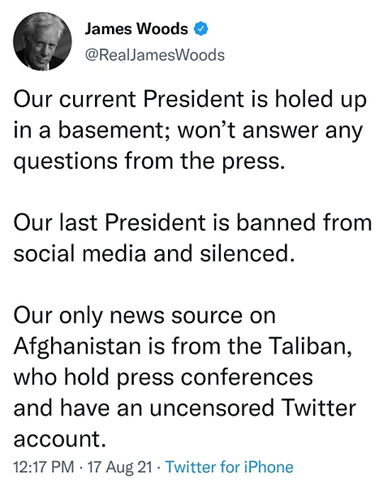 I pray for revival because I am of my nation, and my family is here. There is no where to run. And I pray that out of this travail — where people are being arrested for peaceful protest and warned not to do usual activities— there will be a repentance of the people, who will not seek succour in material things, and turn from their ideologies to God.

Almighty and everlasting God,
who art always more ready to hear than we to pray,
and art wont to give more than either we desire, or deserve;
Pour down upon us the abundance of thy mercy;
forgiving us those things whereof our conscience is afraid,
and giving us those good things
which we are not worthy to ask,
but through the merits and mediation
of Jesus Christ, thy Son, our Lord.

16 Then the people answered, “Far be it from us that we should forsake the Lord to serve other gods, 17 for it is the Lord our God who brought us and our fathers up from the land of Egypt, out of the house of slavery, and who did those great signs in our sight and preserved us in all the way that we went, and among all the peoples through whom we passed. 18 And the Lord drove out before us all the peoples, the Amorites who lived in the land. Therefore we also will serve the Lord, for he is our God.”

10 Finally, be strong in the Lord and in the strength of his might. 11 Put on the whole armour of God, that you may be able to stand against the schemes of the devil. 12 For we do not wrestle against flesh and blood, but against the rulers, against the authorities, against the cosmic powers over this present darkness, against the spiritual forces of evil in the heavenly places. 13 Therefore take up the whole armour of God, that you may be able to withstand in the evil day, and having done all, to stand firm. 14 Stand therefore, having fastened on the belt of truth, and having put on the breastplate of righteousness, 15 and, as shoes for your feet, having put on the readiness given by the gospel of peace. 16 In all circumstances take up the shield of faith, with which you can extinguish all the flaming darts of the evil one; 17 and take the helmet of salvation, and the sword of the Spirit, which is the word of God, 18 praying at all times in the Spirit, with all prayer and supplication. To that end keep alert with all perseverance, making supplication for all the saints, 19 and also for me, that words may be given to me in opening my mouth boldly to proclaim the mystery of the gospel, 20 for which I am an ambassador in chains, that I may declare it boldly, as I ought to speak.

56 Whoever feeds on my flesh and drinks my blood abides in me, and I in him. 57 As the living Father sent me, and I live because of the Father, so whoever feeds on me, he also will live because of me. 58 This is the bread that came down from heaven, not like the bread the fathers ate and died. Whoever feeds on this bread will live for ever.” 59 Jesus said these things in the synagogue, as he taught at Capernaum.
60 When many of his disciples heard it, they said, “This is a hard saying; who can listen to it?” 61 But Jesus, knowing in himself that his disciples were grumbling about this, said to them, “Do you take offence at this? 62 Then what if you were to see the Son of Man ascending to where he was before? 63 It is the Spirit who gives life; the flesh is no help at all. The words that I have spoken to you are spirit and life. 64 But there are some of you who do not believe.” (For Jesus knew from the beginning who those were who did not believe, and who it was who would betray him.) 65 And he said, “This is why I told you that no one can come to me unless it is granted him by the Father.”
66 After this many of his disciples turned back and no longer walked with him. 67 So Jesus said to the Twelve, “Do you want to go away as well?” 68 Simon Peter answered him, “Lord, to whom shall we go? You have the words of eternal life, 69 and we have believed, and have come to know, that you are the Holy One of God.”

There is much being written now about the failure of the managerial class. I’ve quoted a fair bit of it. But underlying this there is a rejection of God. It is as if the rulers have seen the word of God as nothing but a collection of hard sayings, If you rejected Christ early, you are quite proud of it, and then wonder why people hate you.

But if you see Christ as the Holy One of God, then you know that the world hates you: both Jews and Gentlies: both the religious and secular world.

Because the Battle is Spiritual. Spiritual status leads to religious doctrine (I’m allowing the Atheists a state here akin to the Buddhists as religious connoisseurs of despair) leads to culture: culture leads to politics, and politics leads to laws.

Abandon God, and within the lifetime of those children there will be active promotion of evil, and righteous behaviour will be outlawed.

I am one of those who saw the abandonment of God when I was young and now see the consequences. I worry for my children and grandchildren.

So let is put on all the equipment God has given us. Let us pray for his mercy for our nation. Let revival flow.

And may none of us ever say it was due to the virtue of our apostate nations. They have left God. I pray that my house does not.