Over the last 24 hours I have been reading some fairly scary stuff: compilations of visions and prophecies from people I respect. And the word seems to be that the time of mercy will end, and then our nations will he held to account.

Locally, world war T is being fought as the so called conservatives throw God under the bus to appease the rainbow. I am having a comment from Ruth Graham running through my head: if God does not punish the West then he owes Sodom and Gomorrah an apology.

This is a time when the organised church is being corrupted and tested, and we need to hold firm to the faith. Regardless of what the official stance of our government becomes.

Most such ‘Christians’ have already ceased to be real Christians, whether or not they have officially left their churches – and they have joined the side of global totalitarianism – advocating as life priorities… whatever they are told to advocate (birdemic, peck, antiracism, climate change, socialist economics… whatever).
Probably at least tens-of-millions of people who were (more-or-less) followers of Jesus in 2019 crossed to the other side in early 2020 – in what was surely the biggest (proportionately as well as numerically) apostasy since the early churches were organized.
And hardly anybody seems to have noticed! Yet destruction of the Christian churches was very likely the core goal of the birdemic fraud and the totalitarian coup which it excused.
My point here is that if you believed in 2019 that Christian churches (i.e. your favoured church) are essential to salvation – then you have already been tested, and quite likely have failed – and have de facto joined the side of Satan in the spiritual war.
But the process will continue.
What Christians absolutely need to do, is each to base his own faith upon what he personally regards as absolutely solid ground: ground solid-enough that he would metaphorically (if not literally) ‘go to the stake’ over its truth.
In other words – these times require each Christian to embark on a radical process of grounding his own faith on only those places where he is sure that he is secure.
Sure enough to suffer for it. 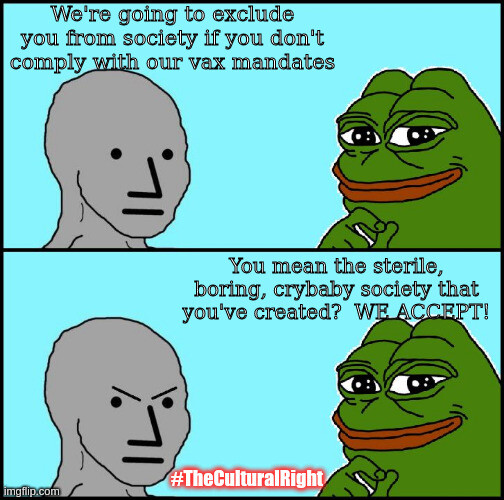 So what do we ground ourselves on? Not this world — when you are using NPC and Groyper memes to make your point you know this world is not it. When poverty is in the richest country… you know that their policies are not it.

You ground yourself, instead, on Christ.

Let thy merciful ears, O Lord,
be open to the prayers of thy humble servants;
and that they may obtain their petitions,
make them to ask such things as shall please thee;
through Jesus Christ our Lord.

25 Therefore, ridding yourselves of falsehood, speak truth each one of you with his neighbour, because we are parts of one another. 26 Be angry, and yet do not sin; do not let the sun go down on your anger, 27 and do not give the devil an opportunity. 28 The one who steals must no longer steal; but rather he must labour, producing with his own hands what is good, so that he will have something to share with the one who has need. 29 Let no unwholesome word come out of your mouth, but if there is any good word for edification according to the need of the moment, say that, so that it will give grace to those who hear. 30 Do not grieve the Holy Spirit of God, by whom you were sealed for the day of redemption. 31 All bitterness, wrath, anger, clamor, and slander must be removed from you, along with all malice. 32 Be kind to one another, compassionate, forgiving each other, just as God in Christ also has forgiven you.

5 Therefore be imitators of God, as beloved children; 2 and walk in love, just as Christ also loved you and gave Himself up for us, an offering and a sacrifice to God as a fragrant aroma.

41 So then the Jews were complaining about Him because He said, “I am the bread that came down out of heaven.” 42 And they were saying, “Is this not Jesus, the son of Joseph, whose father and mother we know? How does He now say, ‘I have come down out of heaven’?” 43 Jesus answered and said to them, “Stop complaining among yourselves. 44 No one can come to Me unless the Father who sent Me draws him; and I will raise him up on the last day. 45 It is written in the Prophets: ‘And they shall all be taught of God.’ Everyone who has heard and learned from the Father, comes to Me. 46 Not that anyone has seen the Father, except the One who is from God; He has seen the Father. 47 Truly, truly, I say to you, the one who believes has eternal life. 48 I am the bread of life. 49 Your fathers ate the manna in the wilderness, and they died. 50 This is the bread that comes down out of heaven, so that anyone may eat from it and not die. 51 I am the living bread that came down out of heaven; if anyone eats from this bread, he will live forever; and the bread which I will give for the life of the world also is My flesh.”

The current vector of attack is regulating us via social media. The cure for this is simple. Don’t be on social media. We are not to be slaves of the current narratives of lies.

Yes, that is the total narrative: Chinese people are all just slaves to the Chinese communist government.
Of course, the Americans who live in fear of having their lives destroyed by the media for making any comment disagreeing with the regime, in fear of being force-vaxxed by the government – they are all actualized individuals who live with total freedom in a free country. 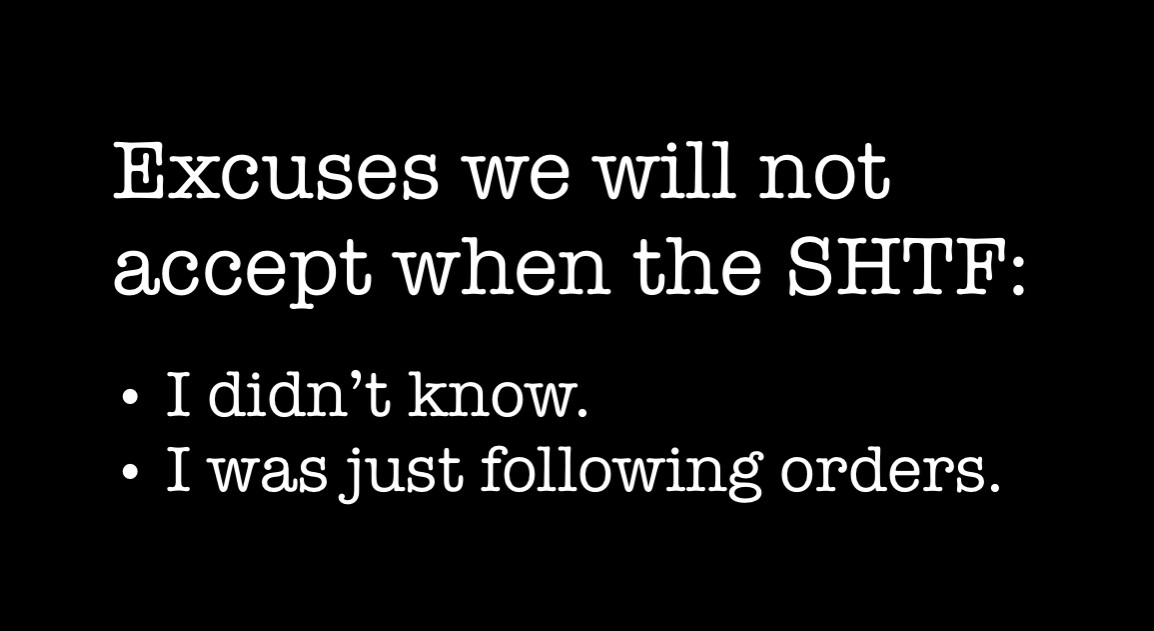 We need to support each other. If it glorifies God, use it. We need to mistrust those who are comfortable and salaried while the economy is imploding. And above all, those who see God as some form of divine ATM dispensing blessings.

The barbarian opinion of God is that He is a genie who man wishes upon for material comforts, usually money. Since the poor are in greater need of resources than the rich, the “intelligent” barbarian concludes that God is an invention for the impoverished to embrace their lot, not understanding that it benefits Satan to engineer a global system of comfort instead of poverty, for in poverty at least people are reminded of their abject needs and reach out to a higher power. In fact, Satan does all that he can to satisfy your worldly needs because once he does so, you will become deceived that there is no need of God. This is why the most vehement atheists are those whose bodies are in a state of comfort, good health, and easy working conditions.
The truth is that all souls are in need of salvation, whether poor and rich, and as Lord Jesus Christ taught, the rich will find it much more difficult to enter the Kingdom of Heaven because of their riches. Therefore poverty is a blessing given to those whom in riches would have forsaken God and been condemned.

God is more interested in this: that we seek him. Regardless of what the world says. His blessings are sure, but they are not counted as the world — or in Roosh’s terms, barbarians — count them.

This world is driven by fear: loss of status, loss of property. Too many people are mortgaging their life for baubles that will depreciate or be destroyed, for almost every consumer good now is engineered to break in 24 to 36 months.

We need to radically simplify. So we can support the work of God. Despite this being completely unfashionable.

And our foundation? It is not us. It is the words of Christ.

What Amy said. Portland is overrun, Seattle is terrible, and it’s moving outwards. Starting to see it in the small towns around the Pacific NW, especially since the courts have started ruling that you can’t kick people out of their “homes”, even if said home is a tent or trailer plopped down on public property.

Can attest that the blue-tent/tarp cities you see on the news are real, and not exaggerated. Do not know what kind of society thinks that it is okay to have a man waving a knife for months at strangers, with a particular fondness for yelling at women and children. Yes, he always had a knife. Visible, chef’s knife ~ 8″, not concealed. He liked streetcorners. Finally not on the streets, at least here. But hopefully not in a hotel. https://www.10news.com/news/california-spending-billions-to-house-homeless-in-hotels Hopefully being cared for properly. Unlikely. More likely in prison (70% mental illness rate in LA jails). -headdesk-