I am calling bullshit on this. The vaccine is converged with the current elite, who are so far removed to God that the denizens of Sodom and Gomorrah are lining up to accuse them. 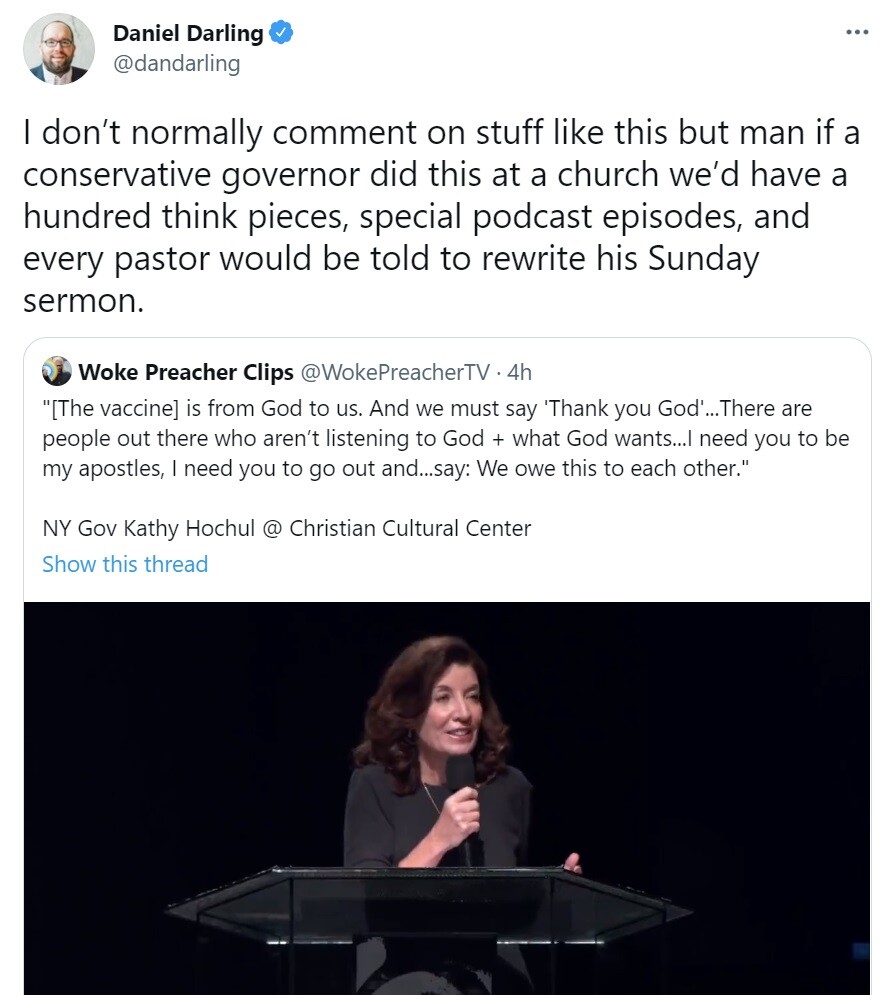 Kathy Hochul, the sitting New York governor who took office after Andrew Cuomo was ousted for sexual harassment charges with multiple women, recently preached a sermon at the Christian Cultural Center in New York stating that she wears her “I’m Vaccinated” necklace all the time because she’s smart. Conversely, she states, those who aren’t getting vaccinated aren’t listening to what God wants.

Of course, she’s right–her “god” does absolutely want everyone to be vaccinated. And she does listen, very well, to her god. That is, because, her god is the state. Her god is the government. And there is no higher authority for her than the government–particularly, the one she now runs. And her god issued a decree that everyone must be vaccinated–whether or not it bears weight against your conscience to do so.

“[The vaccine] is from God to us. And we must say ‘Thank you God’…There are people out there who aren’t listening to God + what God wants…I need you to be my apostles, I need you to go out and…say: We owe this to each other.”

There are a series of errors here.

Anathema 1: the civil magistrate is not the teaching elder

I’m quoting here from Chapter 20, Book four of the Institutes. Calvin is more subtle than many would credit him. He discusses the nature of government: that kingship leads to tyranny, and democracy to sedition, referring to Plato. But he is very clear that the civil magistrate defends the law of God. He does not make it. The place of the civil magistrate in any divine service is in the pews. The eldership is different.

This was an error of the renaissance Popes, who ruled much of Italy as feudal Lords. The church is a higher calling.

The duty of magistrates, its nature, as described by the word of God, and the things in which it consists, I will here indicate in passing. That it extends to both tables of the law, did Scripture not teach, we might learn from profane writers; for no man has discoursed of the duty of magistrates, the enacting of laws, and the common weal, without beginning with religion and divine worship. Thus all have confessed that no polity can be successfully established unless piety be its first care, and that those laws are absurd which disregard the rights of God, and consult only for men. Seeing then that among philosophers religion holds the first place, and that the same thing has always been observed with the universal consent of nations, Christian princes and magistrates may be ashamed of their heartlessness if they make it not their care. We have already shown that this office is specially assigned them by God, and indeed it is right that they exert themselves in asserting and defending the honour of him whose vicegerents they are, and by whose favour they rule. Hence in Scripture holy kings are especially praised for restoring the worship of God when corrupted or overthrown, or for taking care that religion flourished under them in purity and safety. On the other hand, the sacred history sets down anarchy among the vices, when it states that there was no king in Israel, and, therefore, every one did as he pleased (Judges 21:25). This rebukes the folly of those who would neglect the care of divine things, and devote themselves merely to the administration of justice among men; as if God had appointed rulers in his own name to decide earthly controversies, and omitted what was of far greater moment, his own pure worship as prescribed by his law. Such views are adopted by turbulent men, who, in their eagerness to make all kinds of innovations with impunity, would fain get rid of all the vindicators of violated piety. In regard to the second table of the law, Jeremiah addresses rulers, “Thus saith the Lord, Execute ye judgment and righteousness, and deliver the spoiled out of the hand of the oppressor: and do no wrong, do no violence to the stranger, the fatherless, nor the widow, neither shed innocent blood” (Jer. 22:3).

Anathema 2: the civil magistrate will not promote evil

I’m quoting our Orthodox brothers, because they have suffered more under the state than most in the last few centuries.

Christians traditionally have held that there must be some form of state government with real power to care for the common good. The state can never be absolute however, and it may even be evil, in which case it must be resisted by men who love truth.

There have been in history many alliances between Church and state in Orthodoxy. These alliances have not always been happy ones and not seldom have been damaging to the Church and have required resistance from the Church in the persons of the prophets and saints. Nevertheless, the Orthodox would insist that for the relative life of this world, there must be some form of government with equally relative powers to preserve good order. And the Orthodox should be ready to be loyal to any such government which does not assume what belongs properly to God.

The vaccine was made by man. Like all things men make, it is not perfect. It has side effects — currently suppressed by social media and by gagging regulations on health workers. The very need to praise the vaccine as effective while suppressing side effects is wrong. As is coercing the vaccine by holding a gun to people’s jobs.

Anathema 3: The civil magistrate must follow the laws of God and nature

Yes, I’m quoting a legal site that refers to Aquinas. Calvin was a canon lawyer before he converted, and his arguements on the civil magistrate agree with the schoolmaster. What Aquinas covers is that there is a point where one must disobey, though it leads to loss of job, of liberty and even life. I’ve stripped the references for readability.

However, it is important to keep in mind the context in which Aquinas discourages disobedience; he requires that all those in power should be just so that those who disobey would be unjust. Ideally, God did not want to give kings unrestricted power; instead, he created the role of judges and governors in the king’s place to provide a system of checks and balances. Having judges and governors, instead of a king, would create a system where no one person could rule without accountability. However, the public opposed God’s will and instead asked for a single ruler, which he unwillingly provided. It should not be surprising to anyone if a king falls into worldly temptations, because just like everyone else, a ruler is a person who also requires divine guidance; that is why God did not intend for this role to be created.

Nevertheless, God set standards of how a good ruler should act. Above all, a good ruler must act in a godly fashion, obeying and revering God. He must follow and govern according to the divine law, which is always just. He also has to be a man of integrity to avoid falling into the temptation that comes with material prosperity. Aquinas admits only a few individuals possess these characteristics, but even a good ruler can fall, for humanly desires can turn a good leader into a tyrant.

A tyrant is a ruler that does not abide or rule by God’s divine law, which makes him unjust. His greed for money and other human desires makes him use violence upon his citizens, disregarding the common good of his people. Tyrants lack integrity and fall easily into temptation because of his desire to be wealthier causing him to be an unjust ruler. Since a tyrant fails to fulfill his role as a just ruler, he becomes the cause instability and disharmony. The laws he creates are unjust, as it ignores the divine law, and through his ungodly actions he leads his people astray, which is a sin. Aquinas acknowledges that in order to overthrow a tyrannical government, people must disobey the unjust tyrant. Aquinas uses an example of the early Christians martyrs who were living under a tyrannical Roman emperor who enforced human-made laws that went against the divine law . The harm caused by his tyrannical rule, by creating laws that went against the divine law, was significantly higher than the harm caused by civil disobedience, which is martyrdom for the Christians. By disobeying the tyrant’s laws, they became martyrs, a title revered by Christians; Aquinas even praises them saying, “a certain beauty will shine in them, a beauty though in the body, yet not of the body but of virtue”. Based on the admiration Aquinas shows to martyrs, he views civil disobedience as justifiable during the rule of an unjust government.

Civil disobedience is also justifiable if the laws of a government are unjust. Aquinas states in Summa Theologica that God has given authority figures the ability to create rules they are competent to judge; rulers are only qualified to make laws that judge the exterior behaviour so that it contributes to the common good. Since authority, and power, were given to the ruler by God, citizens are obligated to obey the laws made by the ruler. However, the laws rulers create must be based on natural law, which in turn in based on divine law. This is to ensure the laws are just.

We have, in the West, instituted tyranny throughout our political process. This has led to laws stopping free discussion, and limiting people practising their trade to those who have taken a sign of loyalty: the peck.

This is wrong. This denies mercy. It offends justice. It is rank heresy.