Last night we ended up watching reviews of caravans. I have never wanted a caravan. But the alternative was watching something debased, or thinking about the current situation. We are facing increasing coercion. We are no longer ruled by the law, but by decree, and no one has the fear of God. Even when a decent bloke, a Christian, is murdered by an Islamic Somali Immigrant, one cannot mention religion.

Or let a priest pray over him, for the sake of his soul. 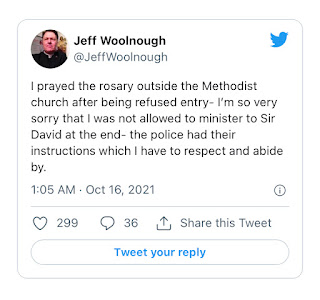 Just one more reason get to holy Mass every Sunday of your life: British MP David Amess denied last rites

Of course, get to Confession regularly as well. Nothing is more important than being prepared to enter the pearly gates when that all-important moment arrives when you face the Lord Himself, no matter however, or whenever, your earthly sojourn is through. 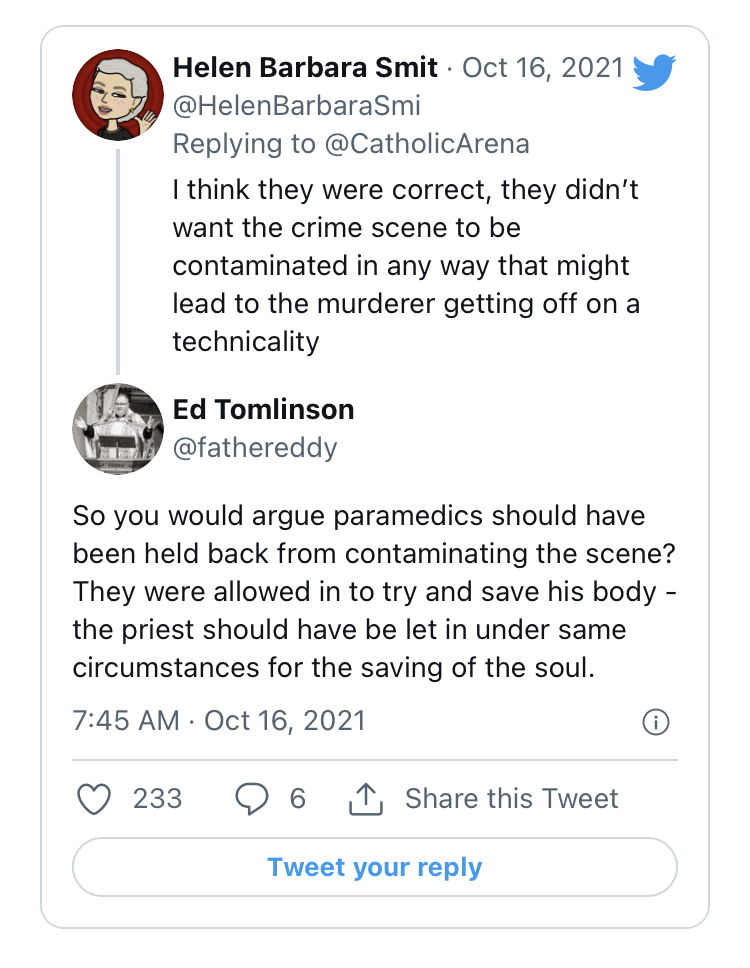 I’m not Catholic. I’m reformed, and the seven or so sacraments that are within the Catholic faith are pared down to two: baptism and communion. (Yes, marriage is not a sacrament for the hard core Calvinist: it is a civil contract). But no man should stop a Catholic priest being at the side of a Catholic man dying.

We know that many martyrs were killed by Athiests, Muslims and other pagans. Without such succor. But, as Adam notes, no one thinks of the spiritual dimensions now. And they are what really matters.

As a commenter in one of the quoted messages so aptly put it, the paramedics were given access to attempt to save the man’s body. Yet the priest was denied access in an attempt to save his soul. It’s clear where our societies’ priorities lie.

Our militant secularised society can now not even fathom the idea of saving a soul. Because in our modern world, souls no longer exist. To believe in the soul from a Christian viewpoint is to repudiate all that modern secularism stands for, or at least believes in. They believe in science. The physical science to save the physical body. To infinitely extend the unextendable. But God will not be mocked.

That those police cannot understand the context or idea of the soul I can accept. They are mere products of the revolution, comrades. That the priest in question blindly accepted their spiritual ignorance is much more annoying. It is less the police that erode away the ground beneath us than priests of this sort. He had a moment to teach not just his flocks but countless others. Instead he simply acquiesced to the powers that want us to submit.

Why are we at this point? False prophets, cowardly priests, corruption and apostasy.

Please note in an apostate nation such as ours no true prophet is allowed to speak. It is the false prophets, speaking on behalf of the modern Ba’al, who are honoured.

My heart is broken within me;
all my bones shake;
I am like a drunken man,
like a man overcome by wine,
because of the Lord
and because of his holy words.
10 For the land is full of adulterers;
because of the curse the land mourns,
and the pastures of the wilderness are dried up.
Their course is evil,
and their might is not right.
11 “Both prophet and priest are ungodly;
even in my house I have found their evil,
declares the Lord.
12 Therefore their way shall be to them
like slippery paths in the darkness,
into which they shall be driven and fall,
for I will bring disaster upon them
in the year of their punishment,
declares the Lord.
13 In the prophets of Samaria
I saw an unsavoury thing:
they prophesied by Baal
and led my people Israel astray.
14 But in the prophets of Jerusalem
I have seen a horrible thing:
they commit adultery and walk in lies;
they strengthen the hands of evildoers,
so that no one turns from his evil;
all of them have become like Sodom to me,
and its inhabitants like Gomorrah.”
15 Therefore thus says the Lord of hosts concerning the prophets:
“Behold, I will feed them with bitter food
and give them poisoned water to drink,
for from the prophets of Jerusalem
ungodliness has gone out into all the land.”

7 For this Melchizedek, king of Salem, priest of the Most High God, met Abraham returning from the slaughter of the kings and blessed him, 2 and to him Abraham apportioned a tenth part of everything. He is first, by translation of his name, king of righteousness, and then he is also king of Salem, that is, king of peace. 3 He is without father or mother or genealogy, having neither beginning of days nor end of life, but resembling the Son of God he continues a priest for ever.

4 See how great this man was to whom Abraham the patriarch gave a tenth of the spoils! 5 And those descendants of Levi who receive the priestly office have a commandment in the law to take tithes from the people, that is, from their brothers, though these also are descended from Abraham. 6 But this man who does not have his descent from them received tithes from Abraham and blessed him who had the promises. 7 It is beyond dispute that the inferior is blessed by the superior. 8 In the one case tithes are received by mortal men, but in the other case, by one of whom it is testified that he lives. 9 One might even say that Levi himself, who receives tithes, paid tithes through Abraham, 10 for he was still in the loins of his ancestor when Melchizedek met him.

The writer of Hebrews is showing how Abram knew there was something greater than his genealogy or his descendants. All people at that time were tribal, but this King came from nothing: he is clearly a type for Christ. In this time insecurity — when business fail and careers are ruined for no other reason than the current rulers remain praised by their PR people and their massaged poll numbers — in this crisis, the only place to look for surety is to that which is not of this world. To a Kingdom eternal. To Christ.

Adam ended by saying that its important to cultivate the spiritual now. It is not important. It is essential. For without this, we will be distracted by the shiny things — not caravans in my case — that I would desire, and then listen to the honeyed words that lead us to destruction.

The elite want us to be like them. We were called by Christ to be the opposite of them.

It’s sad to see how off track many spiritual leaders are now and how many are catering to current whims instead if standing firm in their faith.
Recent examples in the US include Southern Baptist leaders and Mormon acceptance of homosexuality… I predict both groups will see the downfall that Methodists, Episcopals, and mainline Presbyterians have seen.