You should look for the gentleness of holiness in their life. Those who accuse continually often are there to cause division.

We all have our faults. Our peace is too often robbed by those who preach fear and threats and demand that we treat them kindly, while they treat their enemies — often those of Christ — appallingly. If there are a series of victims behind a person’s success, run far away. You may be next. 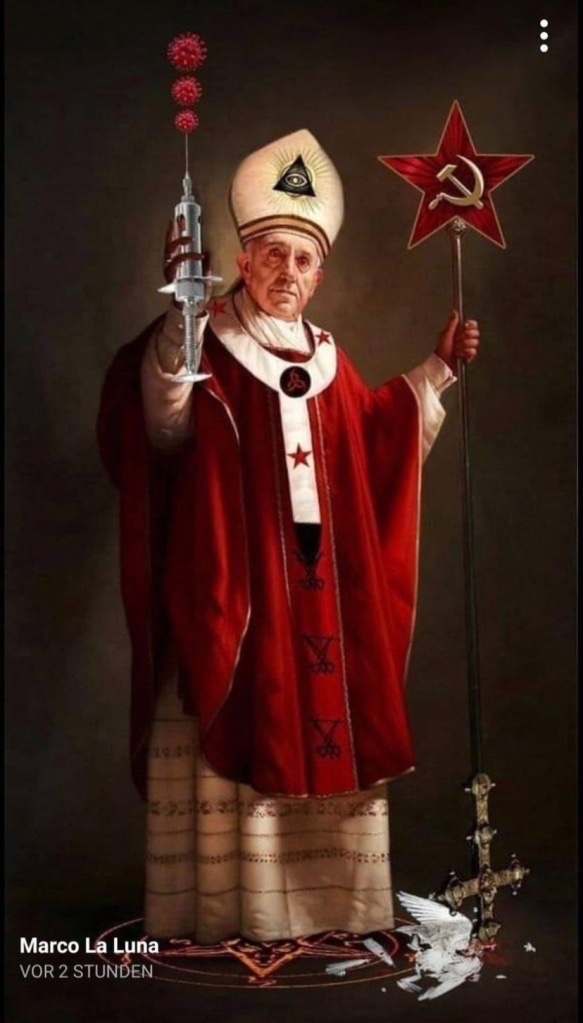 The Roman Catholics give us all a warning. They have a heretic on the seat of Peter. I don’t say that reflexly as a Reformed person. I’m saying that because the Catholic faithful say it.

Indeed, the consequences of naming a manifest heretic like Bergoglio in the Roman Canon means that you join, in some sense, your faith and the name of everyone mentioned as your Mass intentions to that very Pachamama idolater. You join the faith of the faithful departed named about 60 seconds later (after the Pope is named) in the memento for the dead to a man who denied the divinity of Christ in 2015. You join, in some sense, your own personal faith as a priest to that manifest heretic of an antipope who has denied the Church’s teaching on everything from hell to contraception. Who you name in the Roman Canon is first Christ, Mary and the saints, but also the Pope who, in some sense, you join the faith of all believers in the world to.

While I admit that Pope Benedict XVI had potential material heresies (such as his attempt to bifurcate the papacy) this does not reach the level of what St. Robert Bellarmine mentioned of a Pope losing the office if he promoted “manifest” heresies. Without a doubt, a man sitting on the Chair of Peter promoting manifest heresies would be Bergoglio… that is, if Pope Benedict XVI had resigned validly and if there had been a valid 2013 Conclave. But even if I were wrong about the resignation, and even if I were wrong about the Conclave, I would be sure Bergoglio has lost the Office due to grave and manifest heresy and idolatry.

I have noted over the last few years that the current pontiff is one vindictive bastard. He is removing a source of prayer and comfort from the faithful. It might be odd for a reformed bloke to defend Latin, but (a) I understand it and (b) most of the reformers wrote their theological tomes in it. I do have problems with some formulae, but I have problems with everyone. But I would not bruise a smouldering reed. The pope will ban those who use the old rites.

Kea looked at me today when I said that the change is happening now — as we saw the government double down, as our daugther showed us the PM dressed in teenage garb talking every night to her million followers — and was angry. I said change is coming. She does not see it. The press does not show it.

Nurses and Doctors and being sacked unless they bow to the vaccine and the spirit of this age. Their protests are silenced. And the Pastor who led the most recent protest in Auckland is now facing charges.

6 The Lord said to me in the days of King Josiah: “Have you seen what she did, that faithless one, Israel, how she went up on every high hill and under every green tree, and there played the whore? 7 And I thought, ‘After she has done all this she will return to me,’ but she did not return, and her treacherous sister Judah saw it. 8 She saw that for all the adulteries of that faithless one, Israel, I had sent her away with a decree of divorce. Yet her treacherous sister Judah did not fear, but she too went and played the whore. 9 Because she took her whoredom lightly, she polluted the land, committing adultery with stone and tree. 10 Yet for all this her treacherous sister Judah did not return to me with her whole heart, but in pretense, declares the Lord.”

11 And the Lord said to me, “Faithless Israel has shown herself more righteous than treacherous Judah. 12 Go, and proclaim these words toward the north, and say,

31 “It was also said, ‘Whoever divorces his wife, let him give her a certificate of divorce.’ 32 But I say to you that everyone who divorces his wife, except on the ground of sexual immorality, makes her commit adultery, and whoever marries a divorced woman commits adultery.

33 “Again you have heard that it was said to those of old, ‘You shall not swear falsely, but shall perform to the Lord what you have sworn.’ 34 But I say to you, Do not take an oath at all, either by heaven, for it is the throne of God, 35 or by the earth, for it is his footstool, or by Jerusalem, for it is the city of the great King. 36 And do not take an oath by your head, for you cannot make one hair white or black.

You tell me that you do not like the language of Jeremiah. He has called all your priests and spiritual leaders providers of spiritual p0rn. He has. Because the comforting words of prosperity and peace are lies at this time. This is a time of crisis.

Note that Jeremiah was talking about an Israel that had been scattered among the Assyrians, and destroyed. It had reached the point of irreconcilable differences, and God let it go to destruction.

My wife is sick to the stomach, for she does not see peace. She sees conflict. And she feels for our children and grandchildren. And she is angry that half the time I want the war.

God alone knows what’s coming. He does tip His hand on some issues; He’s been very consistent about calling prophets every time He plans to bring His wrath. Granted, we have a surfeit of “prophets” trying to profit from the masses, but there is also a thread of consistent biblical warnings if you look for them.

And it never hurts to get some good analysis from smart people. God put them in place, as well, even if the wise voice doesn’t publicly acknowledge Him. As long as you can discern what they actually know about, it gives you a chance to make a realistic assessment of some things.

I keep saying that I believe we are headed for an apocalypse, or more accurately, a near-apocalypse. It’s not the end of the world; there are too many elements missing from the picture. But it will be one hellacious mess, and we do well to make our best guess about those things we can identify.
…
So, for example, the globalist-leftist axis has almost no truly committed souls. The progressive half of the US is almost entirely fake and empty. The people have had their souls stolen by the Western mythology, so they are flatly incapable of committing their lives to this agenda. It’s just a shallow appeal, but that’s as deep as they go. When a real war breaks out, they won’t be willing to die for their ideals. They only imagine that they would stand up to the last man/woman/thing.

And Satan has them all convinced that it will work. Having been inside of the NATO structure in Europe, I agree with Brandon Smith that the UN would actually be willing to send troops of some sort to support the collapsing globalists in the coming US second civil war. You should scan the comments with the linked article.

We are well past the point of preventing the war, and actually winning is questionable simply because we cannot yet see where God is taking all of this. All we can say is that decentralization is coming at God’s hand. The war will be global in nature, in that things are being manipulated that way all over the world. It’s not just the US. Russia and China are both different brands of globalist (pushing vaccines), just a whale of lot more intelligent about it than their US counterparts. They would both be glad to invade the Americas if they thought it would gain them the resources they need.

There’s no discernible pattern on how things will turn out. In my spirit, I sense that it won’t really matter. In my head, I suspect the political landscape will change so dramatically that we can’t possibly imagine it from where we are now.

None of us can justify ourselves. We are all guilty.

But there is mercy in Christ. Let us preach this mercy. Let us preach repentance. Let us support those people who are of the faith but not as we do it: let us praise God together, though we have theological differences.

Because this is the time when the progressive enlightenment, that thing of blood and suffering from the Jacobins to Pol Pot, is going to end.