Firstly Dan Andrews is a hypocritical control freak, who is not going to stand down when faced with precisely the trigger that led to the premier of Australia resigning. In tears.

Daniel Andrews has explained why he is not resigning after reports he is being investigated by Victoria’s anti-corruption watchdog over a deal struck with firefighters two years ago.

The Opposition said Mr Andrews should follow the lead of former NSW Premier Gladys Berejiklian who stood down last week after it emerged she was being investigated for corruption over her relationship with ex-boyfriend Daryl Maguire.

Ms Berejiklian denied any wrongdoing but said she had no choice but to step down because of her own policy requiring ministers to stand aside if they were being investigated.

Mr Andrews said he would not be resigning because he does not have the same stand-down policy regarding investigations by IBAC, Victoria’s Independent Broad-based Anti-Corruption Commission.

IBAC has been secretly investigating the United Firefighters Union’s role in Victoria’s fire services reform since 2019.

But The Age newspaper on Wednesday revealed the watchdog is also examining Mr Andrews and a senior public servant’s interactions with the union and has interviewed several former and serving Labor MPs and staffers.

According to the report, IBAC has seized mobile phones, laptops and dozens of USBs in its investigation.

No evidence of corruption has been reported publicly.

Speaking outside parliament on Wednesday and again on Thursday, Mr Andrews repeatedly declined to confirm whether he was being investigated by the watchdog.

Legally he may not be able to as it can be an offence for individuals to confirm that they have been interviewed by IBAC or are subject to an investigation.

‘In everything I do, I behave appropriately. I’m very conscious of the oath that I swore and the duty I have to every single Victorian and to suggest otherwise is completely wrong.’

The commission refused to comment on whether it is investigating Mr Andrews.

‘As a matter of practice, IBAC does not comment on whether it has a complaint or investigation before it,’ it said in a statement.

Mr Andrews said he had not spoken to UFU secretary Peter Marshall in more than a year and that he was proud of the Government’s 2019 reforms to the fire services, which involved merging Metropolitan Fire Brigade members and career Country Fire Authority firefighters into the new Fire Rescue Victoria.

I am getting some respect for Gladys. She had standards, and she kept them. It will be interesting to see if Andrews remains. He is pigheaded, a moron, and a member of a party with a reputation for corruption. But he is being hated. Which brings us to an essay by Chris Trotter. 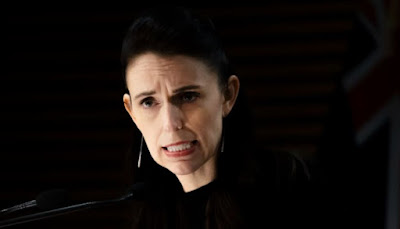 MATTHEW HOOTON has raised the possibility of Jacinda Ardern being gone by Christmas. He puts forward the scenario (Paywalled) of New Zealand becoming as debilitated and beleaguered by Delta as New South Wales and Victoria. With the number of community cases surging above a thousand every day, the hospitals overwhelmed, and people dying for lack of ICU beds, Hooton insists that not only would Jacinda be obliged to go, but also, being a fundamentally decent person, she would want to go. The unfolding Covid disaster being of her making, the Prime Minister would see it as her moral duty to resign.

Sadly, Hooton’s scenario is by no means preposterous. Were New Zealand to be overwhelmed by the Delta variant of Covid-19, the Prime Minister and her government would have to accept that the disaster occurred on their watch. Jacinda and Chris Hipkins, her Covid Response Minister, would have no choice but to resign. The Right would, of course, be delighted at this turn of events, and the Left devastated. New Zealand would be in an ugly, truculent, mood. Many people would be very frightened. The future would be bleak.

How did it come to this? At what point did Jacinda’s extraordinary saga of Covid success suddenly pivot towards failure?

If you are a leader, events can make up and unmake you. Ardern is personally popular to a significant proportion of New Zealanders in a way Gladys and Dan are not. But the policies all three have promoted are not without cost.

An author on the right commented on his post.

Personally, I would see the silver linings in a Jacinda-less future but he is right that the nation would be in an ugly mood. Having endured 8 weeks of full and partial lockdowns only to see case numbers rising each day, there is room for truculence. There is room also for weariness and despair. This will be the best part of two years of people’s lives damaged by lockdowns, and all for nothing. Kids have missed two years of school. Patients have had treatments postponed, which eventually will cause more deaths than COVID ever did. People cannot get home, they cannot visit relatives and they cannot hold funerals. The state of mental health in this country is a widely kept secret, presumably because the government refuses to front up on the damage that lockdowns are causing. So much has been sacrificed on the altar of COVID… yet the case numbers rise every day.
…
Chris may blame the media, but it is more likely that Jacinda’s decision to drop Auckland to Level 3 was driven more by polls than anything. She knew she was losing her ‘team of 5 million’. She knew people were weary of lockdowns, and she knew questions were being asked about the wisdom of her strategy, which was just to do the same thing over and over again… also known as the proverbial definition of madness.

Jacinda will not step down though. The Labour Party knows that she is their best weapon. People love her, although the gloss is beginning to fade these days. I have friends who constantly say how ‘lovely’ she is, but they don’t seem to realise that, in a global pandemic, we don’t need ‘lovely’, we need competent. They treat her like a doll or a favourite grandchild. She is neither of those things. She is the one charged with leading us out of the pandemic and into a future where the country has not been bankrupted. Right now, I would say she is not doing particularly well on either count, but that is all that ‘lovely’ will ever get you.

Labour knows it will be in big trouble without Jacinda. Who will take over? Grant Robertson? Jolly enough, but lacking in general appeal. Chris Hipkins? David Parker? Good grief… their polling will drop like a stone, and they know it. That is why they have to keep Jacinda where she is.

And I have to disagree with Chris’s description of Jacinda as a ‘fundamentally decent person’. Maybe she was, once, but power goes to the head, and no one can deny she has thoroughly enjoyed the adulation she has received so far. As it wanes, as it has already begun to do, we may see her decide that she has had enough, but I doubt if that will happen within the next few months.

But maybe I’m wrong. Maybe Jacinda will step down before Christmas. After all, Chris Trotter did not specify which Christmas… did he?

And here lies the problem. Jacinda is personally likeable, in a way the leader of the opposition, Judith Collins, is not. Nor are any other members of the Labour cabinet. Nor are most if not all of the Australian premiers and politicians. She increased Labours vote in 2017 by ten to fifteen percent, which meant she could cobble together a coalition with the Greens and NZ first. She managed to win an absolute majority in 2020, which should not happen under proportional representation.

But that was a COVID election. The question is can she rule when she has lost moral authority, which is what is happening now. The good news is that her young daughter would see more of her if she did resign. But the Labour party power brokers will do everything in their power to ensure this does not happen.

They have forgotten the Romans had a slave telling every general during his triumph that he was mortal for a reason.

Stupid policy that you have step down if you are being investigated. How about waiting until the results come in, otherwise easy enough to force resignations by initiating investigations?

Are they really, if they are is it really due to Covid, or is this the same BS spin by the media that we are seeing here in the US? An interesting fact from the doctor who ran a large Houston, TX hospital. “ICUs are designed to have a normal capacity of about 85% for efficiency reasons so it doesn’t take much to “overwhelm” the ICU.”

Also, since everyone coming to the hospital is tested for Covid, if you have a car accident but test positive, you are now a Covid patient filling up an ICU bed. The statistics are being manipulated. Death rates for Covid are waaaay down.

I don’t see her stepping down; I think she’ll have to be forced out.