Last night we watched a video about the government changing the exemptions for the jab around midnight Friday, to come in Midnight today. To summarize:

In the meantime Quebec had abandoned mandatory vaccinations. This is what will happen in NZ: our system is, by conservative estimations, 25% understaffed. Hence the need for lots and lots of exemptions.

Health Minister Christian Dubé threatened a vaccine mandate he couldn’t implement, revealing how much the government was disconnected from the day-to-day reality of the health-care network, which has been severely understaffed for years, Vinh said Thursday.

“Now, the government has put themselves on the receiving end of their own budget cuts and realized, ‘Holy moly, the hospital and health-care system is so understaffed that we can’t even fulfil our decree and we’re going to have to do something embarrassing, which is to rescind our mandate,'” he said in an interview.

Dubé said Wednesday that carrying out his threat to suspend unvaccinated employees on Nov. 15 would have seriously reduced health services and compromised efforts to improve working conditions in the network. “To deprive ourselves of 8,000 people, it would have devastating consequences,” he said in Quebec City.

As a doctor and scientist, Vinh said he’s disappointed that some three per cent of health-care workers “don’t believe in the very science that is the basis for the care that we give,” and have chosen not to be vaccinated.

the US courts have struck Biden’s mandate down. I have never seen so short a judgement. The Federal government is being called on riding roughshod over the constitution.

Before the court is the petitioners’ emergency motion to stay enforcement of the Occupational Safety and Health Administration’s
November 5, 2021 Emergency Temporary Standard (the “Mandate”) pending expedited judicial review.
Because the petitions give cause to believe there are grave statutory and constitutional issues with the Mandate, the Mandate is hereby STAYED pending further action by this court.

This will go up in smoke folks — it’s just another threat by Biden and his pals, this time aimed at employers with the threat of huge fines if they push back. But you, as an employee, have all the power. No hospital runs without nurses. Garbage is not picked up without garbagemen and women. Fires are not put out without firefighters, nor are traffic accidents attended to and the “Jaws of Life” don’t operate themselves. Water and sewer systems don’t run themselves either.

Any employer who goes along with this is an equal partner with Joe Biden and this lawless order. The correct answer is to lock the doors, lock everyone out, lay them all off and go home. Yeah, I know, nobody wants to do that. Well, then its up to you America.

You provide the labor. OSHA has zero authority to do this in their enabling laws for the reasons enumerated above. Biden’s administration has admitted they do not have the authority to issue this sort of rule and are using OSHA as a pretextual workaround. 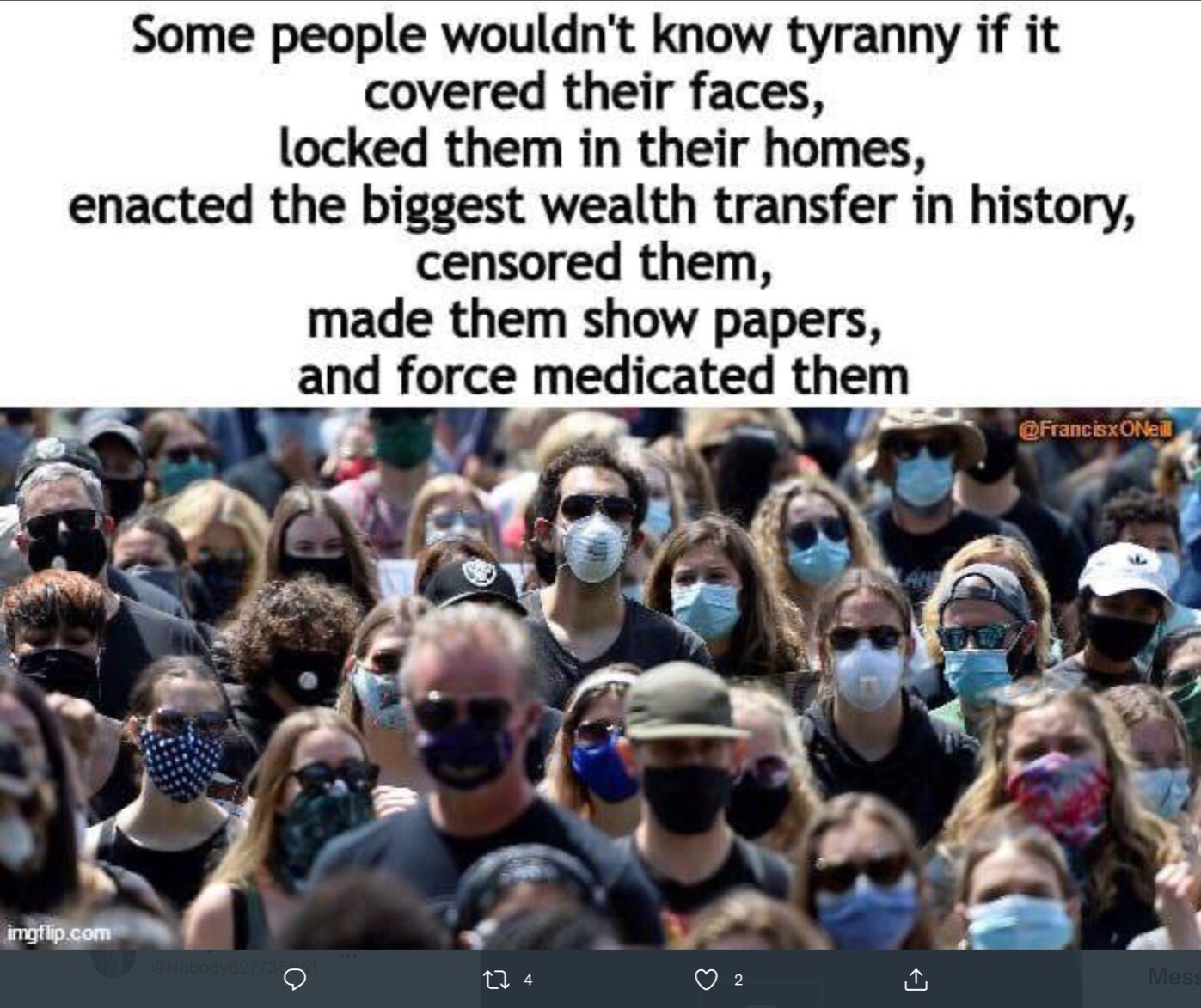 There are four (or more) such petitions before the High Courts of New Zealand, saying that the government can not use enabling legislation to remove rights from the people. One case has already gone against the government. This is a historic time.

What is clear, however, is that the spirit of this age has captured most if not all the political class. Is politics now where we should not be? Or the professions? Should we walk away. CHarlton thinks this is the case.

This is very difficult, because most people are more deeply convinced of their political convictions than of anything else. Yet, I think it is being made evident to us that to be political is intrinsically and necessarily to ally oneself with the powers of evil.

As the months go by, and it becomes undeniable that all powerful social institutions are now on the side of Satan; the only path open to Christians gets to be that of working from one-self (and those one loves, directly and personally).

…In brief: to commit oneself to the side of God, Good and the divine creation and to follow Jesus Christ – and leave the rest to God.

We need to develop a real faith that this is what God wants us to do; and that insofar as we can achieve it in our-selves – then God will work through us.

Furthermore; that God can, will and does work through the ‘group’ of human individuals who are thus aligned: God will do this and we ought not to be interfering.

Any and all individuals who are (at any particular time) aligned with Good; are-being deployed for the Good of the world by God in invisible and unknown ways. This is happening all the time, and it is why Good remains undefeated, and continues to win victories – despite overwhelming global demonic-serving power versus the apparent worldly-powerlessness of real Christians.

We do not seem to have much power. But should we comply? We obey Caesar, yes, until he conflicts with the law of God. Or are things like this false flags and to avoided? I’m suspicious. In crises, by prime rule is that of Uncle Remus. Stay Away from Crowds. This did not end well for the Americans on 6 January. Our evil leadership wants a self identified enemy. The Freedom and Rights Coalition includes men now arrested and facing charges. They are called the enemy, and the working class church of Brian Tamaki is demonized.

What can we do? We cannot control the government: it is possessed not by the people.

We can build networks were we are. We can change local conditions. We can support the causalites of the Vaxx. We can grow gardens. We can comofort our parents, the old, the frail, and the damaged.

We can do good. We can speak truth.

This will deeply offend our elite. But we are not called to be like them.

I’m reformed, and this is for my Catholic and Orthodox Brothers. Elders should be old. Yes, I know we should not despise the Timothies for the youth, but I’ve seen the products of our local theological colleges, and they are not Timothies: I have sat under a couple of young men of God and they kept well away.

The elder should have managed his wife and kids well first. Paul was single and celibate, but Peter, whom he respected, traveled with his wife.

Imagine yourself as a new convert to Catholicism. You’re going to be baptized and confirmed in the Church. You must make your first Confession. To whom would you rather make Confession, a 28 year old lisping graduate of Catholic University who Tweets ten times a day and describes himself on his Facebook page as a “radical foodie,” or a 70 year-old widower who built his own business from the ground up, raised a child with Down’s Syndrome, nursed his wife through Alzheimer’s disease until her death, and then pursued priestly ordination out of a sincere desire to serve Christ and His Church, studying late into the night and accompanying his ordained mentor into the field to gain practical experience?

“Why would the Church invest so much time in someone who might have, at best, ten or twenty years to devote to the priesthood?” I’d answer that question by asking whether the Church would rather get sixty years out of some poofy little funboi who’s never gotten dirt under his fingernails. or a mere ten years from an experienced, serious man who has withstood life’s batterings and who heeded the vocation not because of financial or social need, but rather to burn his life out in sacrifice and service?

I suspect that if traditional Catholic groups like those mentioned above were to put out feelers to see if any older men are interested in becoming Roman Catholic priests, the response would be completely overwhelming.

What would it cost the Church to make such an overture? And what might be the benefits for her, for the glory and honor of Christ and the strength of His Church?

If the Lord were to call Mrs. Orr home tonight, and if the Church had such a program in place for older men, I would fling myself into it headlong, without hesitation or reservation.

I suspect I am not alone.