The question of OPSEC.

Yesterday I was put on special leave because I am not jabbed. There are alternative things I can do, but the regulations around any profession in New Zealand gag you from talking about the current public health crisis. Sam Bailey is in a fight with the medical council over these issues. But to say I’m bitter… well yeah. I can see a way out. But there are those whose entire job is hands on and they have two choices: give up their career or get the jab. 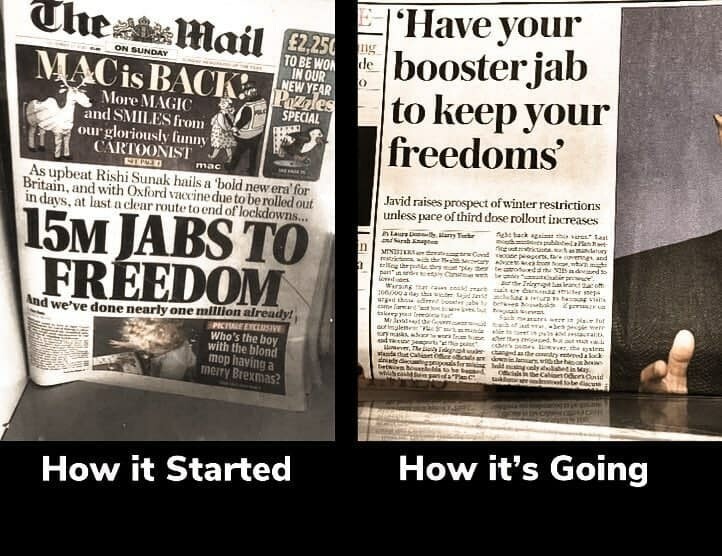 Last night I got an email, from some poor soul in HR. She said — I’m paraphrasing — that she was obliged by the government to have a register of everyone’s vaccine status because if you do not have one jab by midnight last night you cannot enter the building today — but she had no way of proving it. Could we screenshot our record and mail it to her. Because you can’t access health information unless for health care. But that was difficult. Form the ministry of health website:

We are aware there is an issue with some users signing up for My Covid Record and not getting the verification code either at all or fast enough. We are working hard to resolve the issue. In the meantime, you can try a different email address, or try again later.

The lack of organization is pretty much what I would expect. The disconnect between announcement and regulation is followed by a disconnect between regulation and implementation. There are always unexpected consequences. The wise know this. But our rulers are not wise: they are trapped. Besides, they are stupid. Wilder has an excellent article on this, which I will summarize.

The First Law: Always and inevitably everyone underestimates the number of stupid individuals in circulation.

The Second Law: The probability that a certain person will be stupid is independent of any other characteristic of that person.

The Third (and Golden) Law: A stupid person is a person who causes losses to another person or to a group of persons while himself deriving no gain and even possibly incurring losses.

The Fifth Law: A stupid person is the most dangerous type of person.

Vox Day would say Most people are idiots. Charlton would say this level of self destructive stupidity is sothratic: the aim is to burn everything down — driven by useful idiots, but designed by those who do not have the best interests of anyone in mind.

One of the reasons for OPSEC is You don’t want to hang around the stupid. Note that this not relate to credentials or IQ. The stupid do damage to others and themselves, and do not learn.

Understand your situation and start adapting now,while the turd is still sailing through the air, rather than later once it’s hit the fan. We are all one booster shot, errant comment or evil instruction away from getting shit-canned.

If you’re in a vulnerable MegaCorp or public service job, understand that you are on thin ice. Remember why you are there: to stack cash, make connections, learn skills and pack the resume. Start preparing your parachute now.

The first priority is your emergency fund. Being able to survive without work because of a ridiculous mandate for a year or two gives you massive clout. If your mates can do the same, you are a force to be reckoned with.

The second priority is your Plan B. When the Day Comes, have an idea about what you’re going to do next. There’s no excuse for being blindsided from now on.

The third priority is your side gig, which might help with priorities one and two.

Do not expect forty years of loyal service, a gold watch and a generous pension. We are all on borrowed time and need to prepare accordingly.

The problem is that the state won’t leave you alone, though you want no interactions with that level of dysfunction. At all.