I received this email today, from the anti mRNA and anti mandate NZ doctors speaking out for science.

We are contacting you as one of the over 8000 people who have signed for Covid Help Online Clinic, be it vaccine injuries, assessment for exemptions or other reasons.

The clinicians at the NZDSOS Covid Help Online Clinic are trying to assess as many people as possible in regard to exemptions and vaccine injuries.

When clinically assessed as being inappropriate to be vaccinated, we believe it would be good for as many people as possible to have an exemption. If an employer rejects the exemption, you may choose to undertake legal proceedings.

It appears unlikely that we are going to get to everybody in good time and we would like to advise you of other options.

We do request that you do not submit multiple requests as this just further clogs the system. At this stage we are only assessing vaccine exemptions and injuries. We do not have resource to provide early treatment or other advise such as antibody testing. We hope to be able to provide these less urgent services soon.

At the rate things are going, 11 days until my job finishes. To be fair to my managers, they are moving heaven and earth to get an alternative available. But the government moves slowly.

It will be the people who suffer come Nov 16th when thousands of doctors, nurses and teachers are stood down.

The situation in Auckland

Mr Slater’s sister did this. Our Prime minister has lost the middle aged female vote — the gender split in NZ means women support labour 20% more than men do.

Her brother this morning blogged this.

They have begun to walk back the whole idea of restricting Aucklanders, such was the level of outrage they encountered.

But no matter how fast they walk back their statements, Aucklanders will always remember that they at least tried it on for size. The Police also know that there is no way they can cope with a mass exodus.

But you have to look at the underlying decision-making for even uttering such thoughts from the government. It has become abundantly clear that there is no longer any cogent decision making going on in this government. Their own pollsters have detected that voters no longer see the government as sensible, cogent or even believable. This is causing blind panic within the senior ranks of the party.

It is now obvious that the government is using fear to drive up vaccinations. In addition to the message of raw fear is also FOMO (fear of missing out), which is what they have used with Auckland and their threat of locking us all up for summer.

The underlying reason for the government, and Jacinda Ardern in particular, driving wedges in society between the unvaccinated and vaccinated is astonishingly simple and venal.

Jacinda Ardern craves attention and, like the narcissist she is, she wants to be the best or the first or the most popular at everything. She is simply trying to recover from the reputational damage of firstly having the slowest vaccine rollout in the OECD and then letting Delta escape MIQ. So she will start to change the narrative, to say that New Zealand (of course because of her decisions) had the fastest rollout with the best coverage in the shortest amount of time from when they first began. You are already seeing this messaging with her gloating that we have got more of our people vaccinated than Israel.

She wants 90% vaccinated to reclaim her world title of being the best at defeating Covid. But that is the extent of her goals. She just wants 90% plus vaccinated. She surely must know that inside six months the Delta outbreak will be out of control; there will be more vaccinated in hospital and more deaths, in stark contrast to her promises that you’d all be better off.

She is doing this because when she exits and leaves Grant Robertson holding an increasingly sick economic baby she will be able to install herself in a cushy sinecure position at the UN. She is that shallow, venal, and self-centred.

She’s lost the room, at least in Casa Kea. Those who voted for “that lovely lady” (and told me to wind me up — I smelled a communist, and I’ve been allergic to them after working in holiday jobs with Trostkyites when I was 15) now won’t watch her.

Kea tells me facebook is turning against her. This is a time of risk. Hunker down if you are a kiwi, and make the bastards fire you. Ardern may or not be leaving to sort out free trade agreements with the EU.

The Prime Minister was gearing up for the announcement that she would be heading off to Europe on November the 15th to pursue the free trade agreement with the region which has been on the table for the past six years.

Jacinda Ardern came close to admitting she was planning the trip when she appeared to justify it by saying the talks were reaching a critical stage.

Can’t have been that critical because the trip’s now off, not that she ever admitted it was on. Those working to organise it have been told to down tools.

Now you would think the Beehive could have been more open about it. It would have been inappropriate for Ardern to head off to Europe when the country is in such a state of chaos and even more inappropriate for her entourage to come back to the country and claim MIQ slots, even though they had been arranged, when tens of thousands of kiwis are going out of their minds waiting for their number to come up.

Her minders knew she would have got a lot of flak if she had gone, given that she hasn’t yet even set foot in her home town of Auckland since she locked its citizens down almost three months ago. That’s happening sometime next week, we’re told.

Asked about her decision to can the European jaunt, the Beehive spin-doctors simply said: “Options have been looked into but nothing has been confirmed.”

Perhaps they were waiting for an American diplomat to tweet her impending trip to Europe, as one did just before Trade Minister Damien O’Connor headed off to the UK last month. Up until that point no-one had been told he was about to climb on a plane.

This week has been a terrible one for this Government, culminating in the shemozzle over how Aucklanders are going to travel out of the city for Christmas.

Jacinda Ardern set the ball rolling saying the borders would remain in place but citizens have been told they can leave the congested city, but how they are going to manage it at the borders is beyond comprehension.

The Minister of everything, Chris Hipkins, let slip they were thinking about having cars turn up at allotted times at the borders, imagine it, making it to the border on time with thousands of cars before you and thousands more following.

This is Marcus Goulding, a priest from Melbourne. Hat tip to the Cat for giving me a transcript. I agree that this is a war, a spiritual war. Our rulers have gone full moron. I agree with his suggestions, but being reformed I would do things differently.

For one should get on one’s knees daily, confess your sins to God, keep the accounts short, and pray for our nations. You should never trust the rulers in this fallen time.

Today, people speak a lot about being “woke”. Broadly speaking, being “woke” means that you are “awake” to injustice. It is time that we wake up! Open your eyes! We are in a spiritual war between God and Satan for every human soul. This war has been raging since the fall of Adam and Eve and continues to rage in different manifestations in every time and place. The war is raging particularly fiercely in Victoria at this time. From this spiritual perspective, we can see that this Bill is an instrument of Satan because of the sweeping powers it grants the Premier and Health Minister over every aspect of life.

Against Satan stands the Son of God, Jesus Christ. He has already won the decisive victory against the forces of Satan and He provides us with the tools and weapons we need to share in and extend His victory. As we heard in Psalm 17, “My God is… my shield, my mighty help, my stronghold.”

The second set of weapons Jesus gives are the sacraments. The sacraments provide us with the graces we need to live God’s Law. One sacrament, above all the others, is of critical importance in this spiritual war: the sacrament of confession. How many excuses we make to avoid going to confession: I don’t know what to say, I don’t have anything serious to say, I am too embarrassed, I don’t know what to do… These excuses will not cut the mustard at your judgment. We all sin every day in one way or another. Get over it. Jesus has gone to the trouble of suffering and dying to offer you mercy and forgiveness. If you don’t know what to say or do, pick up a book, search the internet, or ask the priest. Start going to confession regularly, once a month or more. For the Baptised, the sacrament of confession is our most potent weapon against Satan.

Our third weapon is prayer. We must pray, pray, pray that this Bill does not pass. In particular, let us pray the Rosary daily until this Bill is voted on in the upper house. Mary has promised us that her Immaculate Heart and the Sacred Heart of her Son will triumph.

For prayer, I would use whatever. Personally, the Anglican Book of Common Prayer is a great aid. I would not pray the rosary or to the saints. The good father is talking about the armaments that the Papists have.

We have all that and more. The Holy Spirit is with the faithful.

The government has decided that the only exemptions to the mandated vaxx can be made by the director general of health. 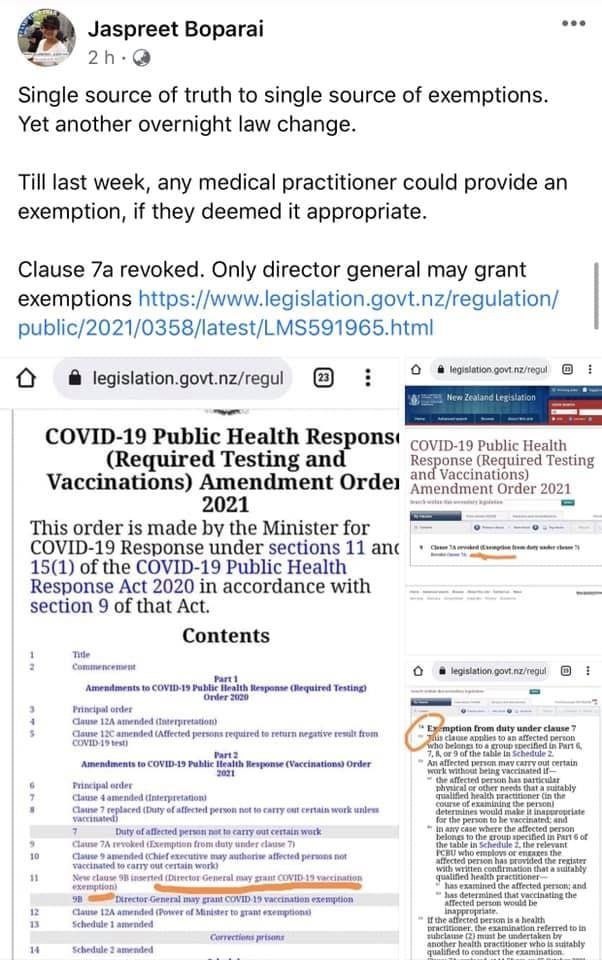 Weka – no. I shudder to answer your question but I know parents who are *cheering* that the jab is coming avail for smallest creatures. The other parents are being pressured to leave. But SF is not particularly parent friendly on the best of days.

We have the same parents here. They will sacrifice their children for virtue signals. There is a name for them. Karens.

I see San Francisco will be mandating the jab for 5yo indoors anywhere as soon as it’s possible. AKA in 8-10 weeks.

Do they want every parent to leave? I fear the answer is “Yes”

As always, prayers are with you. The Evil that they are attempting on good people, though, becomes more obvious every day.