The situation here in Casa Kea continues to move. Of some interest is that we are now able to do other things, which means some more photos have been processed. There have been a couple of links added. I have managed to get my brother printer and scanner working — it required using the brother drivers, then installing vuescan.

Vuescan is very good, and if you have a scanner you should use it regardless of OS.

However, the main thing I want to expand on was in a comment reply. Heresolong wrote:

Off topic but just picked up an old laptop from work (tech director let me have it because it was retired from my classroom about three years ago and no longer used). I’m going to set up a Linux box, just to play around. I’ve been reading your tech posts and will be going back but a lot of it is mumbo jumbo to me as you talk about all the different things you’ve tried and used. Can you recommend a basic “Use this version” of Linux to get started and a basic “Use this program” to make the Linux box useful and navigable? I noticed “Neon” the other day which seems to be a GUI overlay (ignore my improper use of terminology please).

I may have asked you this a couple years ago but now I actually have a computer to put it on and honestly have no recollection of whether I really asked or what the answer may have been.

Thanks. And no rush, just when you might have some time. Or maybe even a post recommending a basic package for people thinking about the topic.

What I want to do is give an expanded answer.

Firstly, I need to explain what a distro or distribution is. Linux, technically, is the Kernel of the operating system and nothing else. Most unix-like systems have a kernel — in Apple it is based on BSD, and in Google Chrome OS it is based on Gentoo. A distro adds to a kernel a series of utilities such as file formats, drivers for keyboards and screens, file managers and software. Some are very bare bones: for instance Arch Linux and Gentoo, when installed, have no user interface at all. More middleweight distros set up a user interface but don’t add many applications. At the larger end are full distros that add a lot of default applications.

The minimal distros are around 800kb in size, lightweight about 1.2 GB, and large ones over 4 GB. That is as a compressed file, usually using the old .iso format that DVDs and CDs used. The largest full distros used to come as multiple DVDs.

A three years old computer is less than ideal from the hardware point of view, but in general you want to not have the bleeding edge stuff. I find that getting something that is refurbished or midrange (ie. Last years specs) works. You generally should look around, and see what is available and if they will take it back if it does not work. If they won’t you want free or close to it.

I can run almost anything on my old laptop. I’ve had it for seven or eight years. It has been upgraded a couple of times. The things that are breaking now are the battery, the wifi, and the screen. To stop the comments: the modifications include upgrading ram, replacing the hard disk, and adding a USB wifi stick. The stick is now mashed into the computer and the SSD is four years old. The screen has gone.

It is now cheaper to get something else, so I’m on the market. I’m looking for new or close to. I want at least a 12 month warranty. Refurbished lenovo think pads go for about 1100, and new ones go for about 1600 to 2 k. I’m sticking with AMD processors right now on price/performance if new. In my view screens matter more than the latest bleeding CPU. An example of what I am looking for: 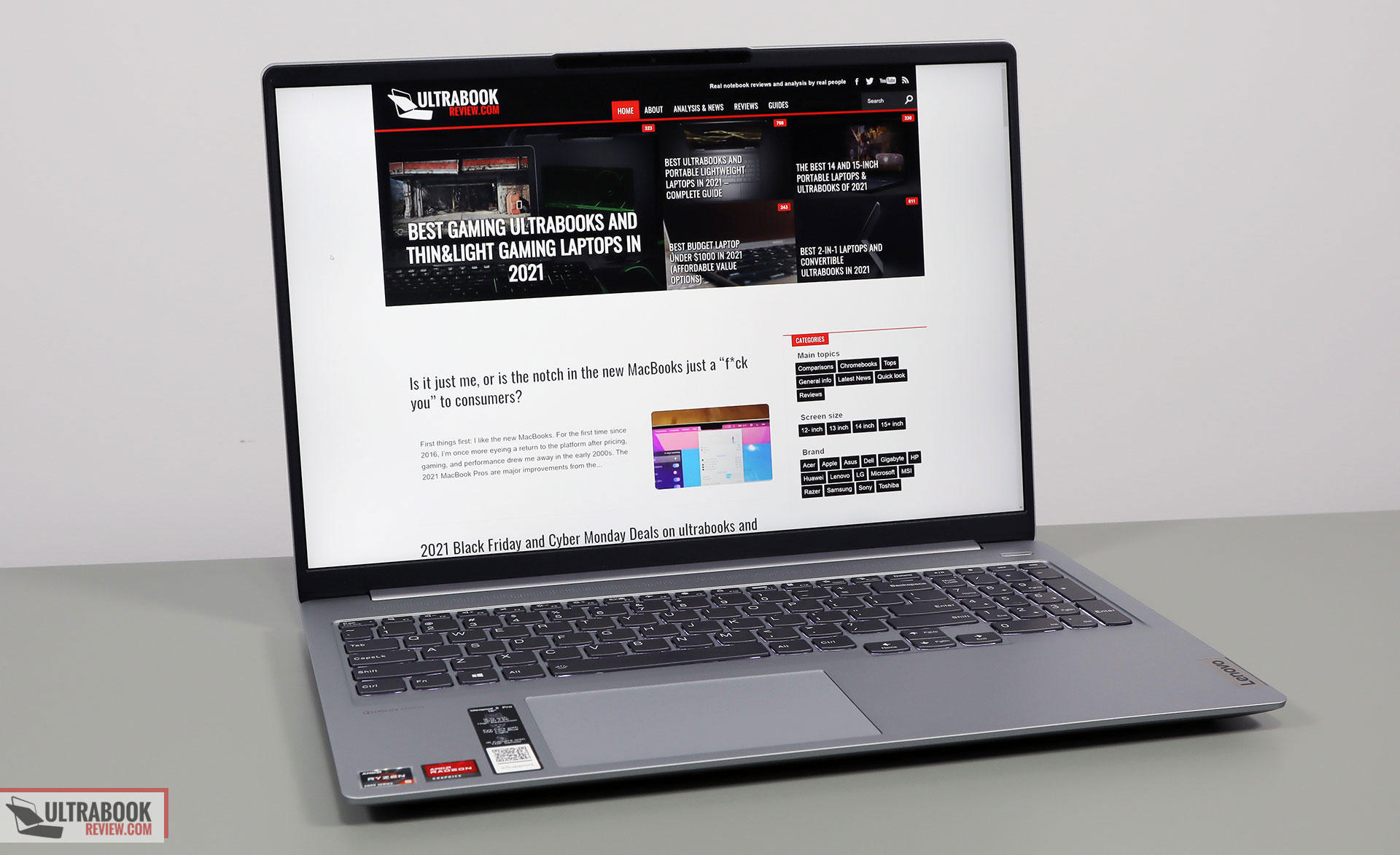 I was looking to get my hands on what is over here a very good value full-size laptop, the Lenovo IdeaPad 5 Pro 16, and I was able to snag one for an excellent price this Black Friday.

This is similar to the IdeaPad 5 models that I’ve tested in recent months, but also a superior design in several crucial ways.

The construction is entirely metal, Lenovo no longer skimped on the screen and included a 16-inch 16:10 matte panel with ~100 sRGB color coverage, and internally this is built on a full-power Ryzen platform with optional Nvidia graphics, as well as a large 75 Wh battery. Throw in a USB-C charger, an excellent selection of ports, and a webcam with IR, and this is unrivaled at the ~650 EUR that I paid for my unit.

Sure, this here is only a Ryzen 5 5600H configuration, but with 16 GB of RAM and 512 GB of fast SSD storage, so plenty for everyday use and multitasking. Higher tier models are also available going up to a Ryzen 7 5800H processor and Nvidia GTX 1650 graphics, but the better value is in this affordable model here. Especially since the thermal design is similar between all configurations, and it allows for quieter fans and excellent temperatures on the configurations without a dGPU, such as this one.

This is available in NZ, which means it passes the baseball test. But is is $2049 at base level. That is the very most I would spend on any hardware. Bluntly, I’d go refurbished rather than spend that.

You need to be able to take it back, carrying a baseball bat if needed. You will probably need to get things locally either from bricks and mortar stores or on line, but it must be in stock. The reason I won’t buy an preloaded laptop from slimbook or similar is because they are not based in NZ.

Kea has an ideapad. The first one we got had a broken screen, but the retailer just replaced it. That is the kind of service you want.

The next think you need to do is check that it works. Duckduckgo is your friend. A quick search found one problem with the wifi driver and how to fix it. Do your due diligence before plonking down the cash. If it does not work with one OS, do the same thing with another. For instance, Ubuntu requires the newest version.

When you get the machine, work out how to get into the BIOS, ie which keys to press. For Lenovos that hs F2.

Did I add that your budget is what you can pay for in cash?

Now, on Macs. I have used them for work, and they are now as affordable as other machines. But don’t use them for linux. The M1 chip versions (ARM) of distros are getting usable, but they need another couple of years. Getting into the machine is a right royal pain.

Right now, stick to Intel/AMD. You should now know what are the base systems you want to run. In order of ease of use they are:

Right now I would use as a first install a ubuntu based system, or manjaro if it does not work. I started using RPM based systems, but I started doing this in 1999. I have installed everything on that list but linux from scratch. You want easy. Ubuntu systems generally work.

The next thing you need to think about is what user interface to use. My strong advice here for a newbie is KDE. It is what I use, and I’ve used almost everything. Here are the options.

There are other things around. Budgie is pretty, but not that useful in my hands for production.

I’ve played with i3 (tiling manager) because I can, but only put that on if you are keyboard centric and want to spend a few weeks learning it.

Now for choosing what to use.

Now, for a newbie, the ubuntu based distros are easier because everything is basically there.

If your hardware is older, and weird, try MX Linux. It is stable, and comes with fluxbox, xfce and kde/plasma versions. There is also a version which is designed for newer hardware.

For KDE I would use Neon. As I’ve said before, I like KDE and the Neon mix is simply pretty. It is also middleweight — which allows me to use more disk space for what I need, not software I don’t use.

For xfce I would use mxlinux xfce mix. It has two versions: one for newer hardware and one for older stuff. If you want more fun, another option is manjaro. This is less user friendly and more powerful. It is what I use on my desktop, There are versions you can download various user interfaces. I use manjaro on my main desktop, and it is rock stabel.

Installation involves downloading the image, and generally exporting this to a USB stick. I recommend that you use Balena Etcher for this: it works regardless of what machine you have.

From then, the install is fairly painless. I would recommend using the entire Hard disk for linux, if you can. Dual booting is possible, but ideally you make the jump.

Post install, update the system. Most of the modern distros have graphical utilities for this. Much of the software you need will be there. Common programs include.

I don’t play games. If you do, steam will play nicely with all of these options.