The current travail will end, but not yet. The consequences for those who have aligned themselves against the word of God will be… just. For by the measure by which they have have oppressed others, so they shall be judged. The propaganda has not ended yet. The blasphemies are continuing. 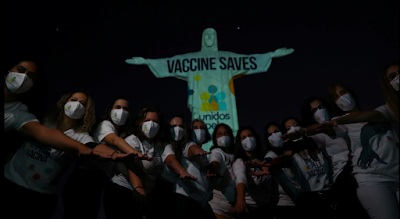 An example of how this works out and the spiral into irrationality started, you can’t go far past Kunstler.

The descent was provoked by the existential anxiety over the collapse of techno-industrial economies and the end of progress as-we’ve-known-it. (Have you noticed: it was the self-styled “progressives” who went the craziest?) As Dr. Desmet lays it out, the disconnectedness of contemporary life, its lack of meaning or purpose for many, leads to unendurable anxiety. All that inchoate fear seeks desperately to attach itself to some real object, some thing or some force that can be comprehended, fought, and triumphantly overcome. Finding such a target produces an intoxicating sense of communal connection, purpose, and meaning, driving actions that are often crazy and also absolutely impervious to rational debate.

The angst in America was well established by 2016. A beaten-down middle-class suspected that left-of-center politicians did not have their interests at heart after years of off-shoring their jobs, and they managed to elect their avatar, Donald Trump, over the obviously unsympathetic globalist, Hillary Clinton — who snootily tagged her opposition “the deplorables.” Even so, the polls had her ahead by a mile. Then, by some weird twist of fate, she lost a few crucial counties in midwestern states she hadn’t bothered to visit, and was reportedly too plastered after midnight on election night to come down and console the troops at campaign headquarters. The shocking election outcome instantly deranged the nation’s entire managerial class and its thinking-out-loud interlocutors in the news media and on campus.

The Golden Golem of Greatness, as I liked to call Mr. Trump, was the perfect target for their animus. Threatening to “drain the swamp,” he would shatter their hard-won power privileges and deprive them of their well-worn grifts — such as the various revolving doors between big money and its regulators. Plus, his rough personality offended their own pretense of decorum (in pursuit of that power and grift). They decided that he had to go, and fast, and the whole managerial class and their allies closed ranks to get it done, not least the vicious agents of the Intel “Community,” which force-fed all the federal legal machinery — the official instruments of punishment.

If they could only knock Mr. Trump off the game-board, America’s troubles would be over. We could get back on track to becoming a utopia of inclusion, diversity, equity, and self-driving electric cars.
…
What a lifesaver the ‘Rona was for wobbling Wokedom, a cornucopia of boons, the gift that kept on giving! It provided an opportunity for perhaps the most craven public-private cartel in all the land, the CDC / FDA / NIH / NIAID / Big Pharma gang, to work some amazing hoodoo on the Golden Golem of Greatness and eventually all the nations of Western Civ. It put the perfidious, money-grubbing, and medically incompetent Dr. Anthony Fauci at the elbow of Mr. Trump as, in effect, the National Covid-19 Coordinator. He played the President like a Flugelhorn through most of 2020 — and, as the year ground on, Mr. Trump looked like he painfully suspected as much in all those ghastly televised daily briefings.

We will not go into the appalling mRNA vaccine boondoggle in detail here, except to say it reaped zillions for those with a stake in the patents, including Dr. Fauci. …

Remember: the Progressive-Woke-Marxist-Jacobins liked nothing better than inflicting punishment. In fact, when you swept away all their ideological bullshit and the associated hustles, the movement was strictly about coercion, about pushing other people around, making them do as the Woke commissars willed. And there was a clearly sado-masochistic edge to all that. They relished cancelling people, wrecking careers, destroying reputations, livelihoods, marriages, families. Their political leaders had no qualms about exterminating hundreds of thousands of small businesses in Covid-19 lockdowns orchestrated by Woke heroes like Mayor Bill de Blasio of New York City and Governors Gavin Newsom of California and Jay Inslee of Washington State. And, of course, their darlings of the streets, BLM and Antifa, bashed-in shopfronts, looted all the merch, and burned down the buildings with mad glee.

But, most importantly, Covid-19 gave the political Left something else to focus its angst on once Mr. Trump was finally swept off the scene in the janky election.

Yep long quote. But these bastards have nothing but power. They have sacrificed faith, family, children, health and any intelligence and discernment they possessed to keep power. Because if they keep powerful they are useful to the spirit of this age.

And they have forgotten there is a judge. I am not sure when we will reach the point where the sins we have done will mean that God will destroy our nations but I know this: he did it to Israel. If he won’t spare Israel, he won’t spare us.

8 Behold, the eyes of the Lord God are upon the sinful kingdom,
and I will destroy it from the surface of the ground,
except that I will not utterly destroy the house of Jacob,”
declares the Lord.

9 “For behold, I will command,
and shake the house of Israel among all the nations
as one shakes with a sieve,
but no pebble shall fall to the earth.
10 All the sinners of my people shall die by the sword,
who say, ‘Disaster shall not overtake or meet us.’

11 “In that day I will raise up
the booth of David that is fallen
and repair its breaches,
and raise up its ruins
and rebuild it as in the days of old,
12 that they may possess the remnant of Edom
and all the nations who are called by my name,”
declares the Lord who does this.

13 “Behold, the days are coming,” declares the Lord,
“when the plowman shall overtake the reaper
and the treader of grapes him who sows the seed;
the mountains shall drip sweet wine,
and all the hills shall flow with it.
14 I will restore the fortunes of my people Israel,
and they shall rebuild the ruined cities and inhabit them;
they shall plant vineyards and drink their wine,
and they shall make gardens and eat their fruit.
15 I will plant them on their land,
and they shall never again be uprooted
out of the land that I have given them,”
says the Lord your God.

57 Now the time came for Elizabeth to give birth, and she bore a son. 58 And her neighbors and relatives heard that the Lord had shown great mercy to her, and they rejoiced with her. 59 And on the eighth day they came to circumcise the child. And they would have called him Zechariah after his father, 60 but his mother answered, “No; he shall be called John.” 61 And they said to her, “None of your relatives is called by this name.” 62 And they made signs to his father, inquiring what he wanted him to be called. 63 And he asked for a writing tablet and wrote, “His name is John.” And they all wondered. 64 And immediately his mouth was opened and his tongue loosed, and he spoke, blessing God. 65 And fear came on all their neighbors. And all these things were talked about through all the hill country of Judea, 66 and all who heard them laid them up in their hearts, saying, “What then will this child be?” For the hand of the Lord was with him.

We will know if God has mercy on us in this way. There will men of God raised who will preach repentance and reconciliation. That we may find unity in Christ. That diversity and division will be avoided. That the nations may be one in their worship of God.

The rulers and priests and pharisees (read the Twitterati and the Karens) hated John the Baptizer. Not as much as they hated Christ. What they are is frightened, terrified, that we will ignore them and their converged upper levels of all hierarchies and not ask permission or approval when we build better. William Briggs counsel for our Catholic Brothers is worth considering.

Now is a not a good time to be alive. Our rulers and elites are immoral, greedy, concupiscent, haughty, short-sighted, lovers of self, really quite stupid or in thrall to insane ideologies, and, worst of all for the great majority of bishops, complicit with the enemy or cowardly.

You’ve heard the CS Lewis’s line about men without chests. We’re living through an entire era of soy-shrunken chests, the inevitable consequences before our eyes daily.

It is only going to grow worse. We know this for all the reasons we’ve discussed over the years. There’s no point repeating them here.

Anyway, you have to gut it through. We all do.

Oh, there are many practical things to try. Avoid all silliness. Seek out an FSSP or SSPX parish, if you can. Which most of us cannot (there are none anywhere near where I live either). Try to find a mass without guitars, hand holding during Our Father, or enthusiastic women.

Women were everywhere. Not just in making sandwiches, which is right and proper, but lecturing us from the dais, giving us our minute-by-minute schedules, hanging around in all portions of the day’s activities, guiding us everywhere.

Well, not unlike your RCIA, really. The solution is obvious.

If we are going to take over, or stand any chance at all, we have to build. And to build you must have a foundation. There is no better foundation that knowing why you are here, what life is about, and what you should be doing.

If there is no faithful community locally, consider if you can make one. Consider if you can travel. Brother Adam travels hours, and across a border to find the Sedevacantists. We are attending home church, because our feckless tyrant has banned all church services unless they have a vaxx pass. Know this: God is moving.

And the gates of hell will shake.

One of my favorite Communion hymns. Will be sung at my funeral.