This morning we sat over coffee, and Kea was saying again that she cannot understand why other people don’t see what we see and act accordingly. We have seen social pressure from the church ladies mean people get vaccinated to go to worship. Our Minister of Covid has said health care workers must get a third dose, and stopped tourists coming in for summer. Similar things are happening world wide.

We’re WAY beyond incompetence at this point. We’re past the point of simple lies now too. The Fake Science we’re supposed to trust is now literally inverting observable reality.

I’ve been told that I can’t work for my employer unless I get on this vaccine fast track. I have family members who are on it. I hope that the narrative is correct, but the data does not show that.

But people are choosing to believe the lies, not the evidence, because that is socially acceptable. The vaccine is the pressure point right now. But there will be other ones. There always are.

And God has a sense of humour. Zechariah being mute was a correction because he did not consider that like Abram, he could have children in late age. But it also made people wonder as to what this child would be.

We forget that the pregnancy of Elisabeth gave Mary courage that God would provide for her. If Elisabeth could have a miracle, so could she.

14 For a long time I have held my peace;
I have kept still and restrained myself;
now I will cry out like a woman in labour;
I will gasp and pant.
15 I will lay waste mountains and hills,
and dry up all their vegetation;
I will turn the rivers into islands,
and dry up the pools.
16 And I will lead the blind
in a way that they do not know,
in paths that they have not known
I will guide them.
I will turn the darkness before them into light,
the rough places into level ground.
These are the things I do,
and I do not forsake them.
17 They are turned back and utterly put to shame,
who trust in carved idols,
who say to metal images,
“You are our gods.”

18 Hear, you deaf,
and look, you blind, that you may see!
19 Who is blind but my servant,
or deaf as my messenger whom I send?
Who is blind as my dedicated one,
or blind as the servant of the Lord?
20 He sees many things, but does not observe them;
his ears are open, but he does not hear.
21 The Lord was pleased, for his righteousness’ sake,
to magnify his law and make it glorious.

5 In the days of Herod, king of Judea, there was a priest named Zechariah, of the division of Abijah. And he had a wife from the daughters of Aaron, and her name was Elizabeth. 6 And they were both righteous before God, walking blamelessly in all the commandments and statutes of the Lord. 7 But they had no child, because Elizabeth was barren, and both were advanced in years.

8 Now while he was serving as priest before God when his division was on duty, 9 according to the custom of the priesthood, he was chosen by lot to enter the temple of the Lord and burn incense. 10 And the whole multitude of the people were praying outside at the hour of incense. 11 And there appeared to him an angel of the Lord standing on the right side of the altar of incense. 12 And Zechariah was troubled when he saw him, and fear fell upon him. 13 But the angel said to him, “Do not be afraid, Zechariah, for your prayer has been heard, and your wife Elizabeth will bear you a son, and you shall call his name John. 14 And you will have joy and gladness, and many will rejoice at his birth, 15 for he will be great before the Lord. And he must not drink wine or strong drink, and he will be filled with the Holy Spirit, even from his mother’s womb. 16 And he will turn many of the children of Israel to the Lord their God, 17 and he will go before him in the spirit and power of Elijah, to turn the hearts of the fathers to the children, and the disobedient to the wisdom of the just, to make ready for the Lord a people prepared.”

18 And Zechariah said to the angel, “How shall I know this? For I am an old man, and my wife is advanced in years.” 19 And the angel answered him, “I am Gabriel. I stand in the presence of God, and I was sent to speak to you and to bring you this good news. 20 And behold, you will be silent and unable to speak until the day that these things take place, because you did not believe my words, which will be fulfilled in their time.” 21 And the people were waiting for Zechariah, and they were wondering at his delay in the temple. 22 And when he came out, he was unable to speak to them, and they realized that he had seen a vision in the temple. And he kept making signs to them and remained mute. 23 And when his time of service was ended, he went to his home.

24 After these days his wife Elizabeth conceived, and for five months she kept herself hidden, saying, 25 “Thus the Lord has done for me in the days when he looked on me, to take away my reproach among people.

The blindness comes from where?

The lies of this world?

I would suggest this: that a lack of trust in God and that he will preserve you or take you to somewhere better — which is what kept doctors working during the black plague, mothers conceiving in a time when one in ten died in childbirth, and the covenanters, the Huguenots and the Recusants holding to the faith while the state killed their priests and ministers and jailed them — then we will lose track of the truth.

Because we cannot discern the truth we will be blind and deaf. Because we have no knowledge of the right way, we will walk in error while still thinking ourselves as wise. Some examples of this.

Our doctors lie to us and withhold life-saving treatments every day – because they have been trained to think in a very regimented way by a medical system that has devolved to the level where we’d be better off having a backwoods shaman sprinkle chicken’s blood over our heads to ward off the flu.

The politicians who trust those doctors to dispense sensible advice, are held captive by fear of putting a single foot wrong, and operate on an overabundance of the Precautionary Principle. They know that they can and will be blamed for everything that goes wrong, and will get very little credit for what goes right, at the polls. Which is why they almost always overreact, and then frantically try to dodge responsibility when the blame is due for the fact that their apocalyptic predictions failed to come true.

Our news (((media)))))))), staffed by treacherous and disgusting presstitutes and whorenalists, do not seek out the truth, because they are beholden to corporate interests. Those interests are in turn tied to a financial system built entirely on massive amounts of credit.

And that financial system lies to us at every opportunity, telling us that our net worth is increasingly rapidly on paper, while our actual ability to buy things erodes by anywhere between 10% and 30% every year.

Our eyes and wallets flatly contradict what our institutions tell us to our faces. We must choose what we trust more – the plain evidence that slaps us in the face every single day, or the breathless pronouncements of flawed and failing governments and other institutions.

The natural consequence of this failure of trust is that we no longer know where to get our information. Where once we could more or less trust the newspaper, radio, or TV to tell us “just the facts”, that is simply no longer the case, and has not been for a very long time – for this is not a new phenomenon. It has simply accelerated rapidly over the past few years. 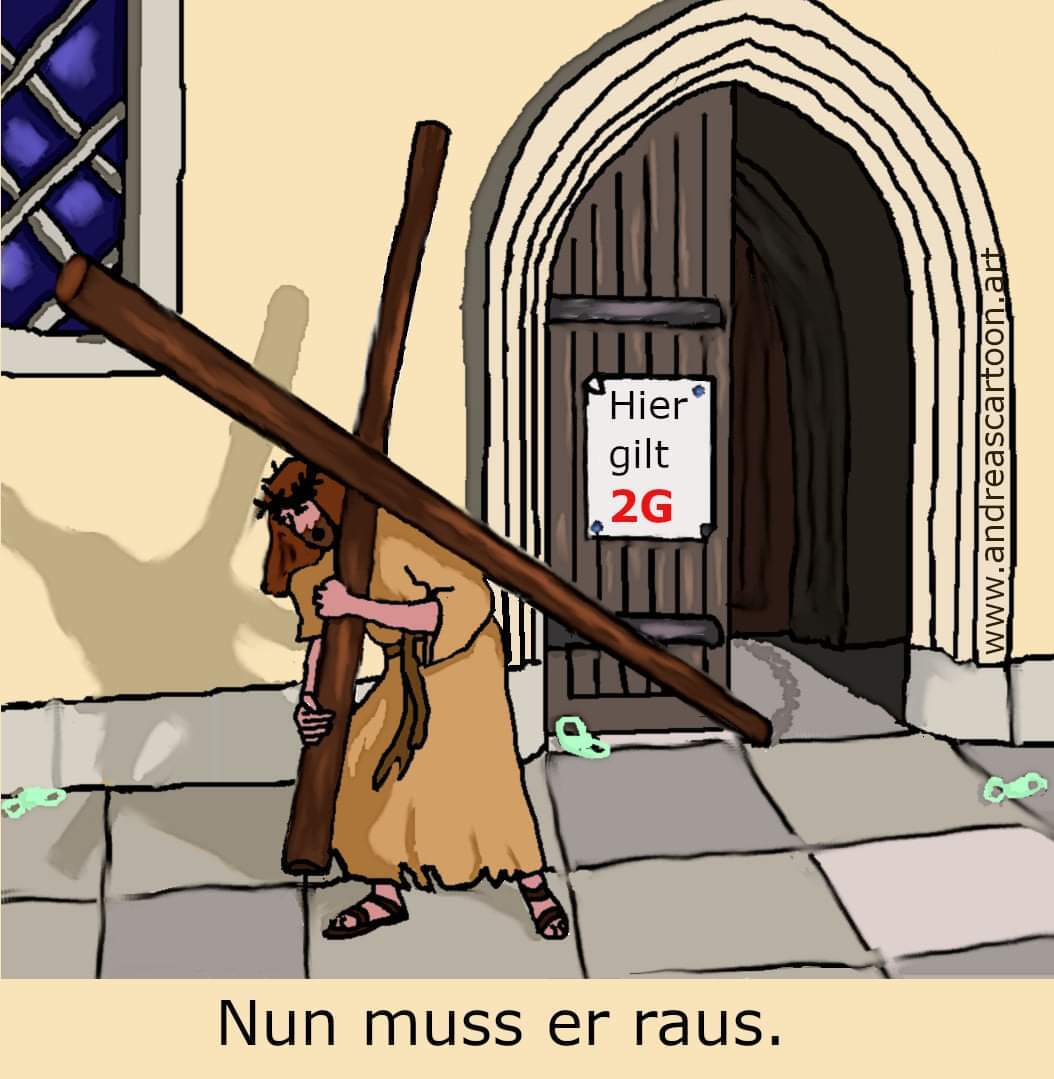 From Social Galactic: someone reporting on the German Press.

The sheer hate thrown at the Purebloods by the Twitter mob, pushed by the Zombie Moodblood politicians, is hard to believe. English language publications (at least in England) are incredibly mild, comparatively. Translation doesn’t get close to the desperate panic of the Zombies & Mudbloods.

I do not know if we are going to find new apostles and prophets raised up now. If we do, it means that God is not finished with us, and will bring a revival regardless of what the state does.

I do know that the faithful in Christ are ignoring their apostate bishops and cardinals — yes, the Prots have the same kind of people, but with different names — and communicating horizontally to encourage each other.

I praise God that I can go to church still. The news can remain switched off: it is lies anyway. We have to preserve what remains. We have a church to build. If needed, we will build a parallel society.

For we know that Christ, who was born into poverty, is the King of the Church and will rule the world on his return.

When leaders show themselves unworthy of their office, the people will find new leaders – the easy way, or the hard way.