There is a protest today. The government is spinning this as the work of the violent, the loons, and a threat to public safety. 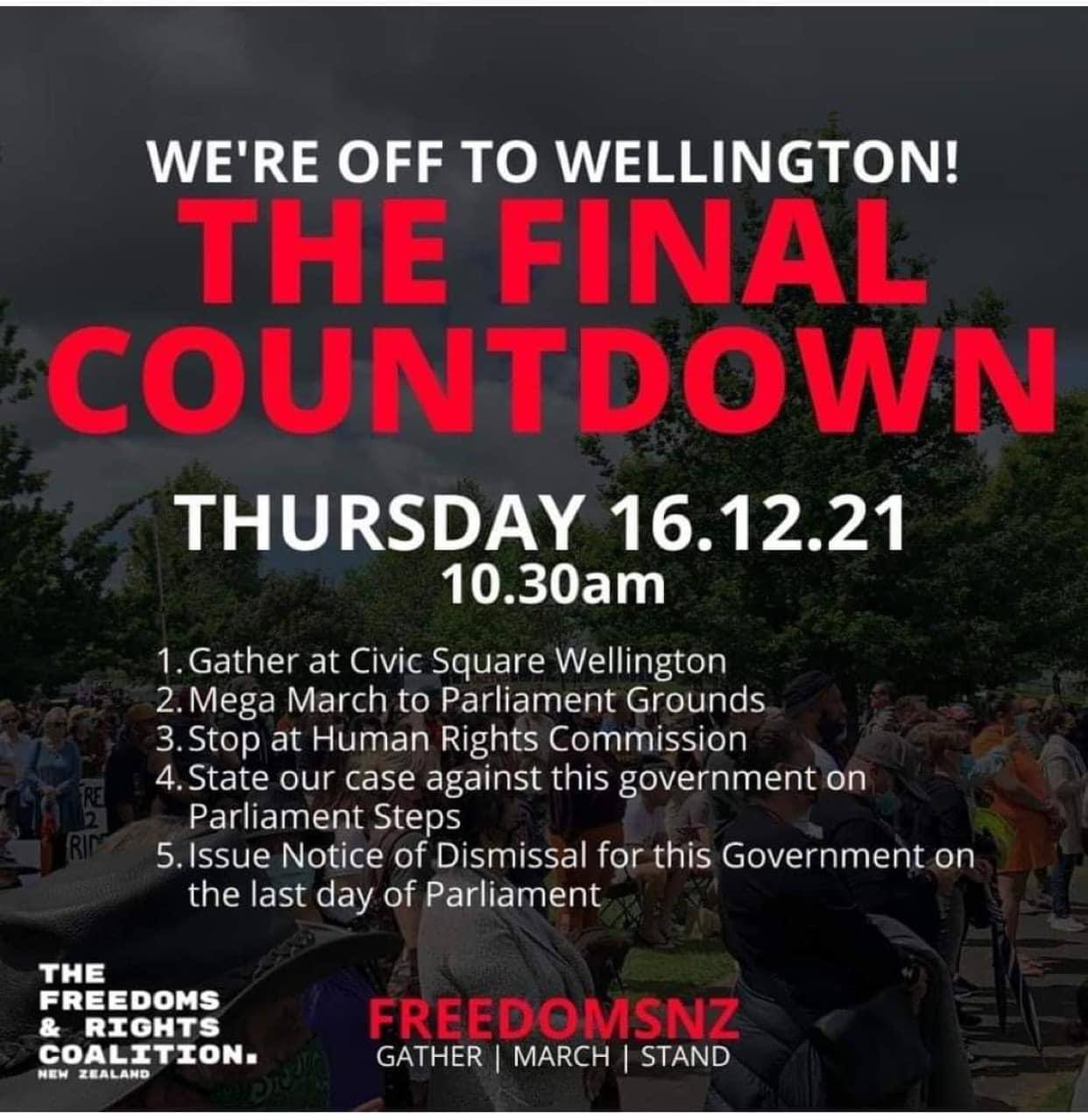 Wellington government workers have been advised to work from home or conceal their identity, due to concerns they could be targeted by protesters.

The Freedom and Rights Coalition is staging a protest in the capital from tomorrow morning, demonstrating against Covid restrictions and vaccine mandates.

The Herald has seen an email sent to WorkSafe employees, suggesting they work from home to stay safe from potential abuse towards government staff.

“With WorkSafe’s growing association with Covid-19 enforcement, during the protest we need to keep a low profile and take extra precautions to keep you safe,” reads the email.

“In light of this, where possible, work from home on Thursday.”

The email suggested that employees who could not work from home stay in the office building throughout the day, and postpone activity in the city and protest areas.

If employees left the building, the email suggested they remove their lanyard and any branded clothing that would identify them as WorkSafe employees. They were advised not to use WorkSafe branded vehicles. 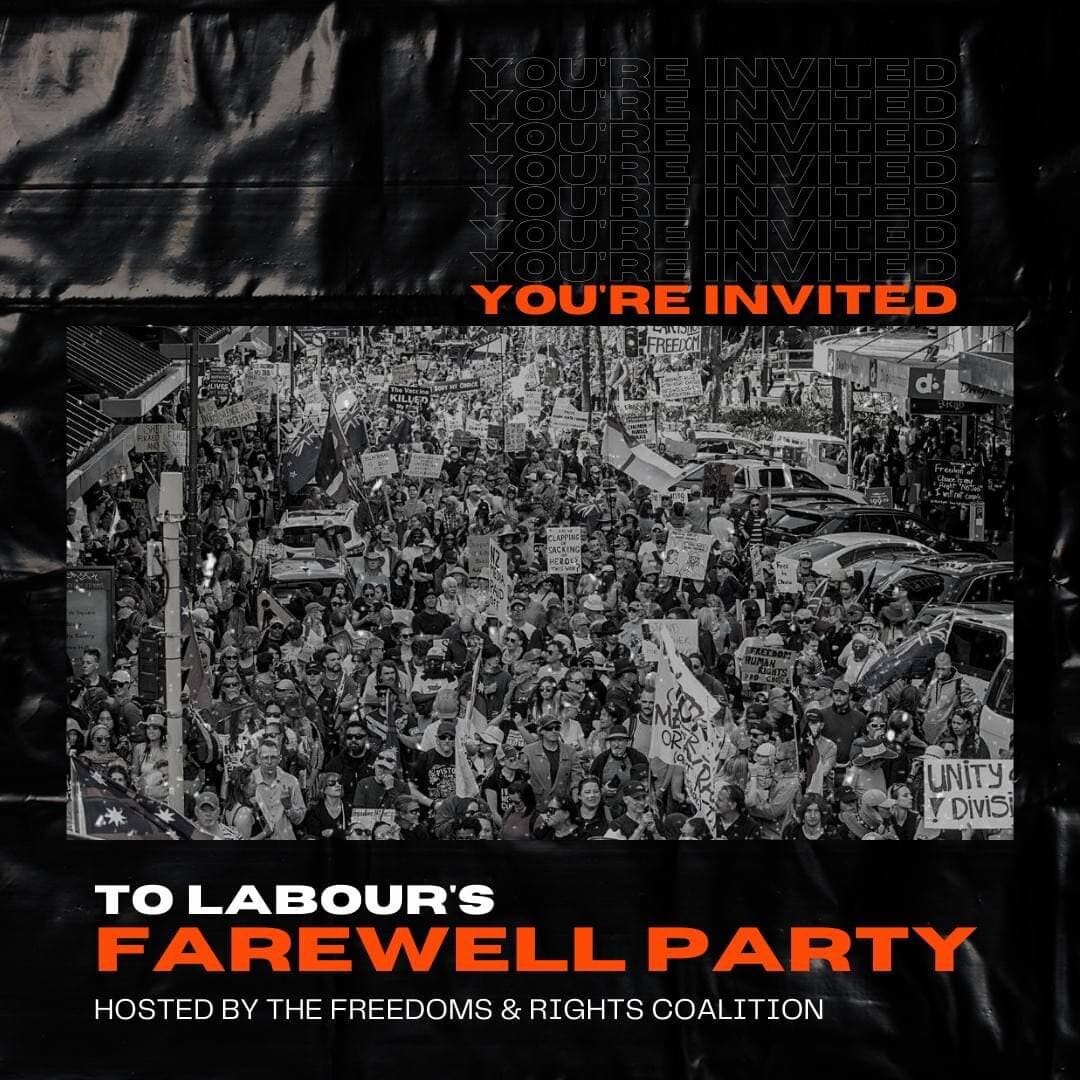 Parliament closed yesterday, a day early, because if this. The Freedom and Rights Coalition is a coalition. Brian Tamaki is part of it. There is a high change he will be arrested today.

Posts on the group’s social media pages suggest protesters will meet at Civic Square at 10.30am, before marching to an empty Parliament, where the final adjournment debate for the year was held yesterday.

Organisers called for the protest, which is against vaccine mandates and Covid-19 restrictions, to be peaceful.

It’s understood groups from around the North Island, including from Auckland, are travelling to the capital to attend the protest. 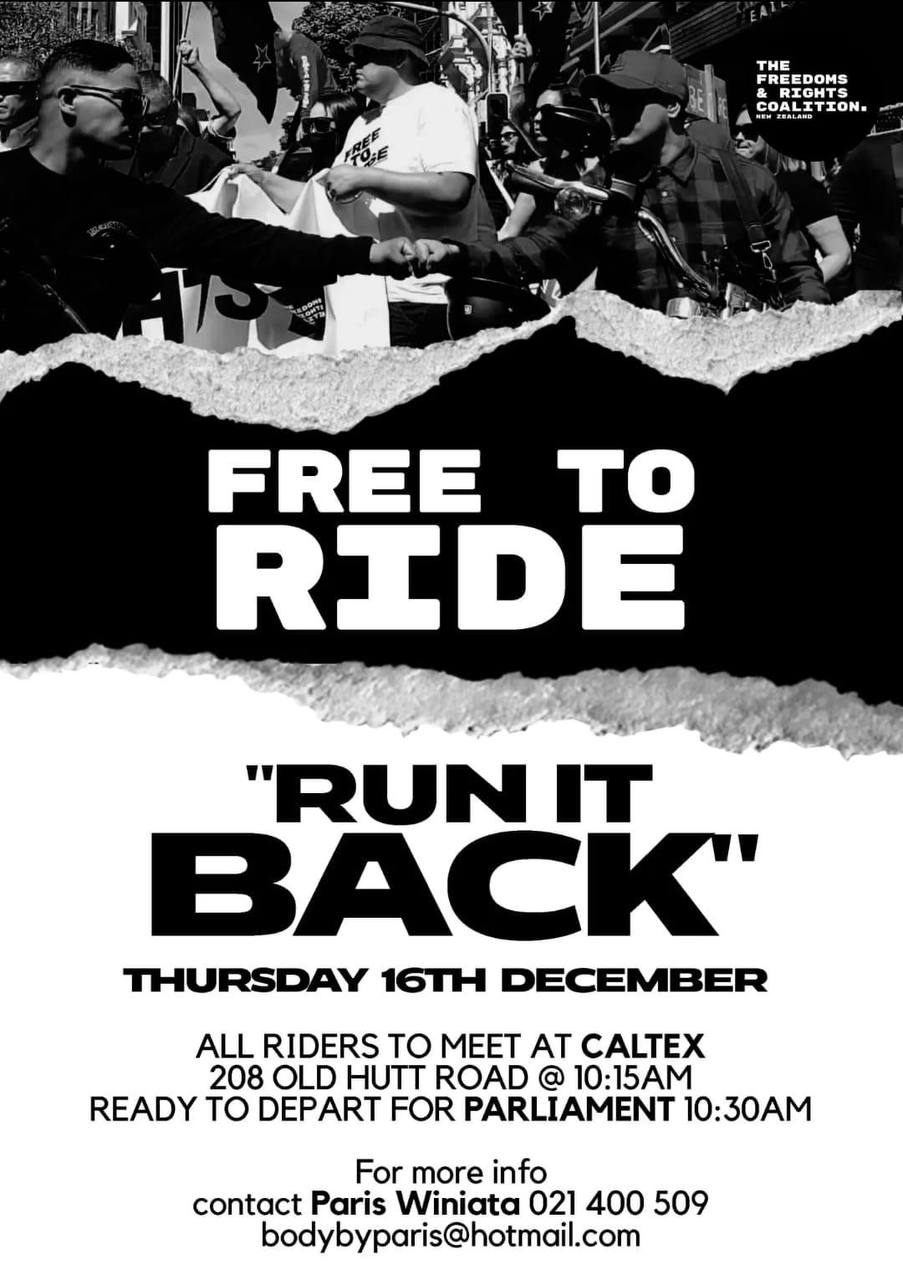 Reports say that it was about the same size as previously, tens of thousands. 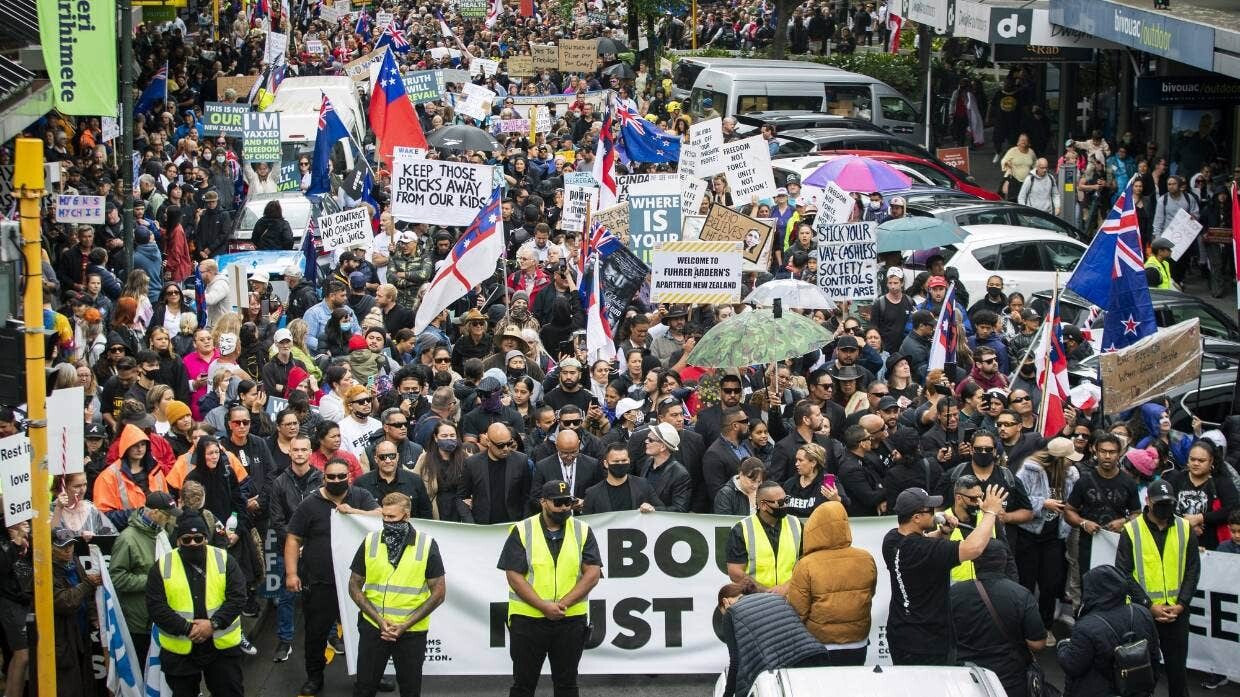 The mainstream media were at their usual mocking best.

Police prepared for a riot and protestors had threatened to storm the Parliament. One speaker raised the prospect of bringing weapons.

It prompted concerning flashbacks to the January 6 Capitol riots in the United States.

But the threats never eventuated. The crowd was expected to exceed November’s mammoth protest at Parliament as Aucklanders could finally breach their border.

The numbers never eventuated either – underwhelming under their umbrellas.

But it was too overwhelming for one – police removing a man who collapsed in the crowd.

Despite the lower turnout, the outrage was still turned up.

All the fury was a futile effort. The protestors paraded to a Parliament with no politicians.

The Parliament closed down for the year on Wednesday.

Background from a political insider

Cameron Slater was born into a political family and has been around Members of Parliament and Ministers of the Crown all his life. He does not have a very high opinion of most of them. He notes who has stood by him when he had health difficulties: he notes who cannot deal with their own decisions. But he’s only dealt with one who has embraced Evil. Our current PM.

Which brings me to the exception. Jacinda Ardern.

When I had that three hour lunch with her I came away thinking that this woman makes a lot of sound and thinks she sounds informed and interested about the world and politics. But on reflection, at the time, I said to David Farrar, who was also there, that she was just mouthing slogans and platitudes. Bumper sticker slogans and rehearsed lines. There was no depth there, and there still isn’t.

She is my exception, the one I believe is actually evil, and here is why I believe that.

She is fake, more fake than a $10 copy watch bought in the back alleys of Hong Kong. She has claimed many, many things, like all politicians, about why she entered politics. She professes wanting to end child poverty; she even made herself the minister in charge of ending child poverty. She also claimed that climate change was her generation’s nuclear free moment. On both of those claimed driving forces for her entering politics she has failed massively and comprehensively. All the child poverty statistics are either materially worse or have barely budged. Her climate change commitments are joke. She wrecked an industry on a Captain’s Call and then presided over the largest imports of coal we have ever seen, into a country that is sitting on huge coal reserves. Every single signature election promise has been an abject failure. She told people she was going to make houses more affordable; their cost has more than doubled. She promised to build 100,000 Kiwibuild homes, but it turned out that she couldn’t build a house in a room full of Lego. She promised light rail to the airport and has failed to lay even a single centimetre of track. None of those things are evil, but they are all dishonest and show a predilection towards failure after bold promises.

She told us that she never lies, which was a lie. But since taking power she has grabbed unprecedented additional powers, moreso than even Robert Muldoon. With that power she locked us up, removed our freedoms and told us all it was for our health. Never before in the history of the world have so many healthy people been locked up and had their freedoms taken away, all on the pretext of protecting our health.

It was all to flatten the curve, she said, then to protect the hospitals, then to save granny, then it would be short and sharp, and it ended up being the longest lockdown ever. It was all lies. If we needed more capacity in the hospitals then why haven’t they provided it? Why did they spend $55 million on bribing and corrupting the media instead of building a purpose-built ICU-only hospital in Auckland? Why did they fund cameras on fishing boats and wallaby pest eradication instead of hiring more nurses?

It was never about health; otherwise the billions spent subsidising businesses to stay closed could have instead been spent on hospitals and health care. It was all about control and manipulation. She has gaslit everyone while smiling and frowning and stealing away your rights, your freedoms, and your democracy.

Her lockdowns have cost people their lives, postponed life-saving operations and cancer treatment, destroyed businesses, wrecked careers and worst of all scared people into being irrationally afraid, especially the children. Even though that is evil, that isn’t the real evil of this woman.

The real evil was her politicisation of the Police force, coupled with her draconian lockdown rules, the creation of a Stasi-like snitch culture, creating a situation where mates are turned against mates, families are splintered and rent apart by the medical apartheid she has implemented; and her scapegoating, demonising and radicalising the unvaccinated and destroying social cohesion with her divisive, nasty, evil policies.

Taken from his website, a commentator put up the Adernist security priorities for 2022.

The woke run this place

James Allan is always worth a read. He notes that the woke witch hunt is after scalps. In Casa Kea, we are strategizing how to avoid them. Only the woke are now allowed into the Royal Society of NZ.

I don’t my theological heresy trials. But the bases of these is Christ, not what the woke say.

When a government working group proposed that Maori mythology be placed on the same level as modern science, seven eminent scientists wrote a letter ‘In Defence of Science’ (one of them being part-Maori himself and an eminent biochemist). This anodyne letter, with its patently true claims that Maori mythology is not science, led to the all too-typical cancel culture on steroids. The letter writers were denounced by all sorts of the great and good, including by the vice-chancellor of Auckland University (grounds for the VC to be dismissed immediately in my view). Worst of all, the New Zealand Royal Society (which has Kiwi roots going back to 1867 and back to Britain and such luminaries as Joseph Banks and Christopher Wren before that) opted to take up a complaint against these ‘heretics’, a complaint that – disgracefully and shamefully – was signed by more than 2,000 New Zealand academics. A panel has been set up to investigate.

What bollocks! If someone wrote a letter saying creationism and its proponents were not advancing a scientific theory no one in the Royal Society would bat an eyelid. That’s because such views about the empirical world have no truth content. Same goes for Maori mythology. So either these couple of thousand Kiwi academics and the upper echelons of the Royal Society (which should have laughed this complaint out of court) are stupid and know nothing about the scientific worldview. Or, and this for most of them is the real answer, they are pusillanimous cowards. Like me they are perfectly aware of the difference between pseudo-religious claims about the world and scientific ones that involve falsifiable hypotheses.

But they are afraid to go against the modern world’s equivalent of the Church, deeming what can and cannot be said. 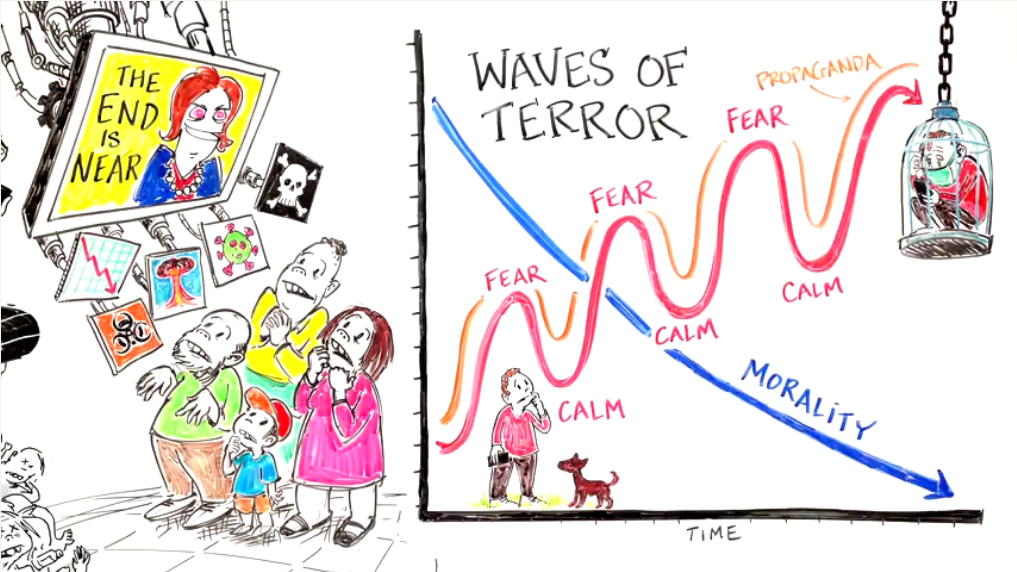 Time to walk away.

The lesson, as always, is this: stand fast, stay pure, and don’t submit. The wicked WILL fail, no matter how they thunder and bluff in an attempt to coerce you through fear.

Could not have said it better.